Tulane A-Z
Home / She gave her kidney to a stranger. Now, Tulane Law student wants others to follow

She gave her kidney to a stranger. Now, Tulane Law student wants others to follow 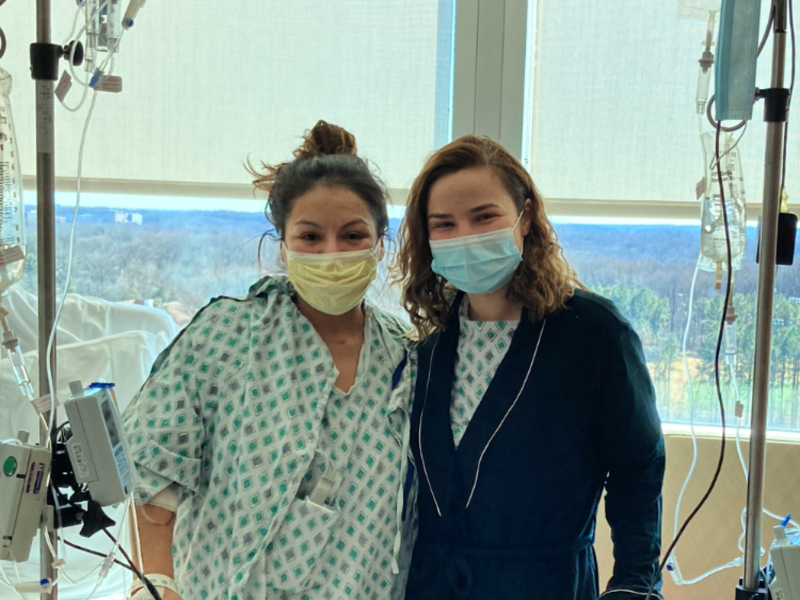 Giselle Buendia (L) received a healthy kidney from Rowan Bienes (L'24); they met a day after surgery. The two have become friends, both grateful for the new bond they share. (Photos courtesy of Rowan Bienes).

Last spring, a month after applying to Tulane Law School, Rowan Bienes was in an Arlington-area hospital, heading into the operating room to remove one of her kidneys.

That morning, the staff at the Inova Fairfax Kidney Transplant Center lined the hallways as Bienes was wheeled by, clapping, and holding signs. Not All Superheroes Wear Capes. Let Life Bloom.

Within a few hours, another woman – a stranger – was alive with the gift of Bienes’ healthy kidney. Bienes (L'24) is a living organ donor.

“It was something that I understood was a huge commitment but also completely within my power to do,” said Bienes, 23, a first-year Tulane Law student. “I’m grateful that I could do it, that I was approved to do it, and I hope it raises awareness about living organ donation.”

This immense act of selflessness – to be a healthy person willing to donate an organ to another – comes with a back story, of course. Bienes’ father had a younger sister who received two kidney transplants from family, but she died due to the severity of her illness.

After finishing her undergraduate degree at Tulane in 2018, Bienes, then a personal trainer, worked with with a client who was a living donor to help the woman prepare for the surgery and recover after.

“I was well aware of non-directed donations,” she said, referring to donors who do not earmark their organ to anyone. Bienes put no restrictions on who would get her kidney.

Such organ donations generally are anonymous; other than covering a donor’s medical, travel and living expenses while they recover from surgery, donors are not paid. And donors may never know the recipient’s name. Both must consent to meet, and then only after surgery.

But that’s not what happened in Bienes’ case.

A day after surgery, a nurse brought her a card from the young woman who received her kidney. She was recovering in a room down the hall, and she wanted to meet Bienes.

Her name was Giselle Buendia, and she was a 33-year-old pastry chef whose kidneys stopped working properly in 2014.

The moment they met each other, they hugged, violating all hospital protocols. But how could they not?

“There were lots of tears! Everyone, me, Giselle, my mom, the nurses, we were all crying,” said Bienes. “Giselle couldn’t understand why anyone would do that for a total stranger. She didn’t think until she came out of surgery that she would have a new kidney. She just didn’t want to get her hopes up.”

Since then, Buendia and Bienes have become friends. They keep in touch. They text each other. They went for Giselle’s first hike together and chatted the first day she was able to eat an orange in years. There are plans for a future “first time at Disney” trip.

“It’s amazing to see her flourish and to be a part of that is amazing,” said Bienes. “It’s why I wish more people knew what organ donation is like. I knew I would be OK afterward. And it made all the difference in another person’s life.”

While the process of organ donation is rigorous – there is medical and psychological testing along with criteria to determine if you are a match – it’s worth it, said Bienes. Now in New Orleans, navigating law school, she is considering donating a small part of her liver, which would be implanted into a recipient. Both the donor and the recipient’s livers will grow to a normal size in a few weeks.

“I feel that if people knew more about organ donation, they would want to help,” Bienes said. “Raising awareness is so important to me.”

As for her law career, Bienes is focused on public interest law – her passion. She hopes along the way she can continue to raise awareness for organ donation and help patients and donors in a pro bono advocacy role.

Two weeks ago, Buendia started working again – she is a receptionist at Inova, the hospital that performed the transplant surgery. It's a new chapter in her life.

Bienes is overjoyed to know that. She is grateful for how organ donation changed her life, and for the people who made it possible.

“My family and friends were amazing and supported me during my organ donation,” Bienes said. “If someone's loved one is considering living organ donation, I can say first-hand that having support for donation means the world and supporting that decision may make the difference in changing, or saving, someone else's life."