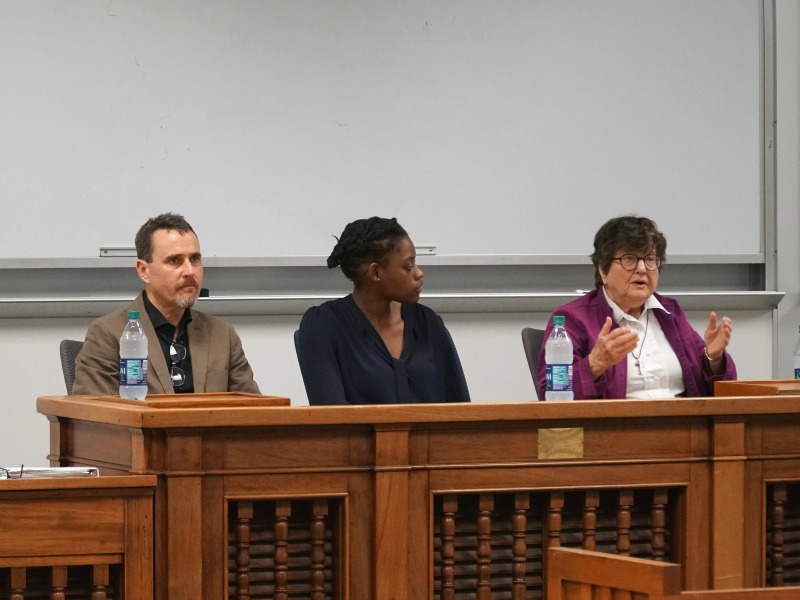 In the 35 years she’s been advocating against the death penalty, Sister Helen Prejean, the Catholic nun featured in the movie “Dead Man Walking” has not found anyone on death row who deserves to die.

“To watch someone be strapped down and their life ended, it is an overwhelming thing,” said Prejean, who has served as a spiritual advisor to six men who were executed. “And it is wrong. We are always capable of change."

She believes Louisiana will overturn the death penalty – and soon. Things have been changing, she said, with fewer executions happening than ever before as public sentiment changes towards capital punishment – and as more cases of wrongful convictions and flawed trials come to light.

Louisiana, with more than 70 on death row,  has not executed an inmate since 2010; drug manufacturers have been increasingly reluctant to provide the drugs used in lethal injections.

Prejean was a highlight in a moving and insightful panel hosted by Tulane Law School March 11. Titled "Ending Capital Punishment” and moderated by Tulane Law Prof. Janet “Jancy” Hoeffel, Prejean joined panelists Zachary Lazar, a novelist and professor of English at Tulane and author of Vengeance; and Capital Appeals Project lawyer Shanita Farris, who argues the appeals and parole hearings of those on death row.

More photos of the event can be found here.

The panel was organized by the Tulane Criminal Law Society to hear from those who are on the front lines of the movement to end the death penalty in this country, said Hoeffel.

“In an era when the public has been exposed to the problems of over-incarceration, wrongful convictions, and racial bias in the criminal justice system, the time is ripe for state legislatures to repeal the death penalty,” Hoeffel said. “All three of these speakers presented a different perspective on why this procedure should end.”

Lazar spoke about the contract killing of his own father when he was 6 years old, and how that permeated his life and influenced his work. At some point, while visiting the Louisiana State Penitentiary at Angola to watch prisoners perform a play on the Passion of Christ, he began speaking to them and had a life-changing experience.

“I spoke about things with them that I would not talk about with anyone else. It was emotional and deep and it changed my perspective,” Lazar said. “I learned that our system should not be binary (right vs wrong, good vs bad). The more you think about that in a philosophical way, that we’re not certain categories, you realize these labels are not helpful or useful.”

In short, Lazar saw the layers of trauma for both prisoners and victims, and that there is hope for redemption.

Shanita Farris is an attorney in the trenches – she fights to keep people from execution as a Capital Appeals Project lawyer. She described the heart-wrenching details in the lives of those accused of murder: Extreme and consistent abuse as children, undiagnosed mental health issues, low IQ, homelessness, hunger, abandonment. She also spoke about the broken criminal justice system, where many defendants -- often poor --  don’t get fair trials.

“My job is to humanize our offenders, to paint of picture of what they suffered,” Farris said.

Prejean added to Farris’ observations, saying the majority of death penalty convictions in Louisiana are overturned on procedure and  that the system is unbalanced against the poor, who often fail to get proper representation by overburdened public defenders.

She also said in the equation, victims and their families cannot be forgotten and that she always tries to reach out to those families, though often rejected. Some are inconsolable and furious, and she doesn’t blame them. But there are some who are willing. She described one father who told her he finally had to let go of his anger, because otherwise, it would kill him – and the goodness in his heart – too.

“The victims’ families have taught me more about forgiveness than anyone,” she said.