Six women are free because of the Tulane Women's Prison Project 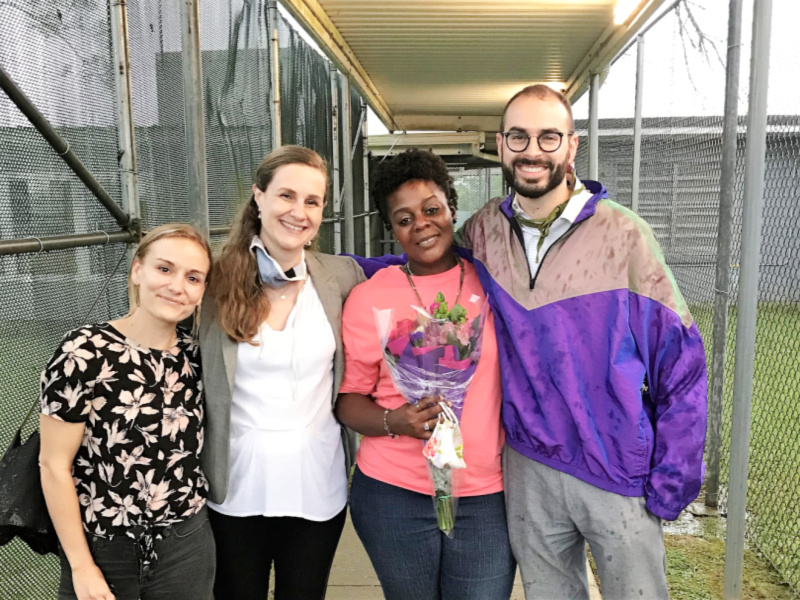 Candice served more than 13 years of a life sentence after she shot her abusive boyfriend during a struggle over a gun as she tried to escape his attack. She was freed in May.

In each case a woman used deadly force to defend herself against intimate partner violence or sexual assault and survived. Each faced the same legal fate: life without the possibility of parole.

Now, thanks to Tulane’s Women’s Prison Project, six survivors of gender-based violence unjustly serving or facing life without parole sentences have been freed.

During its first two years, the WPP – launched in 2020 with almost $2 million in donor gifts – has won relief for multiple women serving or facing life without parole after defending themselves from a violent attack. One woman was fully exonerated; two women were granted clemency; two were freed on a post-conviction claim; and in one case, a grand jury refused to charge, despite an initial arrest for second degree murder.

“When the program started, we never could have imagined that its impact would be so wide and so fast,” said Tulane Law School Dean David Meyer.  “The pace of its successes is impressive, but also deeply disturbing - it reflects the shocking scale of past injustice and the long-standing lack of resources previously available to incarcerated women in Louisiana.”

Professor Becki Kondkar, who co-directs the Women’s Prison Project with Professor Katherine Mattes, underscored the extent to which both gender bias and racism have given rise to injustices like those the Project seeks to address.

“These cases lay bare the stark reality that our self-defense and stand-your-ground laws are applied inequitably to women,” Kondkar said. “We know that the most dangerous time for women is when they leave or try to escape. But what we see time and time again is that when women can’t escape - when they instead must fight for their lives - they are punished. Flight from one’s own home is often not even possible, nor is it something our laws require. But legal and social disparities continue to mean that only certain people - primarily white men – legally benefit from our self-defense laws.”

Many of the women were charged and convicted at a time when victims of domestic violence received little legal protection and the dynamics of partner violence were poorly understood or ignored said Mattes.  Yet these problems persist even today: one WPP client was charged as recently as last year. The cases the WPP is working on are not isolated miscarriages of justice, the professors say.

“Each of these clients, along with many more still incarcerated, were trapped by a criminal legal system that was stacked against them at every level,” Mattes said.  “At each level – the legislature, law enforcement, prosecutors, defense attorneys and judges – the stories of these women were not understood and were not heard.”

The work --  hearing the horrific stories and slogging through old documents to build a case --  is difficult. It deeply impacts law students, including Courtney Crowell (L’19), who was one of the first student-attorneys to represent a WPP client while in law school; today, Courtney continues to work with WPP through pro bono service. And, then there are students like Claire Burkes (L’20), who dive into the work as a career. She is currently a Lutz Fellow working in Southeast Louisiana Legal Service’s Domestic Violence Unit.

Today, the WPP has grown to include not just Kondkar and Mattes and a handful of student-attorneys. WPP now is home to a team of advocates who have played essential roles in helping to free clients, including Professors Stas Moroz and Carlotta Leppingwell (who handled several of the six cases), Kathryn Pusateri, a paralegal, Emily Beasley, an investigator, Kesana Durand (L'09), the grant administrator/administrative director, and Imani Richardson, a law and policy advocate.

The team works together closely,  tirelessly pursuing their clients’ cases – even those some thought hopeless. Here are some of those stories.

Betty served 38 years of a life without parole sentence after her conviction for murder.  She was accused of killing an acquaintance who threatened her with a gun and sexually assaulted her in her own home.

At trial, prosecutors blamed her for failing to run away from her own home, and even worse, asserted that she was “sort of asking for it.”

When Betty went to prison, she left behind three children.  Today she is 75 with two surviving children, nine grandchildren and 18 great-grandchildren.”

In July 2020, the WPP secured clemency for 50-year-old Sandra, who was freed after serving 25 years of a life sentence.  Convicted by a non-unanimous jury – a practice since ruled unconstitutional by the U.S. Supreme Court – she was sentenced to life for killing her abusive estranged boyfriend who forced his way into her home and attacked her.

During her time in prison, she became one of the first women in the Louisiana Correctional Institute for Women to earn a bachelor’s degree.  Her children, who were 4 and 7 when she went to prison, remained supportive of their mother and reunited with her upon her release.

In October 2020, Beatrice was released after serving 23 years of a life sentence with the help of the WPP, who won a recommendation of clemency for her from the state’s Pardon and Parole Board.

Beatrice, now 74, was convicted for the killing of her estranged boyfriend after he forced his way into her home and attacked her just hours after she had called police to make him leave.

While in prison, Beatrice launched the prison’s Chapel Library, finding resources for women grappling with histories of trauma and abuse.

In May 2021, the WPP secured freedom for Candice, who served more than 13 years of a life sentence after she shot her abusive boyfriend during a struggle over a gun as she tried to escape his attack.  Hours earlier, he had beaten and strangled the then-21-year-old Candice, leaving head-sized holes in the walls.  She too had been convicted by a non-unanimous jury.

On appeal, Candice’s conviction was upheld, despite the dissent of one judge who concluded her circumstance was a clear case of battering and self-defense.

While in prison, Candice became a vocal advocate for the plight of incarcerated women who are survivors of abuse. She never stopped fighting for her freedom. She is 34 years old.

In March 2021, a grand jury decided not to indict Dana, who killed her boyfriend in self-defense after he strangled her when she tried to leave. She was arrested for second-degree murder, and the WPP took her case before she was released on bond.

After months of legal advocacy that included working closely with experts, a grand jury declined to file charges and Dana is free.

In October 2021, Deborah walked out of the Louisiana Correctional Institute for Women after serving 27 years of a life sentence. She had been convicted of second-degree murder for stabbing her abusive boyfriend in the upper shoulder by a non-unanimous jury.

Before trial, Deborah spoke to her attorney just once, and he did not make an opening statement or call any other witnesses in her defense.

According to Mattes and Kondkar, only comprehensive reform will address the extent and magnitude of the problem these cases reveal.  Both say that injustices like these will persist because of Louisiana’s heavy reliance on mandatory sentencing for life without parole.

“Louisiana legally ‘disappears’ women like these and so many others. We sentence them to life without parole, and never revisit their cases again,” Kondkar said. “So the problem is not just the substance and application of our self-defense laws, it’s also Louisiana’s excessive reliance on mandatory sentencing.”

The WPP’s success has gained national attention.  The American College of Trial Lawyers honored the program with the prestigious Gumpert Award – given to one program each year --  that brought with it a $100,000 grant.

But there is much work ahead. WPP team member Durand (L’09) said the problem for many of these clients is that there are currently few legal avenues for revisiting cases that were decided long ago.

“Whether it’s 40 years or 4 minutes behind bars, that is not an appropriate response to someone who was defending themselves,” Durand said. “Our hope is that more Louisiana district attorneys will pro-actively choose to revisit these cases and right these wrongs.”