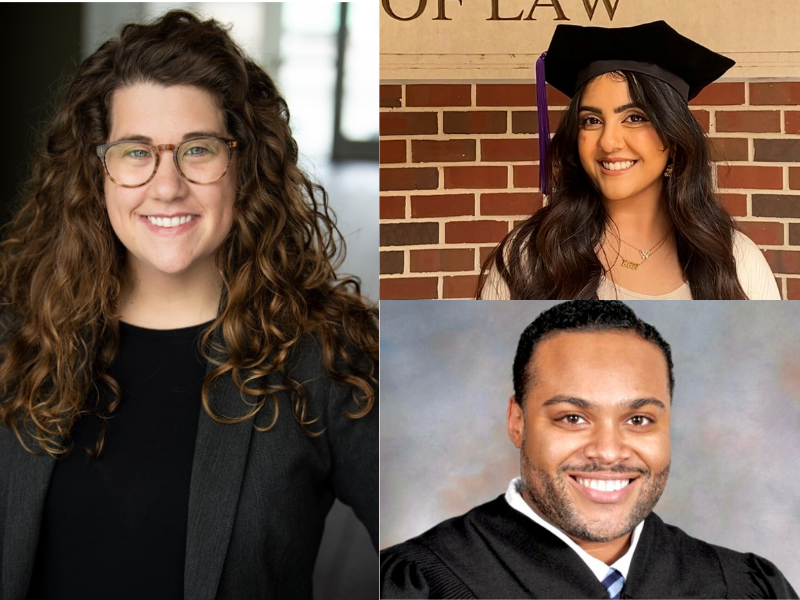 Third-year law students Noor Mozaffar, Sara Wood and Michelle Domingue all received the Tulane Crest Awards as part of the Division of Student Affairs’ annual honors of undergraduate and graduate students for their commitment and service beyond the university. The Crest Awards are a unified campus recognition of the efforts and achievements of students outside of the classroom, and recognized them for demonstrating excellence in leadership, scholarship, and community service, as well as initiative and promise in campus leadership. Nominations are made by students, faculty, and staff.

Noor Mozaffar received the Gary Lawton Fretwell Award, named for the former Associate Vice President for Student Affairs, which recognizes students who have served in leadership roles within student organizations and have contributed to the growth and success of the organization as well as the development of other students. Mozaffar joined Tulane’s Legal Assistance Program (TULAP) in her first year of law school and in her three years has become a co-director within the program. She also actively participated in the Public Interest Law Foundation (PILF), serving as its president and helping to address challenges to awarding public interest grants to students during and after the pandemic. Mozaffar also worked as a Harris Peer Mentor, helping other women of color navigate law school.

Sara Wood earned the coveted Service and Leadership Award. This award recognizes students who have made significant contributions to the New Orleans community through the combination of outstanding community service and leadership. Wood has worked as a law clerk at the Tulane University’s Legal Assistance Program (TULAP), the Tulane Immigrant Rights Clinic, the Promise of Justice Initiative’s Unanimous Jury Project, and this year is a student-attorney in the Tulane Criminal Justice Clinic helping represent clients in pre-and post-conviction efforts. Her dedication to improving the lives of the poor and marginalized in 2021 earned her the inaugural Ruth Bader Ginsburg Outstanding Law Student Award from the Women’s White Collar Defense Association.

Michelle Domingue took home the Dean Donald R. Moore Award. Named for the former Dean of Students Don Moore, this award recognizes students who have served in significant leadership positions during the year, have embodied servant leadership, and exhibit exceptional character. Domingue has been a Judicial Extern to the Hon. James L. Dennis, U.S. Court of Appeals for the Fifth Circuit; a research assistant with the Office of Career Development & Diversity Initiatives; an Administrative Justice of Academic Affairs & Alumni Relations with the Tulane's Moot Court Program and Chair of the Black Law Students Association (BLSA) Moot Court Program; and he was Head Coach of Tulane’s national champion Thurgood Marshall Appellate Team. Throughout his time at Tulane, Domingue has served his classmates both as a student leader and mentor, and dedicated his time to improving the experience of other students.