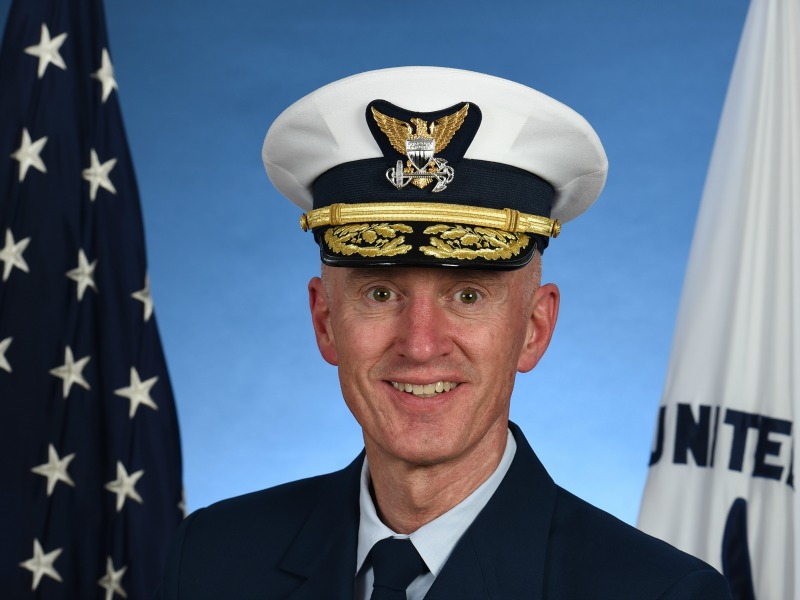 The lecture, titled  “Taking drugs off the water: Where domestic and international law converge,” was a broad summary of the Coast Guard's efforts at drug interdiction in the southern hemisphere.

Andersen discussed the international and maritime laws that enable his agency to work on drug interdiction (and occasionally human trafficking) far from U.S. shores under a multitude of agreements between countries accepted under maritime rules. Although the work is significant and makes a dent in slowing the drug trade, Andersen said it remains a herculean task to catch those moving drugs overseas. In 2017, the Coast Guard intercepted some 600,000 pounds of drugs.

Andersen assumed duties as the Judge Advocate General and Chief Counsel of the Coast Guard in July 2016.   His previous assignment was as Assistant Commandant for Intelligence with responsibility for the Coast Guard’s intelligence programs, including counterintelligence, cybersecurity, and cryptology. Prior to that he served for four years as the Commanding Officer of Legal Service Command in Norfolk, Va.

Other assignments in Andersen’s Coast Guard career include: a one-year deployment at NATO Training Mission-Afghanistan where he served as chief of anti-corruption; three years in command of Coast Guard Base - Portsmouth; Deputy Chief of the Maintenance and Logistics Command, Atlantic Legal Division; military judge; operational law attorney for Atlantic Area and the Fifth District; Assistant Legal Officer at the Seventh District Office in Miami.

Andersen began his career serving as student engineer aboard CGC STEADFAST, and as Commanding Officer on CGC CAPE KNOX and CGC STURGEON BAY. Andersen graduated from the U.S. Coast Guard Academy in 1985. He entered the Coast Guard legal program after receiving a Juris Doctor from George Mason University School of Law in 1997 and is a member of the Virginia Bar.  In 2012, the American Bar Association awarded him the Outstanding Military Service Career Judge Advocate Award.