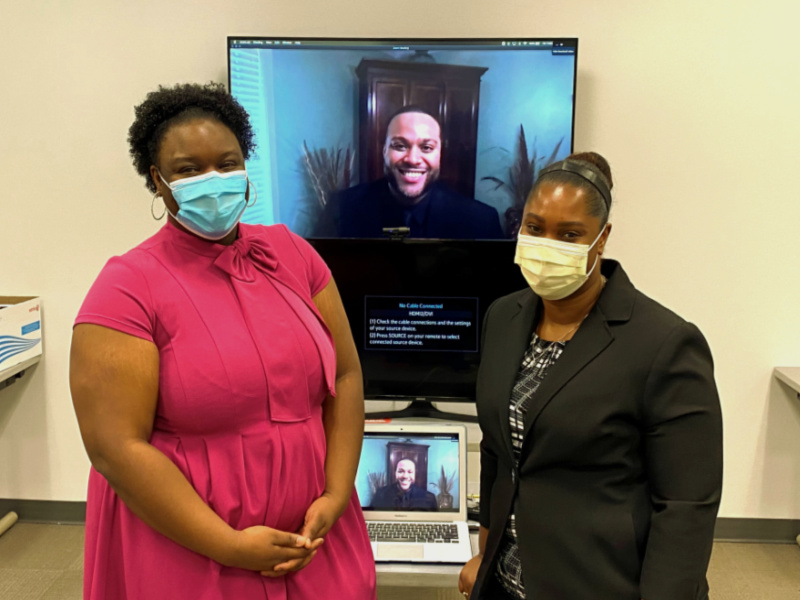 Moot Court competitions are all happening in a remote format these days. Pictured is BLSA team Coach Karli Wells (left), and teammates Aicha Kyria Aime-Marcelin and Michelle Domingue (on screen), who placed in the SWBLSA appellate competition and are headed to the nationals in March. The team won the competition's "best brief" honors and Domingue was named "best oralist."

Twice in as many years, Tulane’s Black Law Student Association Moot Court team has gone on to compete in the nationals.

During the weekend of Jan. 22, the Thurgood Marshall Appellate Team, comprised of teammates Aicha Kyria Aime-Marcelin (L’21) and Michelle Domingue (L’22), took third place in the Southwest Black Law Student Association Regional Competition (SWBLSA).  They will go on to the national competition in March which will be held remotely.

The team had two coaches, Karli Wells and Chris Williams-Lopez, both third-year law students, who helped them prepare and organize their arguments.  Andrea Ewalefo (L’21), a moot court member with a particular knack for seeing loose ends, helped them hone their arguments as well.

The team not only took “best brief” in the competition, but also Domingue took home the “top oralist” honor.

“Despite the many challenges presented this year, I am so proud of the hard work of our teams and all the coaches,” said Jayde Encalade (L’21) who is part-coach, part-advocate, part-mentor to the BLSA teams.

In the 2019-20, academic year, Tulane’s BLSA mock trial team placed in the national Constance Baker Motley Mock Trial competition and went on to the nationals.

The National Black Law Students Association has been around for more than 50 years and many prominent attorneys have come from its ranks. This year, Tulane has 17 students of color participating in its Moot Court program and competitions like the one hosted by SWBLSA.

“We are enormously proud of our BLSA students’ success, not only in performance but in preparation, coaching, and mentoring. These outstanding competitors inspire all of us to do more to open doors to those grossly under-represented in our profession,” said Stacy Seicshnaydre, Assoc. Dean of Experiential Learning.

Wells, a team coach, said that one of the important aspects of competing through BLSA is to be recognized among your peers. “Competing in a community that looks like you, having black judges provide feedback – it all speaks to the idea of being recognized and supported by those whose experiences are similar to yours.”

Aime-Marcelin is happy for the chance to compete. “It’s a great opportunity to present before judges and practice public speaking and the legal practice. It’s an experience for anyone who wants to develop their skills.”

The loss made him want to compete even more.

“He was with me through all of this competition. He was around when we were preparing the brief, when we were practicing. He asked me about it all the time; he was very proud,” Domingue said. “That I won best oralist is really a testament to his honor and resilience and encouragement of me.”