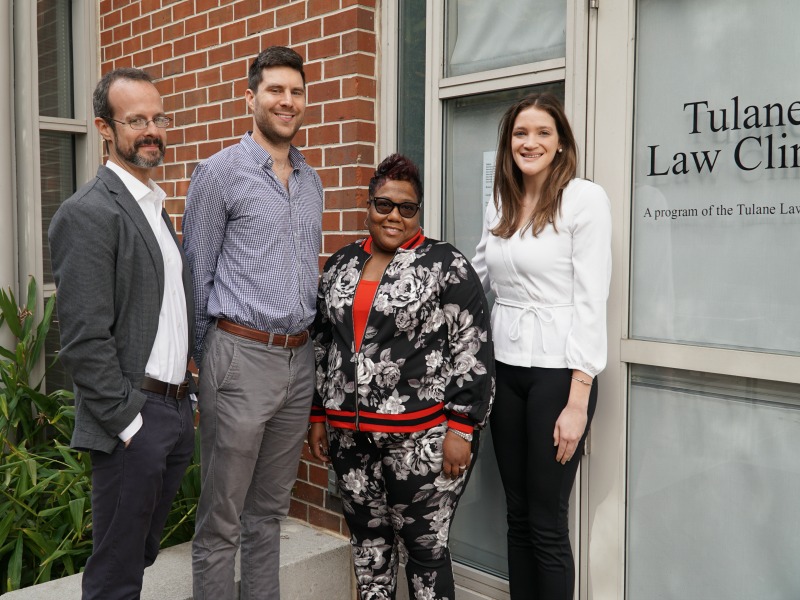 Bessie Hall (center) said she was grateful to the Tulane Civil Rights and Federal Practice Clinic for helping her receive benefits to which she was entitled, but was denied. Pictured with her is Clinical Instructor Sam Brandao (L'12), far left, and third-year law student attorneys Jonah Seligman (left) and Michelle Sloss, far right. (Photo credit: Alina Hernandez)

To meet Bessie Hall is to know persistence, and perseverance.

In 2012, Hall had to retire from her job at the Louisiana Department of Children and Family Services after 17 years following an injury from a fall.

But when she tried to apply for disability benefits some time later, the Louisiana State Employees Retirement System (LASERS) refused to process her application. The state had for years followed a policy that employees with more than 10 years of service, but fewer than 20, were eligible for disability only if they applied while still employed.

That didn’t sit right with Hall so she took them to court.

“When I know I’m right, I keep on pushing,” said Hall, who represented herself at first in challenging agency decisions related to her termination. “It’s not even about the money. I just knew it was wrong.”

A federal judge took note of Hall’s efforts and appointed the Tulane Civil Rights and Federal Practice Clinic to help her in her court case and to apply for benefits. “It’s truly impressive,” said Samuel Brandao (L’12), a clinical instructor with the clinic, who has supervised student attorneys on the case. “It’s a credit to Ms. Hall that she did all that legal work, survived several efforts to dismiss her case – and managed to catch a judge’s attention.”

Hall and the clinic students worked together pointing out that LASERS cannot force someone to apply for disability while still employed. Not every newly-disabled person will be able to complete that paperwork under a tight deadline – especially if they have little or no leave, or if their disability involves hospitalization or incapacity.

In fact, the clinic argued, state law provides both for applications during employment and also for post-termination applications, with the latter category held to an additional requirement: Proving that the disabling injury happened before termination, not after. “But LASERS’ interpretation of the law ignored that section with the additional burden of proof to show when someone was hurt,” Brandao said. “We can’t ignore parts of statutes—the law says you can’t do that.”

The clinic and Hall won in every venue – first in district court, later in the First Circuit Court of Appeal and finally, this fall, when the Supreme Court declined to take up the case, allowing lower court rulings to stand. 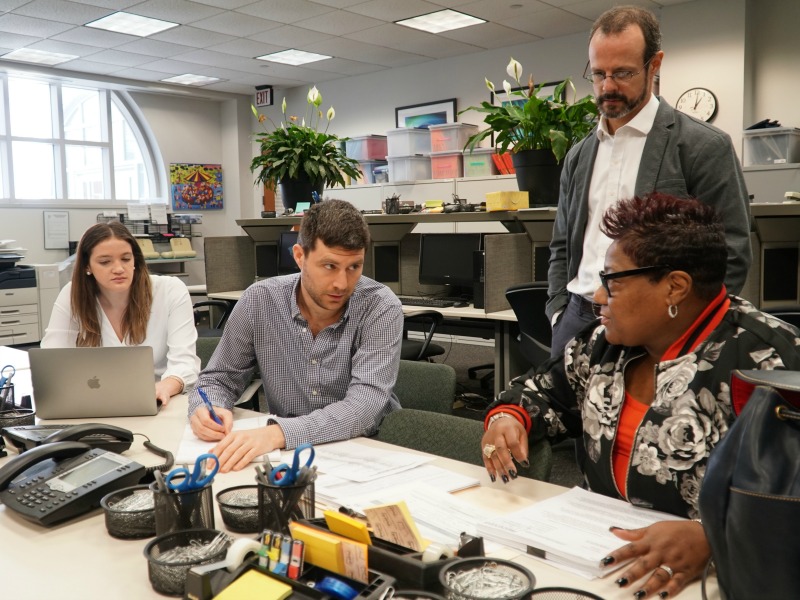 “It wasn’t easy,” said Hall, who lost both her husband and son within months in 2015. “This event changed my quality of life. But I am grateful the clinic took some of the burden off me, and I am so appreciative of the job they’ve done for me.”

The win has broad implications for future retirees, and could affect many others who, like Hall, have between 10-19 years of service, and who became disabled while serving the state, but either never applied or were told their disability applications were never processed, Brandao said.

“It could be hundreds, but we don’t know how many people this will affect since the state’s longstanding interpretation was wrong,” he said.

In December, Hall finally saw her first disability payment from the state retirement agency. “From 2012 to 2019,” she said of the time her battle has taken. “I feel good that we finally got them to do the right thing.”

The clinic takes on cases -- usually at the request of non-profits or by court appointment -- that  span prisoners’ rights, housing and employment discrimination and violations of civil liberties. They recently received the inaugural Fair Housing Hero Award from the Greater New Orleans Fair Housing Action Center.

The most recent student attorneys working on Hall's case said they learned a lot about the importance of the law.

“It’s shown me just how long a process for any bureaucratic benefit can take,” said third-year law student Michelle Sloss. “The clinic has had this case for years and we came in and  had the satisfaction of seeing the Supreme Court deny the state’s request for appeal. There is huge credit due to students before us, and our supervisors, and to Ms. Hall.”

Both students have immense gratitude to the clinical faculty who prepared them for the case.

“It was a great experience to empower a person to achieve justice,” said Jonah Seligman, Hall’s other student-attorney. “But there is also something you don’t get from a classroom text – that human-to-human connection with a real person behind the case. That’s the most special thing to me, and one I won’t forget.”

The clinic taught both more than they expected.

“Ten times what I learned in the classroom,” said Sloss. “Your case is 24-7. It’s always on your mind, and we’re passionate about our clients. I suspect that’s what it’s like to practice law.”

And there is the teamwork.

“In the classroom, we work on our own and, in some ways, we’re competing for grades,” Seligman said. “But in the clinic, it’s all about collaboration, working together and focusing on the needs of another person. There is brilliant mentorship from our supervisors. And, the chance to be challenged to think through a situation.”