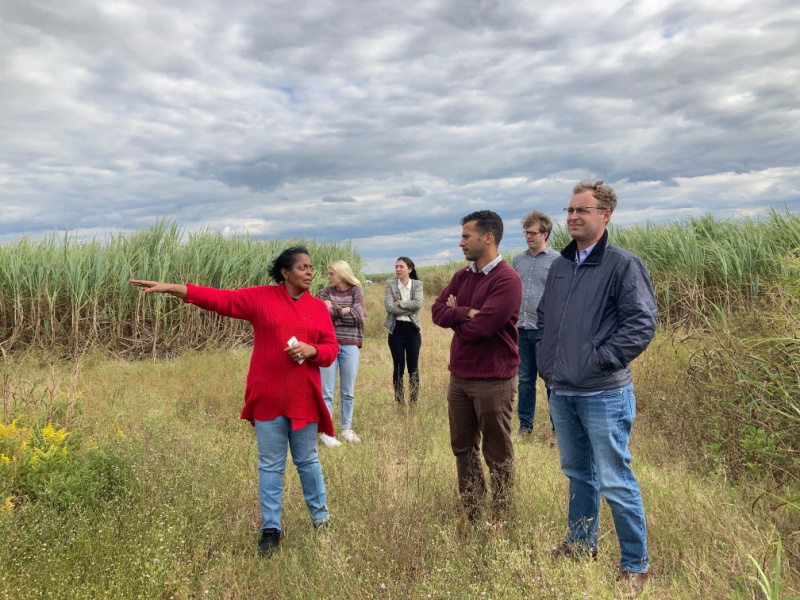 When EPA Chief Michael Regan began a listening tour to address systemic environmental injustices across the U.S., his journey took him to Louisiana – and to the clients, students and faculty of the Tulane Environmental Law Clinic.

Regan dedicated fully half of the four-day “Journey to Justice” tour to sites in Louisiana where disproportionately poor and minority communities are contending with the impacts of industrial pollution and other hazards. In stops in New Orleans and in rural, predominantly African American communities upriver and west to Calcasieu Parish, Regan repeatedly met clients of Tulane’s clinic and was briefed by clinic faculty and students on their work.

In New Orleans, Regan met with residents of Gordon Plaza, a predominantly Black community whose homes were built atop a toxic landfill and who have been fighting for years, with help from Tulane student-attorneys, to win relief from the city.  Earlier this year the City Council approved $35 million to relocate residents still living on the landfill.

In all, the EPA Administrator met with five different groups represented by the Clinic: Mossville community members, RISE St. James, the Residents of Gordon Plaza, the Concerned Citizens of St. John, and Wallace community members. The number of cases across the state that involved Tulane Law student-attorneys and advocates is just one indicator of the Clinic’s important role in the state and in national debates over environmental justice.

“For years Clinic clients living in Louisiana’s industrial corridor and other overburdened communities have come to us to try to put a stop to the persistent, cumulative exposure to pollution they experience,” said Professor Lisa Jordan, the Director of the Clinic. “Hundreds of our students have worked along many fronts to find legal remedies for these issues, and the communities have been tireless advocates for themselves. It is gratifying to see these efforts resonate with decision-makers in a position to effect real change.”

“We’ve made real progress in what used to be an uphill battle simply for acknowledgment of the burden industry imposes on communities,” said Jordan, the Clinic Director, adding, “but the challenge now is to convert this recognition into systemic change.”

The EPA’s visit with Clinic faculty and students came amid several recent victories for clinic clients:

The work of the Environmental Law Clinic is clear. First, like all of Tulane’s legal clinics, it teaches law students the legal skills necessary to be effective litigators and

advocates – strong written case briefs, well-researched oral arguments, effective communication with clients, and a sharp understanding of environmental law and the ability to advocate in court and before administrative and elected officials.

Second, the clinic represents clients who would otherwise be unable to afford legal counsel, often those who have struggled with the impacts of heavy industry in their communities.

Zoe Vogel (L’23) worked on the EPA complaint along with her classmate Elizabeth Cowan (L’23). Vogel specifically came to Tulane Law because she knew its expertise in environmental justice cases. And then she met the clients.

“Our clients have become some of my most valued educators, and it is an absolute honor to represent some of the country's foremost community environmental justice advocates,” she said. “The substantive nature of the EPA's recent Letter of Concern is a real testament to the work of these individuals and organizations. While any actionable outcomes are yet to be seen, it is an important recognition of both the work and lived experiences of these communities.”

When it comes to working on cases, students also get the full experience of lawyering in court.

David Ivy-Taylor (L’22) last spring argued the Formosa case as a student attorney for the Clinic. It solidified his passion for environmental law.

“Preparing and presenting the Formosa oral argument was the highlight of my law school experience. It was an enormous amount of work (by the whole team), but also enormously gratifying,” said Ivy-Taylor, who is now clerking with Judge Roland Belsome in the Louisiana 4th Circuit.

“Sitting down at the Plaintiff's table was a surreal and exhilarating moment. That day was made all the more meaningful when the ruling finally came out. I remember being on Cloud 9 for days, especially since Judge White adopted many of the arguments and themes we advocated in court.”

The biggest lesson he took from the whole experience was that environmental law can often be tedious, involving complicated facts and opaque scientific concepts, which requires the ability to contextualize the science in terms of real people's lives in a compelling way.

“You have to present difficult scientific concepts and complex statutory frameworks in a way that a court will relate to and find compelling,’’ said Ivy-Taylor. “However, when you frame the case in terms of environmental justice, the equities clarify and become much easier to understand.”

His advice for future environmental law student-advocates (besides speak slowly, and make every word count):

“Never give up. Environmental cases can take a long time, and it's often an uphill battle. That was certainly the case in Formosa. Keep your nose to the grindstone, know the facts, never stop advocating, and the law may surprise you with a good result.”