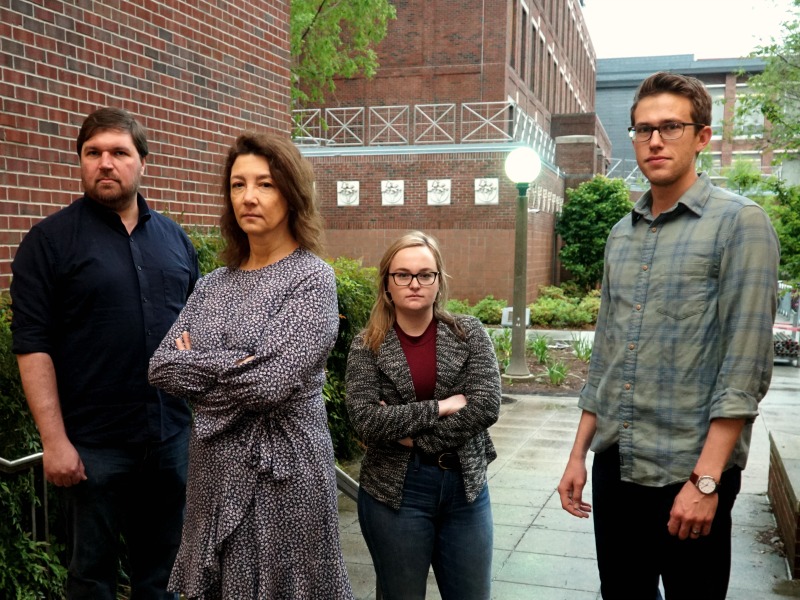 The Tulane Environmental Law Clinic took on the EPA in a case that will prevent more pollutants from going into North shore waterways. "We sought out the Tulane clinic largely because it has such a good grasp of the Clean Water Act which is a niche expertise," said Matt Rota (left), Senior Policy Director for Healthy Gulf, one of the clients the clinic represented. Clinic Director Lisa Jordan (center) worked with several student attorneys on the case, inlcuding Adrianna Culbreth (L'20) and Brian Broussard (L'19). (Photo credit: Alina Hernandez)

When it comes to the delicate balance of life in lakes, rivers and bayous, it’s really all about the oxygen.

So when the U.S. Environmental Protection Agency (EPA) approved a state rule in 2016 that would allow for more pollutants in the waterways of the North Shore of Lake Pontchartrain -- reducing dissolved oxygen levels to a precarious level -- environmental groups sought the help of Tulane’s Environmental Law Clinic, which sued.

The Clinic, which represents communities and clients facing environmental harm, won big in March, when a federal court invalidated the rule after EPA admitted it violated the law in its decision.

By cutting levels of dissolved oxygen in half, EPA enabled the state to issue industrial permits to dump greater amounts of certain pollutants – particularly from treated sewage – into those waterways. The more of these types of pollutants, the lower the dissolved oxygen levels, which harm already- threatened species in almost every stage of their lifecycle.

“EPA completely ignored the effect of this rule on the fish and wildlife that live in these streams, all the way down the food chain, including imperiled species entitled to extra protection under federal laws it is obligated to implement,” said Lisa Jordan, who directs the Tulane clinic and worked with a handful of student-attorneys in filing the 2018 lawsuit on behalf of the Healthy Gulf (formerly the Gulf Restoration Network), the Little Tchefuncte River Association, the Louisiana Environmental Action Network, Louisiana Audubon Council and the Sierra Club.

“When EPA told the state it could lower the dissolved oxygen levels to what we know are hypoxic levels, it also ignored the special status under its own regulations of some of the affected waters designated as Outstanding Natural Resource Waters, like the Tchefuncte River, Bayou Lacombe and Bayou Cane. Most people probably don’t even realize the effect that EPA’s decision would have on the quality of the rivers and streams they cherish and enjoy.”

In the ruling, the court said the EPA admitted it had violated the Endangered Species Act by failing to consult with U.S. Fish & Wildlife on the impact of the added pollutants on fish and shellfish populations protected under the Act, particularly the Gulf Sturgeon, whose habitat is along the affected waterways.

“We are glad that, through the court, we were able to restore to these waters the full protection of the laws. Many of these waters – like the Little Tchefuncte River, Cane Bayou, and Bayou LaBranche – are highly valued by our clients and the public at large for their beauty and recreational value,” Jordan said. “We hope EPA gets it right the second time around and rejects this harmful rule, which would result in more permits allowing increased pollution into these waters.”

The ruling is important to environmental advocates because it prevents more pollution from going into protected waterways and makes those who do liable to clean up the mess, said Matt Rota (TC'98), Senior Policy Director for Healthy Gulf.

“We sought out the Tulane clinic largely because it has such a good grasp of the Clean Water Act which is a niche expertise,” said Rota. “They helped us show that lowering these oxygen levels to half of what they were would only make it easier for pollutants to be discharged north and west of Lake Pontchartrain. And, the EPA simply did not properly justify the change.”

In part, Rota said, the EPA had wrongfully used the Louisiana Department of Environmental Quality’s erroneous comparisons of North Shore rivers and streams to another part of the state where conditions of waterways are completely different. For example, they compared the Little Tchefuncte River to swamps and marshes 50 to 100 miles away.

The EPA also failed to study the change in oxygen levels on the lifecycle of threatened species from mating to spawning to juvenile fish, Rota said.

For students, the taking of a case from filing suit, to motions to a win, was a lesson not soon forgotten.

“You don’t get this type of experience anywhere else,” said Adrianna Culbreth, a second-year law student who worked on the case. “The Environmental Clinic is a litigation clinic, so it allowed me the opportunity to learn how to respond to motions, file responses – you don’t get to do that until you’re in a full-time job and out of school. It was an amazing learning opportunity.”

Brian Broussard (L’19),  whose future plans involve working in an energy and environmental law firm, said he was most surprised by learning not just about law, but also about civil procedure, administrative law and litigation strategy.

“There are all areas you don’t necessarily think of,” he said. “But it’s extremely useful to learn how to work on a case, manage these issues, talk to a client, all first-hand.”