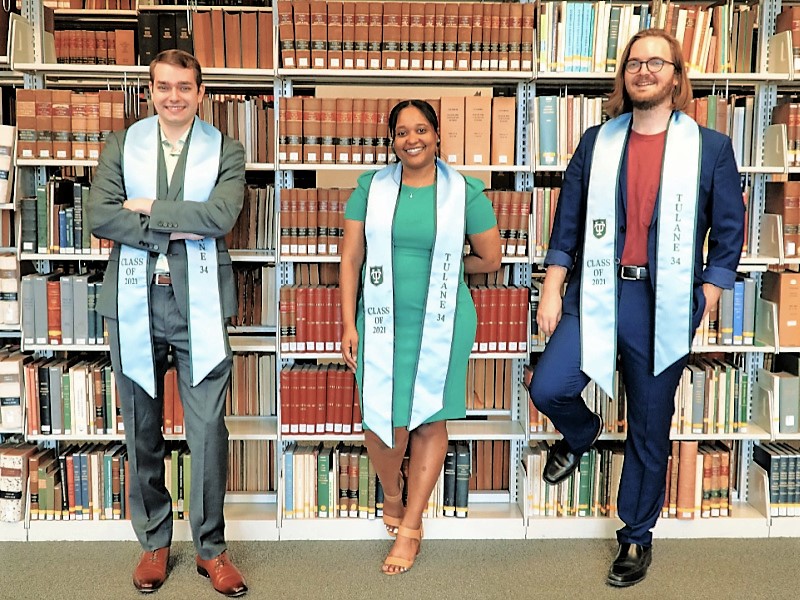 Jayde Encalade, Jacob McCarty and Brandon Sprague, all graduating third-year law students, have received the coveted “34” stole, and recognized for their outstanding contributions to Tulane Law.

For their leadership, dedication to scholarship and service to the law community, three remarkable Tulane Law students have been awarded the Tulane 34 Award.

Jayde Encalade, Jacob McCarty and Brandon Sprague, all graduating third-year law students, have received the coveted “34” stole, and recognized for their outstanding contributions to Tulane Law.

Named for the year 1834, when the university was founded, Tulane 34 is among the most coveted university-wide honors that a graduate can receive. Every year, the Tulane 34 Award is presented to 34 graduates who have distinguished themselves throughout their collegiate life at Tulane. Students can come from any school at Tulane and are recognized for their exemplary leadership, service and academic excellence.

To say she is a force of nature is an understatement.

Directly as a result of her efforts, Tulane’s Moot Court Program is more diverse than ever. There are – literally -- dozens of law students who have benefitted from her mentorship and support.

Before coming to law school, Encalade was a Teach for America Corps member. “It was that spirit of leadership and service that guided her path and the choices she made as a student at Tulane,” said Dean of Students Abigail Gaunt in her nomination letter.

As a second-year law student, Encalade was inducted into the Pro Bono Krewe for her more than 150 hours of pro bono service at the Tulane Legal Assistance Program (TULAP), the Orleans Public Defenders Office, and the Expungement Clinic hosted by the Justice and Accountability Center of Louisiana & The First 72+. Now in her third year, she continues her public service through her work in the Juvenile Rights Clinic.

But it is her efforts on behalf of the Tulane Law community that are immeasurable. In her second and third year, Encalade has been a Dean Rufus Harris Peer Fellow, an organization that mentors first-year law students. She has mentored students directly, but over the past year as a section leader, she coordinated events for more than 60 students.

Her efforts to support diverse students have perhaps had the greatest impact on the law school. As a student member of the law school’s Anti-Racism Task Force, she advocates for all minority students to bring about changes that lead to equity. She served as BLSA president during her second year, enacting several initiatives to engage with the local community and to support 1Ls during their first year of law school.

As the inaugural BLSA Moot Court Chair, she created a plan to integrate the BLSA program, recruit new members, and oversaw the program in its first year. Those efforts resulted in a significant increase in Black student participation in the Moot Court Program. She is also the Head Coach of the Mock Trial Team and has given more than 400 hours of training and support to competitors. She and her partner recently placed first in the National Trial Competition’s regional competition and advanced to the nationals.

After graduation, Encalade will serve as law clerk to Judge Karen Roby (L’87), Chief Magistrate Judge at the District Court for the Eastern District of Louisiana.

McCarty arrived in law school eager to build upon his five years of service at the Orleans Public Defenders – and he succeeded spectacularly.

“Jacob McCarty’s commitment to service and justice within his community is unwavering and resilient as demonstrated by his law school career,” Dean Gaunt wrote in her nominating letter.

He has worked tirelessly to serve others, both at school and in the community. McCarty served two years as a Harris Fellow and an Academic Support Program Tutor, mentoring and tutoring first-year students as they adjusted to the rigors of law school. And during his second year, he served as President of the Civil Law Society, connecting Tulane students with the New Orleans community and faculty members. In these roles, he happily offered guidance, support, and advice to his classmates. He readily volunteered his time to speak on panels for current or admitted students and established himself as a pillar in the law school community.

During his summers, McCarty continued to serve the public interest. During his first at the MacArthur Justice Center in New Orleans he worked on cases ranging from challenges to the death penalty to police abuse of protestor’s First Amendment rights. For his second summer, he worked for Brown Goldstein Levy, a Baltimore public interest firm focused on disability rights. In his final year of law school, Jacob practiced as a Student Attorney in the Criminal Justice Clinic, where he has represented indigent clients at both the pre-trial and post-conviction stages.

In addition to his record of service, McCarty— ranked third in his class—has excelled academically and professionally. He is a published author and a Notes & Comments Editor for the Tulane Law Review. As Chair of the Law Review’s Diversity Committee, he helped draft recommendations to change the journal’s membership selection process to enhance diversity and ensure the journal’s continued academic excellence.

In recognition for his service, fellow members awarded him the Charles Janvier II Tulane Law Review Award for significant contributions to publication excellence and the Conrad Meyer III Tulane Law Review Award for outstanding leadership skills and dedication. He also is the recipient of the David L. Herman Award for high professional standards in the law and CALI awards for Business Enterprises, Civil Law Property II, Community Property, Evidence, and Legal Profession.

After graduation, McCarty will serve as law clerk to Chief Judge Nannette Jolivette Brown (L’88) of the Eastern District of Louisiana. After finishing his clerkship, he plans to continue to honor the Tulane motto of non sibi, sed suis by practicing as a public defender in New Orleans.

A scholar and public servant, Sprague was the Editor in Chief of the Tulane Law Review during a tumultuous year of a pandemic and remote learning. Under his leadership, the 105-year-old publication revamped its membership selection processes, adding more opportunities for diverse voices to join the team.

At the same time, Sprague holds an appointment on the Board of Commissioners for the City of Kenner Housing Authority.  His academic achievements – he’s ranked 5th in his class – belie his extensive participation in multiple leadership and community service roles.

“Brandon’s record of academic achievement is remarkable as he successfully balanced the rigors of the law school curriculum with multiple leadership and community service roles,” wrote Dean Gaunt in her nomination letter.

A local – he is originally from Kenner -- he came to Tulane Law to focus on public service through government. In the summer before his first year, he volunteered at the Orleans Parish District Attorney’s Office, assisting the appellate and trial divisions, and in his next summer, he volunteered with the Environmental Division of the Louisiana Department of Justice. He also worked with Judge James Dennis on the U.S. Court of Appeals for the Fifth Circuit, researching and presenting cases to the judge.

On the Housing Board, Sprague works with the city to best serve its public housing residents. In May of 2020, the Tulane Law School Office of Experiential Learning and Public Interest Programs recognized Brandon as a Class of 2021 Pro Bono Rising Star for his exemplary commitment to pro bono legal work, recording a whopping 269 hours of service.

Within the Tulane community, Sprague has committed himself to academic excellence and mentorship. He came to Tulane Law through the 3+3 Program, in which he completed his first year of law school during his senior year as a Tulane undergraduate. Throughout law school, he has received four CALI Excellence for the Future Awards: Civil Procedure, Admiralty II, Civil Law Security Rights, and Contract Drafting. He mentored students through the Student Bar Association mentoring program and the Academic Support Program. This past semester he worked as a Research Assistant to Prof. Amy Gajda, and he has been active in the Civil Law Society.

But it was his time on the Law Review, where he has made his mark. As a junior member, his case note discussing a legal challenge to the “no-call” against the Saints during the 2019 NFC Championship was published in volume 94, and his comment comparing Louisiana’s property law with that of Chile, Ecuador, and the Netherlands in the context of coastal restoration was published in volume 95.

Sprague served this past year as the Editor in Chief of volume 95 of the Tulane Law Review, leading Tulane’s oldest journal. In April 2020, he worked to temporarily change the Review’s membership selection process to consider administrative and inequitable changes brought by the pandemic. He has since led the Review as it committed itself to promoting diverse voices among its members and scholarship. In August 2020, he appointed a Diversity Committee to research modern methods of selecting new members in ways that promote diversity. Following the distribution of the Committee’s report in January 2021, the Review adopted amendments to its membership selection process that take into account diverse backgrounds and test students on the skills needed for Review membership.

After graduation, Sprague will continue his public service by clerking for Judge Susie Morgan of the U.S. District Court for the Eastern District of Louisiana.