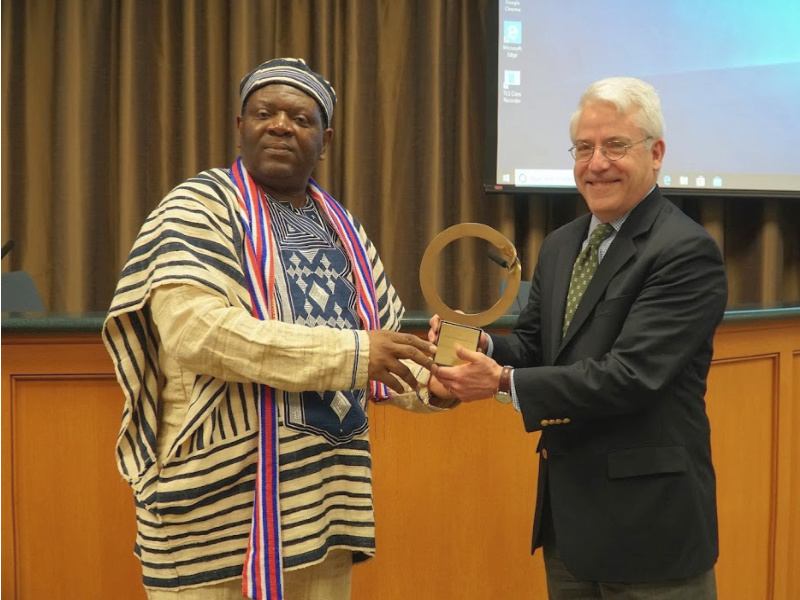 Alfred Brownell, left, with law Dean David Meyer during his visit to Tulane last spring. Brownell entrusted the Goldman Prize to Tulane Law, as an inspiration for future law students.

He left Liberia in 2016 under threat of arrest and death after he helped stop palm oil conglomerates from destroying hundreds of thousands of acres of tropical forest in his home country of Liberia.

For astounding work, Alfred Brownell (LLM ’02) has received awards and accolades, along with a safe place in academia to continue his work in exile. Yet, he remains fully committed to supporting environmental defenders around the world, especially those in his home country and West Africa, who are at risk as they fight to protect natural resources from harmful commercial endeavors and the implications of the Climate Crisis.

“There are millions of other environmental and human defenders who are not lucky and are not privileged like me,” Brownell wrote his Tulane Law colleagues recently, many of whom helped him in exile and amplified his work. “More importantly, these defenders do not have any form of network and in most cases are unknown, nameless, faceless, and working in very remote locations. They are the real heroes.”

Next week, Brownell, now a Visiting Professor at Yale Law School and an Associate Research Professor at Northeastern University School of Law, is spearheading a West African Human Rights Defender Conference (in a virtual format) March 29-31 to bring to light the issues facing those working in remote and indigenous communities to preserve lands from environmental harm.

Register for the conference here.

Sponsored by Schell Center for Human Rights at Yale University, the Tulane Center for Environmental Law, and several international organizations, the conference is titled Securing the firewall and connecting the unconnected: Frontline Defenders Across West Africa. The public may register to attend the conference.

Speaking emotionally about the conference and the report, Brownell said “the role of violations of rights, that is, the reluctance or lack of actions on the part of governments to protect frontline defenders, leaving them vulnerable and unprotected, is fueling not just extremism but inter-communal violence and is exacerbating the climate crisis across West Africa, especially in Northern Nigeria and the Sahel countries of Mali, Burkina Faso and Nigeria."

In order to respond to and reverse these threats, there is a need to accelerate the growing pressure on the global financial sector, he said, to remove human rights and environmental destruction from supply chains and to reform and transform the current development and business models.

“These models view peoples and nature as a commodity to be exploited which has resulted not only in the climate crisis but inequality, exclusion and the widening wealth gulf,” Brownell said.

The goal of the grassroots defenders’ conference is to understand the “enormous barriers and risks [activists] face in their work…. There is an urgent need to understand better who these frontline grassroots defenders are, what strategies they use to keep themselves safe, and where the gaps are — to connect the unconnected and establish a support and response mechanism for frontline grassroots environmental, land, and human rights defenders across West Africa," Brownell explained.

“Since I was exiled, my greatest desire has been to create visibility about these frontline environmental, land and human rights defenders and their work across West Africa protecting peoples and the planet,” Brownell said.

He has co-authored a report along with several West African human rights organizations on the issue, attempting to recommend policy platforms, community protection protocols, next steps funding strategy and secure communications platforms, among other issues for frontline advocates.

The goal is to turn the results of the conference and the report into a training toolkit for empowering frontline defenders to address their needs, security, communications and prevent reprisals. He hopes to involve Tulane students and faculty as partners in the project.

Brownell is widely recognized as one of the leading defenders of environmental and human rights in Africa. In 2019, he won the prestigious Goldman Environmental Prize for his work in saving Liberian forest at great peril.

In 2020, Brownell brought his Goldman Prize back to Tulane Law School as a Distinguished Practitioner in Residence in the Tulane Center for Environmental Law.  He also formally entrusted the Center to take custody of the Prize as an inspiration to future Tulane environmental law students in an address at the 25th Tulane Environmental Law and Policy Summit.

As a litigator, Brownell has served as lead counsel not only to Green Advocates, an organization he helped found, but also to its community partners, which together represent thousands of indigenous peoples in West Africa. He has championed the recognition of the customary land and property rights of local communities and indigenous groups against logging, the palm oil industry and big agro. He is currently the Tom & Andi Bernstein Visiting Human Rights Fellow at Yale Law School.