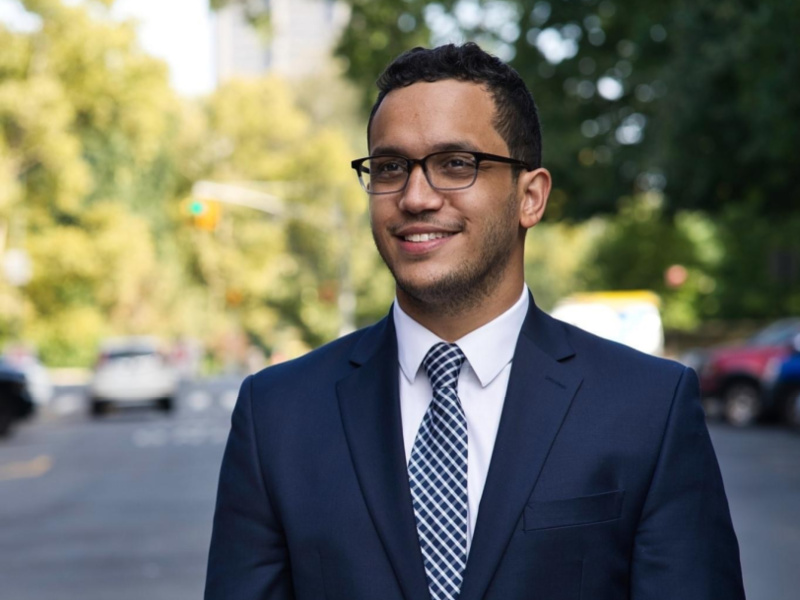 A recent Tulane Law alum has won the Democratic primary in New York City’s 7th district, defeating 11 other candidates, and marking a historic moment as the first Latino to represent the Upper Manhattan District on the City Council.

Shaun Abreu (L’18), who has been practicing as a tenants’ rights lawyer with the nonprofit New York Legal Assistance Group, easily took the seat with a whopping 63 percent of the vote, a 26-point margin from his closest opponent in a crowded 12-person race.

The district 7 seat on the City Council represents one of the most racially and socioeconomically diverse areas of New York, and includes such neighborhoods as West Harlem, Morningside Heights and parts of Washington Heights and the Upper West Side.

"I have never been prouder to call district 7 my home," Abreu tweeted last week as the city’s initial ranked-choice results were released. "I can't wait to get to work."

Abreu, 30, is heavily favored to win the general election as he faces just two third-party candidates.

“Shaun is an extraordinary person and a gifted lawyer, who from his first days in law school distinguished himself by his earnest passion for the fair treatment of the vulnerable,” said law Dean David Meyer. “He has always been a real leader among peers so it is no surprise that he would choose public service to make lasting impact on his community. We are immensely proud of Shaun and wish him much success.”

The son of Dominican parents -- his father was a union janitor at New York’s Port Authority and his mother a clerk at the famed Zabars grocery – Abreu grew up on 161st Street in the district he seeks to represent.

He ran an enthusiastic grass-roots campaign that attracted hundreds of volunteers and earned him the endorsement of more than 20 unions.

He focused his message on issues that mattered to him as a law student at Tulane, shaped by his experiences growing up in New York -- affordable housing, protecting worker’s rights, and expanding the right to legal counsel for people who need it the most. He routinely spoke on the campaign trail about his family’s struggles, including how they were evicted from their home when he was in elementary school and had to move in with neighbors.  His parents, Agnes and Juan, were regulars at his campaign events.

Against many odds, Abreu graduated from Columbia University and excelled later at Tulane Law School, where he was a student leader and passionate about the law. His intellectual curiosity, and his desire for fair treatment of the vulnerable and powerless, stood out with his teachers and mentors, including Prof. Joel Friedman, who taught him labor and employment law.

“I saw first-hand how unions had an impact on families,” Abreu said. “That class with Professor Friedman really opened my eyes – it connected for me how the law could work to protect our families and our union members,” said Abreu.

“It was always his dream to enter New York City politics. And now his journey has begun. But this is only the beginning, I am sure,” Friedman said. “He is a very confident, driven man who is destined for great success. I will be there when he is sworn in as Mayor one day!”

In law school, Abreu became managing editor of the Tulane Environmental Law Journal but that was just part of what taught him effective advocacy.

There was intersession Boot Camp, where he learned how to communicate not just with his clients, but the court and opposing counsel. And a course in negotiations with Prof. Gabe Feldman, who directs the law school’s Sports Law Program, taught him how to work towards fair agreements that allow his clients to stay in their homes.  And there was Prof. Stacy Seicshnaydre’s fair housing law class which connected how historically discriminatory policies created barriers in housing.

“Tulane – studying the law – gave teeth to my advocacy,” Abreu aid. “The internship I had with the NLRB (National Labor Relations Board), is one example. It came only because of the law school and with their support, which really opened my eyes to how the law could help me solve problems created by bad policies.”

Abreu made an impression on Law Dean Meyer, who has remained a mentor.

In a letter recommending Abreu for a law fellowship while a student at Tulane, Meyer wrote: “Shaun’s capacity for nuanced understanding how the law plays out on the ground, the importance of context and fact investigation, and the potential impact of economic and other influences, enables him to bring a strategic judgment to legal questions that one expects to see only from more seasoned lawyers.”

"Dean Meyer opened my eyes to how the law can be used to improve lives and how we can draft laws that achieve good public policy,” Abreu said.

As for things he will never forget about law school, he points to being “haunted” by handing in his 1L Brief, that most grueling rite of passage which he acknowledges “beautifully concluded that first year of law school,” and the compassion of his classmates.

“Tulane cultivates a student body where public service is in their DNA,” he said. “It’s something I always valued while I was there.”

“Always think of outcomes. What are the important outcomes you want to achieve, and how can the law get you there? The law is a means to an end; it is a tool that can help achieve good outcomes for those who need it and there is a lot you can do through public service.”