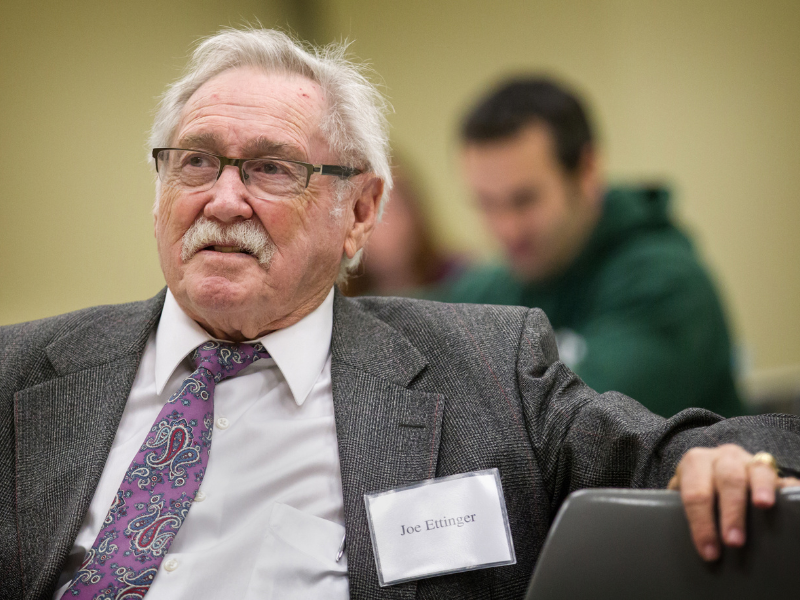 Joe Ettinger (L'56) was not only a distinguished litigator, but he was a founder and benefactor of the Tulane Intersession legal boot camp which has trained scores of new lawyers in its 11 years.

He was 91. Ettinger was laid to rest at the Green Acres Cemetery in Scottsdale, Arizona, his home in retirement.

Ettinger (L’56) had a successful (and colorful) criminal defense and civil rights law career for more than 50 years in Chicago and in 2012 became one of the founders of Tulane’s legal boot camps, an intensive week of legal simulations and skills training. In its 11th year, the program is one of the most popular at the law school.

“I worked with Joe at the very beginning of the criminal intersession program, and for four or five years thereafter,” said Professor Herb Larson (A&S '74), who directs Tulane Law’s international programs. “Two things about him stand out in my memory:  his energy, and his desire to help students.  I would frequently find him at the end of a very long day, still working with students, still trying to help them become better lawyers. His memory will unquestionably be a blessing to years of students yet to come.”

In 2018, one of the last times he attended Intersession in person, Ettinger arrived on the first day in a typical New Orleans downpour and jovially announced that he had passed on an offer to vacation on a warm Caribbean Island to serve as visiting faculty and, therefore, he was ready to start.

Professor Stacy Seicshnaydre (L’92) a long-time friend who worked with Ettinger for years as the Assistant Dean for Experiential Learning, reminded him that, “Well, Intersession doesn’t start until Joe Ettinger arrives.”

That was a fact, as Ettinger was one of the original founders of the program and a benefactor. As Intersession faculty learned of his passing, the messages of his mentorship and support – not just from students but from other members of faculty who taught alongside him – came pouring in.

“Intersession, and Joe, also brought us all together, for which I am so grateful,” wrote Laura Gasiorowski (L'94), a faculty member of the boot camps. “We became a little family, looking forward each year to a week together, with Joe at the head of the table, figuratively and literally...  I will always remember Joe in those moments, happy and surrounded by friends.”

“(Joe’s)  capacity for love is probably the only thing that exceeded his indefatigable, energy, enthusiasm and generosity,” wrote Jim Letten (L'79), Tulane Law’s former Dean of Experiential Learning and a regular member of the Intersession faculty.

Ettinger was a lawyer’s lawyer who was always ready to work. Even after retiring in 2016, he was appointed to public office as Commissioner for the Scottsdale, Arizona, Human Relations Commission for a three-year term. Until recently, he was a supervising attorney on a pro bono basis for the Arizona Justice Project of the Sandra Day O’Connor College of Law at Arizona State University.

As an unofficial ambassador for Tulane, he was an avid supporter of alumni causes at the law school, serving as a member of Tulane University’s Alumni Association Board of Directors. But it was the Intersession boot camp – which fulfilled Ettinger’s passion for the nitty-gritty of legal practice. Since its first offering in 2012, Ettinger has returned every year to Intersession, serving as visiting faculty in the criminal practice track. In the fall of that same year, he made his first generous gift to the program, so that it would continue for years to come.

“Joe’s passion and dedication to our students were instrumental in helping us launch the lawyering skills boot camp,” said law Dean David Meyer. “We all owe him a big debt.”

Ettinger believed strongly in the skills-training program and in preparing students for the profession. Not only did his financial support give the program legs to continue into its 11th year – even during a national pandemic – but his mentorship through the Joseph A. Ettinger Award in Criminal Law honored the top-performing students in the criminal law and civil litigation track since 2016. He would travel each year to confer the award himself.

“To me no matter where I was in my career, every experience I had I could attribute to what I learned at Tulane,” Ettinger said to colleagues in recent years. “This program lets students make a decision about whether this is for them or not, and then, if it is, figure out how to go about making that dream come true.”

Ettinger’s dedication to Tulane began while he was a student. He served as presiding judge of the Tulane Law School Moot Court Society in 1955-56, was a member of Sigma Alpha Mu, Phi Alpha Delta, and the King's Bench Society and served on the Law School Student Council.

Once he graduated in 1956, he attended the United States Army Law School and served as a U.S. Army Captain, later launching what would become a distinguished career as a criminal and civil rights attorney at first working for the city of Chicago.

In that time, he worked on cases that were as colorful as he was. He represented the city successfully against companies accused of violating air pollution ordinances and was involved in the trial of the Chicago Seven following riots during the 1968 Democratic national convention.

In another, more notorious case, he represented the city in a trial against three members of the American Nazi Party, who had violently protested the showing of a movie that starred Sammy Davis, Jr. His co-counsel at the time was the legendary Judge Willie Mae Whiting, a trailblazing Chicago lawyer who later in life rose through the ranks to become a Cook County Circuit Court judge. Whiting was the first Black woman to prosecute cases in the city courts, as well as the first Black woman Assistant U.S. Attorney in Northern Illinois.

“Your office and particularly Joseph E. Ettinger have acted in the best tradition of American government in the trial and conviction of American Nazis,” wrote the members of Chicago’s Jewish War Veterans in a letter to the city. “We were impressed by the actions of your office, and the zeal and devotion to duty.”

His work was typical of Chicago at the time. He represented the city in violations of ordinances ranging from illegal gambling to wild parties involving liquor and minors. He once skillfully negotiated a case involving two brawling unions, who, in fact, had publicly brawled outside a committee meeting. Both sides sought criminal prosecutions of the other but Ettinger intervened, and the day’s papers reported that ultimately, “the two sides had decided not to press cross-complaints.”

Ettinger left the city to go into private practice until he accepted a position as associate professor of law at the Illinois Institute of Technology's Kent College of Law, a position he held until 1976. Later, he would become Chairman of the Zoning Board of Appeals for Olympia Fields, Illinois. He continued to work mostly in private practice until 1997 when he served as special state appellate defender for the State of Illinois.

His work was true to his passion for criminal law: He represented those accused of committing a myriad of crimes, like defrauding insurers, and one notable case of bank robbery. He did death penalty and post-conviction work, too, including representing a client whose nickname was “Al Capone.”

At Tulane, Ettinger was remembered as the best of mentors.

“A great friend and a fearsome lawyer, Joe Ettinger was the patriarch of our intersession family,” said Doug Nadjari (A&S '80, L'83), a longtime friend and partner at Ruskin, Moscou & Faltischek. “Despite a long career, Joe was the youngest octogenarian I know because he was always diving into something new. He was never satisfied with the status quo; he saw a need for our program and stepped up in every way. He created this program, he endowed it and taught until the end. Joe is an inspiration to all of us but for those of us who are no longer ‘new lawyers’ Joe’s lesson is that there is always something new to learn and love about the law.”

He was so dedicated to the school that in the spring of 2020, as Tulane transitioned to online teaching and the law school planned a virtual graduation because of the COVID-19 pandemic, Ettinger went off to buy a laptop and learned how to operate Zoom so that he could deliver the Ettinger Award himself, despite being ill at the time.

“While many were hunkering down in some measure of isolation and he easily could have done so, he was going to find a way to be with his Tulane family on that occasion, just as he’d always flown back to New Orleans for that ceremony,” said Treb Winegar, the Director of Development for the law school.

One of the students he mentored during the one of the boot camps was Robert Waldrup (L’16), who in his graduation year, joined his classmate Gary Crosby to start the Waldrup-Crosby Scholarship, to enable more students of color with financial barriers to attend law school.  Waldrup, in nominating Ettinger to the Tulane Hall of Fame in recent years, noted, “his philanthropy inspired my own and continues to be an example of what it means to be an alumnus.”

“I would not have had the same Tulane experience but for the Intersession, nor would I have the sense of responsibility that comes with the title ‘alumnus’ without Joe’s friendship and mentorship,” wrote Waldrup. “Joe is the quintessential ‘Tulane Man.’  If I am one, it is only because Joe showed me the way.”

Fittingly, Waldrup was the first criminal law recipient of the Joe Ettinger Award in 2016. Today, fresh off his career as an Air Force prosecutor, he is in practice at Barrasso, Usdin, Kupperman, Freeman & Sarver where his practice focuses on complex criminal and civil matters.

Through Waldrup, and former students like him, Ettinger’s work has come full circle.