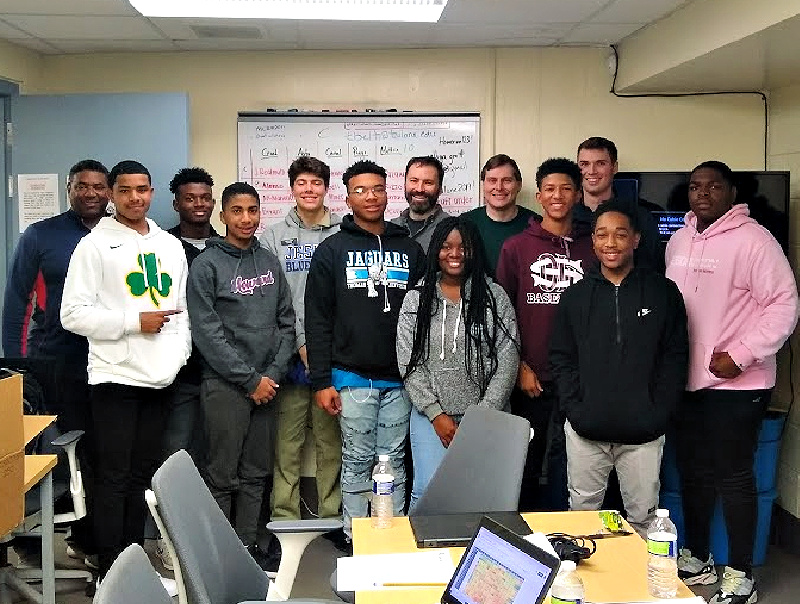 MLB Urban Youth Academy students in years past have taken classes at Tulane on sports law, exploring everything from salary arbitration to litigation (pictured). This year, the program went virtual, giving the chance to expand courses to kids from Compton, Calif.

They are kids from urban centers, many living in underserved communities, whose sights are set on the world of sports as a key to success.

Yet only 1 percent of aspiring high school and college athletes will ever make it to the pros – which is why the partnership between the Tulane Sports Law Program and MLBs Urban Youth Academy is so important. In addition to on-field baseball and softball training, students are exposed to the myriad of possible professional careers off the field. Academy kids learn about the many professional jobs that fuel the sports industry, including the law, front-end administration and more.

Now under the umbrella of the Tulane Center for Sport, the partnership this year – in a virtual format due to the COVID-19 pandemic – expanded to teaching its annual sports law courses to students in New Orleans and Compton, Calif.

"This expanded partnership with Major League Baseball allows the Tulane Center for Sport to provide an interdisciplinary education to thousands of high school students at youth academies across the country on the legal, financial, business, and medical aspects of baseball," said Prof. Gabe Feldman, Co-Founder of Tulane Center for Sport and the Director of the Sports Law Program. "Our goal is to equip these students with the broad-based knowledge needed to help them identify and pursue possible career opportunities in baseball and other industries.”

Feldman for years has pushed the idea that sports is a vehicle for social change and development, not just economics and entertainment.

"One of the pillars of the Tulane Center for Sport and the Tulane Sports Law Program is to help use sport to improve the world—not only through the health benefits of athletic participation, but also through the unifying, inspirational, and educational power and influence of sports and athletes,” he said.

Through Tulane’s partnership, the Academy students received a crash course in a broad range of sports law topics, including MLB rules, competitive balance, sports lawsuits, arbitration, and player agency. This year, they also were able to work on analytics with help from the mathematics department.  Although virtual, the courses incorporated live activities to illustrate the concepts, including analysis of a mock tort suit and developing an argument for a mock negotiation.

“From an early age, Coach Eddie and his staff at the Urban Youth Academy have provided me with a training environment to develop my skills as a baseball player and I am grateful for the friendships and memories I have made,” Burns said recently “I also had the opportunity to take the Tulane sports law class that was offered at UYA which was an awesome experience and helped me better understand and appreciate the business side of baseball.”

The MLB’s Youth Academy program has locations in Cincinnati, Compton, Houston, Kansas City, New Orleans, Philadelphia, Texas, and Washington, and “aims to set the standard for baseball and softball instruction, teach and educate in urban America, and enhance the quality of life in the surrounding communities.”

The partnership between Tulane and the Academy goes back to 2015, when Feldman and Academy Director Davis created the initial pilot. It was designed to serve as a benchmark for future versions of the program across the country. The ultimate goal has been to introduce high school kids to the possibilities of internships and jobs with Major League Baseball and its teams.

For his efforts in fostering this partnership, Feldman in 2017 was awarded the Youth Leadership Council’s Role Model Award.