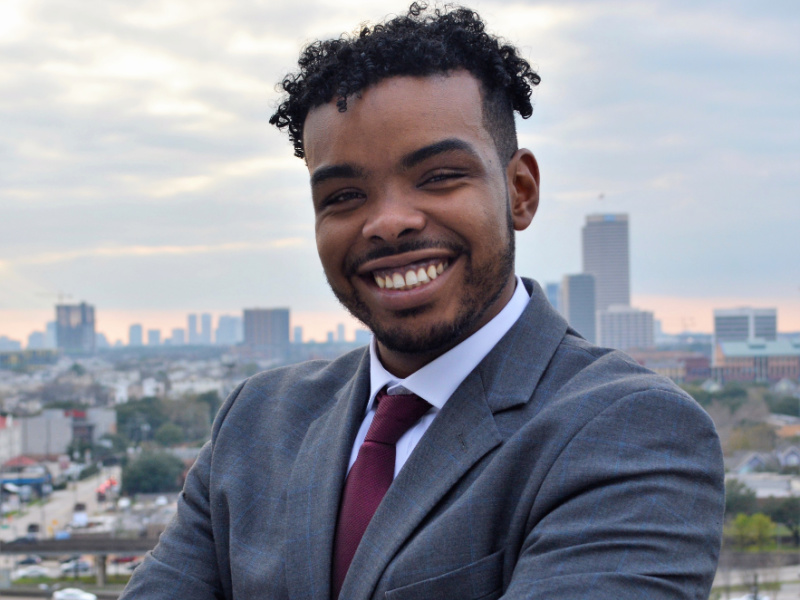 Antonio Milton, in his second-year of law school, has made history. He becomes the first Black editor-in-chief of the Tulane Law Review.

A grueling first year at Tulane Law School did not deter Antonio Milton from a new challenge, writing his way onto its oldest and most prestigious legal journal.

This week, he reached the proverbial moon by making history: He became the first Black editor-in-chief of the Tulane Law Review.

He describes the moment he told his family:

“There was much excited yelling and happiness. And then it was trying to call my siblings on various apps. It was a very happy moment. We were able to have this great family Zoom session and celebrated together.”

The Law Review, now in its 105th year, is among the most respected of legal journals in the nation. It is fully student-run and edited; the selection process to join is highly competitive, the writing extensive. Members generally rank academically at the top of their law class.

“The first year was very difficult but I knew that I wanted to be in law school to make changes, trailblaze,” said Milton. “To be on Law Review, it’s my hope, that I can build a bridge for those who come after me and inspire those future attorneys of color.”

Milton is one of the few Black law students across the country who have broken barriers to take the top leadership spot in the revered legal journals of major law schools.

Just this week, the University of Virginia School of Law and Fordham University named their first Black law journal editor-in-chief; both are women. By comparison, in 1990 Harvard Law announced its first, a young man from Illinois named Barack Obama.

“I looked at the names of other Black Review members (at Tulane) and they often are the changemakers – they’re politicians, trailblazers, judges,” said Milton, and in a nod to those before him, “amazing mentors like Janice Foster (L’70), and Wayne Lee (L’74). They are an inspiration.”

“Antonio is following in the footsteps of many great Tulane pioneers before him and he will provide his own inspiration to many more exceptionally talented students who follow,” said Dean David Meyer. “This is a very significant milestone and we couldn’t be prouder of his accomplishment.”

Milton acknowledges he is lucky; his father is a litigator. Most students of color arrive in law school without that background or example in the legal profession.

“My father is my inspiration for sure,” he said.

From the time he arrived on campus as a freshman, he was ready to tackle the world. He joined a number of organizations including the university’s Black Student Union and worked in the Undergraduate Admission’s Office.

Once he arrived at Tulane Law, he shined. He was one of six first-year law students chosen for the 1L Leadership Council on Legal Diversity Scholars Program, a respected initiative that expands career opportunities for diverse first-year law students. Through the program, he interned at Bracewell LLP in Houston, Texas last summer.

He joined the Black Law Student Association and as a 2L was selected to be a Harris Fellow, a program through which upper-class law students mentor first-year law students. He is also part of the Moot Court Program.

His goal leading the Law Review is to inspire other students of color so that they may be inclined to work on the law school’s legal journals – or at least make the most of the law school experience, whatever that may be for them.

After graduation, Milton will clerk for the Hon. Judge Nannette Jolivette Brown (L’88) of the Eastern District of Louisiana. He is hoping to secure an appellate federal clerkship after that as well. He is interested in several areas of law, including commercial and civil litigation.