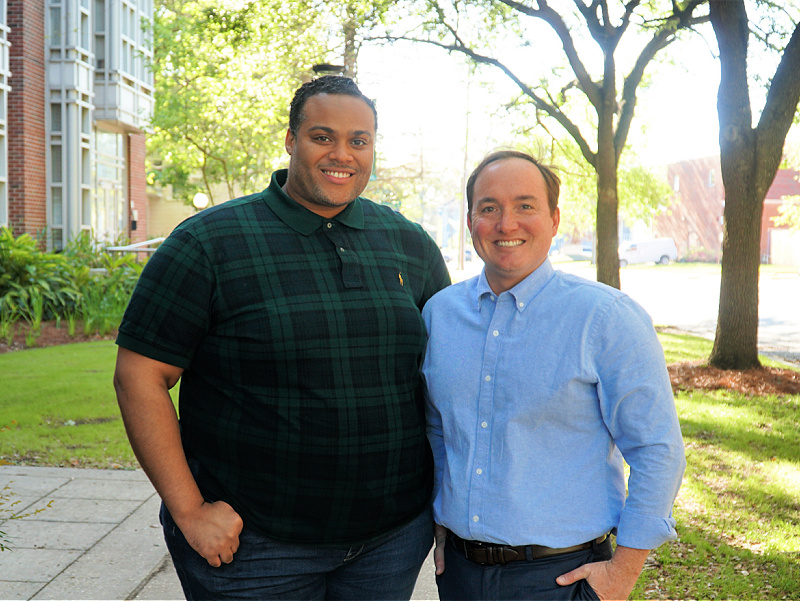 (L-R) Michelle Domingue and Peter Vesich are the finalists who will compete in the Moot Court Honorary Round on April 6. (Photo: Alina Hernandez)

The annual – and much anticipated – Tulane Moot Court Honorary Round takes place Wednesday, April 6, at Tulane Law School before a distinguished panel of judges.

This year’s competitors are seasoned Moot Court veterans Michelle Domingue and Peter Vesich, both third-year law students. They will argue a case involving the free speech rights of undocumented immigrants in the fictitious case of El v. Luthor starting at 5 p.m. in the Wendell H. Gauthier Moot Court Room 110.

This year’s judicial panel is made up of Justice Piper Griffin of the Louisiana Supreme Court; Judge Roland Belsome (L ’84) of Louisiana’s 4th Circuit Court of Appeal; and Judge Karen Herman (L ’94) of the Orleans Parish Criminal District Court.

Domingue and Vesich are competing in what is known as the “champion of champions” competition, the key Moot Court competition that determines whose names will go first “on the marble” – stone slabs in the Wendell H. Gauthier Moot Court room which are inscribed with the names of generations of competitors since the 1930s.

It’s part of the more than 80-year-old Moot Court tradition at Tulane Law which has seen a surge in recent years with funding and active support from generous alumni, notably Evan Trestman (L ’77). In recent years, alumni and partners with the New Orleans law firm Herman, Herman & Katz enhanced the program with an endowment of the Harry Herman Moot Court Excellence Fund to be used for Moot Court programming and the trial and appellate advocacy program.

Domingue is originally from Plaquemine, La., and has served as Vice President of the Black Law Students Association, Administrative Justice for Academic Affairs and Alumni Relations of the Tulane Moot Court Program, and a Dean Rufus Harris Peer Fellow for first-year law students.

Most recently, the team he worked with won the National Thurgood Marshall Moot Court Competition – making him the coach of the national champs.

Before coming to law school, Domingue served as a high school math teacher for seven years at public schools in Iberville and Orleans Parishes. He holds an undergraduate degree with honors in African and African American Studies and Psychology from Dartmouth College in Hanover, N.H., and a master’s degree in liberal studies from Tulane University.

After graduation, Domingue will serve as a judicial law clerk to the U.S. District Judge Dee D. Drell of the Western District of Louisiana for the 2022-2023 term. Following this clerkship, he will begin work as a Litigation Associate with Hunton Andrews Kurth LLP in Houston.

Vesich is also from Louisiana, specifically from “down the bayou” in Thibodaux. He earned his undergraduate degree from Nicholls State University while majoring in Government with a concentration in International Studies. As a 2L, Vesich practiced for and then competed in the Judge John R. Brown Admiralty Moot Court Competition. Under the diligent tutelage of last year’s intraschool champion, Lucy Dieckhaus, he became an effective oral and written advocate.

Prior to law school, Vesich served in the U.S. Marine Corps for six years, first as a signals intelligence operator, and later with the Marine Corps Embassy Security Group, where he did tours in Erbil, Iraq; Lisbon, Portugal; and Chengdu, China.