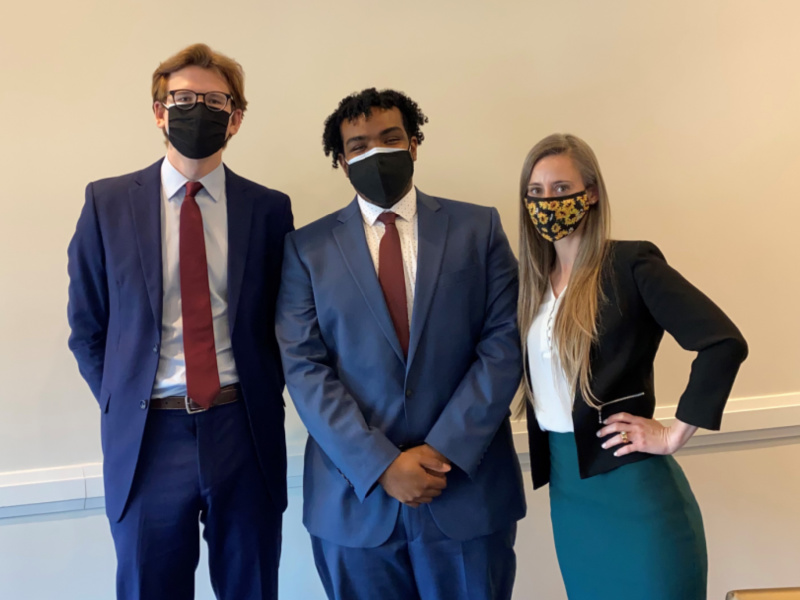 Tulane’s team made it to the semi-final round, placing in the top nine of a 52-team competition. The team was comprised of second-years Brennan Spoor and Antonio Milton, and third-year law student Julie Schwartzwald Meaders, as well as team coach Katie Ricks, also a 3L.

In addition to top placement, the team received a few other honors. The team won Best Brief for the Intervenor and Antonio Milton was named Best Oralist in one of the preliminary rounds with his exceptional rebuttal arguments.

Ricks deftly worked to coach the team remotely and between rounds of the competition.  Schwartzwald Meaders, who competed in the same event last year, was instrumental in preparing the group for the structure of the competition in this new, virtual format. She was a key player in writing and editing the team brief that won an award, and her arguments in two preliminary rounds propelled the team’s win.

Spoor and Milton skillfully argued the quarter and semi-final rounds, with Milton delivering dynamic rebuttals and Spoor fielding a barrage of questions without missing a beat.

Preparation for these competitions always involves lots of support. Faculty, alumni and others helped the team prepare, including law Professors Adam Babich, Lisa Jordan, Lauren Godshall, and Mark Davis; and Moot Court alums (all Class of 2020) Chiara Kalogjera-Sackellares, Simon Willis, and Will Harrison.  Their tough questions and knowledge of the Clean Air Act helped the team sharpen legal arguments and improve delivery via Zoom.