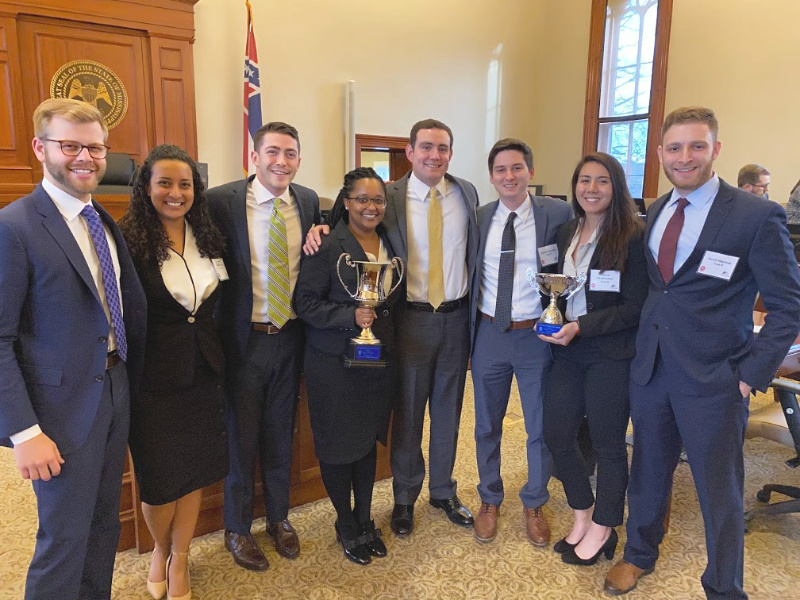 If winning once is nice, then it’s even better twice.

That's the kind of Valentine’s Day weekend the Tulane Law Mock Trial Team had. With two teams at the annual Southern Classic Mock Trial Competition in Oxford, Miss., they got a most unsual result: The teams took first and second place, which means the final round was a Tulane Takeover.

Teams in competitions are identified with numbers, rather than by school name, to avoid favorites among judges. It surprised even the event’s planners that the final round of competition was among two teams from the same school.

“It was amazing to see the two teams go head to head in the final round of the competition,” said Chelsey Whynot (L’20), who is the head coach for trial competitions. “I was a little nervous about our team dynamic and morale, but right before the round, I watched as the teams approached each other to begin the trial and instead of shaking hands as is customary, they all hugged and wished each other luck. I think that really speaks to the camaraderie and friendship that these competitors have developed, in addition to their exceptional trial skills."

This is the second consecutive win this spring for the Trial Team, with one more competition next month.

“The incredible progress that these competitors made from the beginning of their preparation for this competition to that final round is something they should all be very proud of. I certainly am,” said Whynot.

Whynot and Sterbcow, both third-year-law students and Moot Court veterans, had the distinction at the tournament of being both coaches and students, since many law school teams have practitioners or professors serve as coaches.

“They received a lot of praise from other coaches and the practitioners present at the event,” said Siew. “They have both dedicated so much time to our team, and without their incredible dedication and leadership, our successes this weekend could NOT have been possible!”

This most recent win seems to sum up a trifecta “season” for Tulane’s Moot Court program, which has won three competitions in recent weeks.

Second-year law students Hannah Holmes and Trinidad Reyes competed in the ABA Mediation Competition in San Antonio, Texas, winning third place after competing as both attorneys and clients. And, second-year law students Brooke Alexander and Hannah Harris competed in the ABA Negotiation Competition in Chicago, Ill., ranking 5th among 20 teams from across the nation. They were regional finalists and national quarterfinalists.

“The moot court program gives our students a unique opportunity to learn and practice oral advocacy skills in a supportive and fun environment, said Moot Court Chief Justice Hannah Lafrance. “This has been an incredible year for our teams, and we are very proud of them.”

While Moot Court is iconic at Tulane, with multiple competitions throughout the year, the law school has in recent years revitalized the program with generous gifts from alumni to help encourage greater student participation while learning effective trial and advocacy skills.