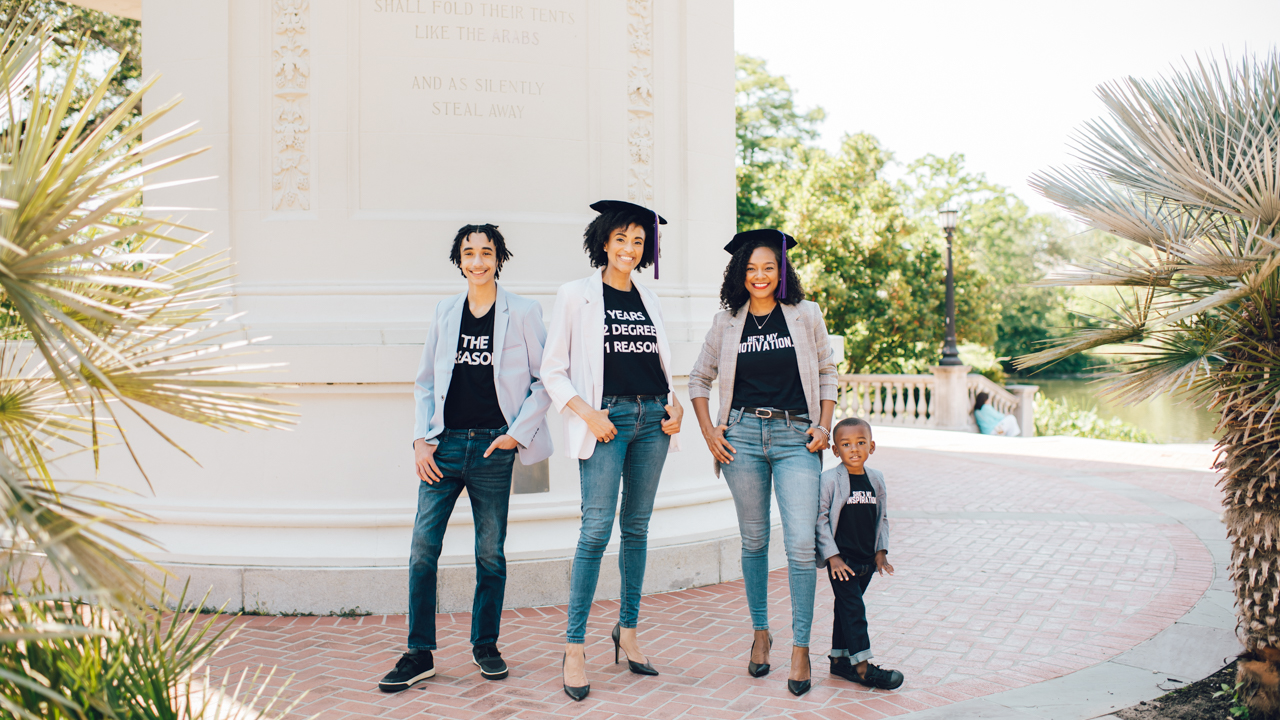 Tulane Class of 2021 graduates Andrea Ewalefo and her son, Elijah, and AsheLee Singleton, with her toddler, Marquez, whom everyone calls "Junior." The mothers' friendship and a long list of friends and supporters helped them balance three years of law school and mothering. "This journey represents so much more than the degree itself,” said Singleton. (Photo credit: VCB Photography)

Maybe it was one of their first encounters during 1L orientation week that sealed their friendship.

No matter when they became friends, Andrea Ewalefo and AsheLee Singleton – classmates, regular study partners, and soon-to be Tulane Law graduates – unequivocally know that a bond was formed the moment they realized they were both moms.

“I remember meeting Andrea and realizing she had a son, and I knew right then that she got it,” said Singleton, mother of Marquez (who goes by “Junior”), now 3. “Of anyone in our class who could understand, she was the one.”

“What she has done is amazing,” said Ewalefo, who is the mom of 14-year-old Elijah. “Who takes the LSAT eight months pregnant and then starts law school with a 10-month-old, while commuting across state lines every day? Are you kidding me? But AsheLee did that. She is so inspiring.”

If law school is hard for the average student, it is doubly difficult for anyone who is a parent. Yet, somehow, single-mom Ewalefo and brand-new mom Singleton, took the leap into their first year of law school (the year that can only be described as drinking from a firehose) hopeful their support system would hold up.

“Being a law student is hard. Being a mother is hard. Doing both at the same time and during a pandemic is heroic,” said law Dean of Students Abigail Gaunt. “For all of the additional challenges they faced, I suspect balancing their role as mothers with their role as law students was key in helping them thrive during their time here. Andrea and AsheLee had the advantage of built-in reminders of their reasons for doing this and that there are things more important than law school.”

“I had to consider that Elijah was going to be starting high school by the time I was finishing law school,” said Ewalefo. “So, I needed to be somewhere where I could stay for a while.”

And that she did. Ewalefo bought a home near Tulane and Lusher Charter School, where Elijah is a freshman. They can bike everywhere.

And at Tulane Law, “I knew already coming in that I would be one of the oldest students in law school and would have quite a learning curve adjusting to being a student again,” said Ewalefo, who is receiving a JD/MBA in three years, a dual degree that normally takes four years.

It was very important that her institution understood she was a package deal, too.

“No one gave me ‘the look’ when he came in the building and studied with us, or was with me at an event,” Ewalefo said, recalling a particularly busy day when Elijah was waiting for her in the hallway and Prof. Amy Gajda encouraged him to sit in for a while in her undergraduate privacy law class.

“He asked a question at the end and Professor Gajda just thought it was so great!” said his mother, clearly beaming with pride.

From professors to fellow students and friends, administration, staff, and even the TapRide drivers, Ewalefo is grateful for everyone who supported her and Elijah along the way.

"There are too many people to whom I owe everything. Dean Timmons made sure I had all my grad requirements for both schools; Mr. Lionel, Mr. Mike, and Mr. Kevin (from TapRide) made sure I always got home safe; my friends knew exactly when to step in when I was overwhelmed and were the best aunties and uncles to Elijah."

While Ewalefo had to manage the needs of a preteen, Singleton had a brand-new baby. She had to commute into New Orleans every day from Bay St. Louis, Miss., and figure out how she could continue to breast feed and give her son the time he needed with the help of her husband and her in-laws, who live nearby.

And that is when her tears flowed freely.

“When I look back at my support system, and all that I have been able to do, it’s really a credit to them,” she said. “My husband, my in-laws, my family, my law school family – I have no words,” she said. “My BLSA (Black Law Student Association) family who made me feel so supported. I feel so very blessed.”

It was her father-in-law, then-retired, who took care of Junior while she was at school. And during intense times – like exams – other family members would step in.

Her law school family was huge, too. She points to people who made her feel like she belonged in law school: Prof. Tonya Jupiter, whom she met during Admitted Student Day. Jupiter, Tulane’s Director of Advocacy and Pro Bono Programs and a 1994 Tulane Law alum, was a first-generation lawyer, and is a mother herself.

Then there is alumna Tanisha Manning (L’20), who met Singleton and told her she would love to be a source of support.

“On our ride home that day, my husband and I talked about it and knew we made the right decision,” said Singl 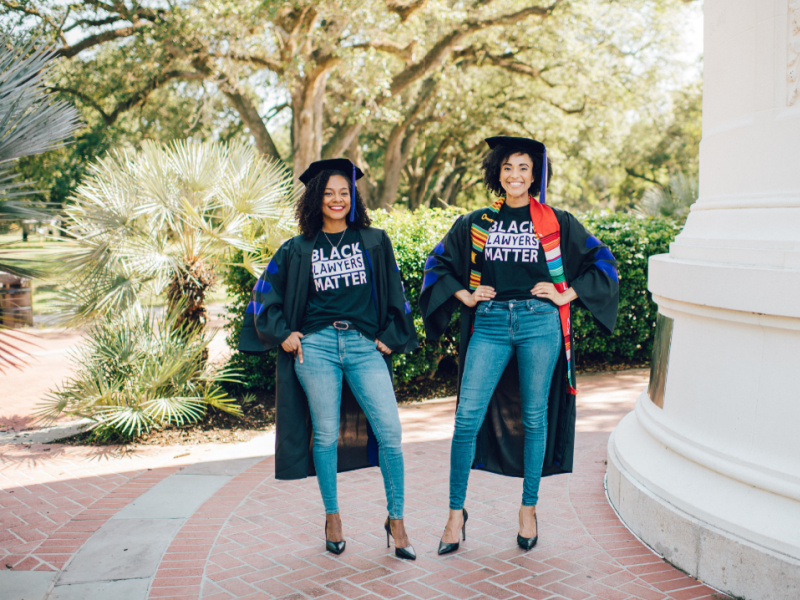 Despite juggling being law students and mothers, both women managed to be incredibly active.

Singleton was a member of BLSA and a member of Tulane Law Moot Court’s ADR team under the BLSA discipline, winning “Best Negotiator” and “Third Place Overall” with her teammate in the Nelson Mandela International Negotiation Competition. She was also awarded First Place in the 2L Intraschool ADR competition, served on the Dean Advisory Board, and served as 3L Class Secretary. In her last year, she was a student attorney in the Civil Rights and Federal Practice Clinic and had the opportunity to argue on behalf of her client at the United States Court of Appeals for the Fifth Circuit.

In addition to pursuing a JD/MBA in a mindboggling three years, Ewafelo was a member of BLSA and Tulane Law Moot Court’s ADR and Appellate Moot Court teams under the BLSA discipline, serving as both a competitor and coach for Appellate Moot Court. She also served as SBA 1L Class President and Civil Law Rep, a TULAP law clerk, Federal Bar Association Vice President, and on the Career Development Office Advisory Committee. In the business school, Ewalefo helped revive the Tulane Black Business Student Association, serving as Vice President and then President.

She also competed in a case competition at The Ohio State University and won "Best Presenter" and participated in Freeman Consulting Group as a student consultant to two local start-ups, winning "Team to Deliver the Most Value."

At Tulane's Unified Commencement, Ewafelo was honored to be selected as one of the student speakers.

Understanding the value of accountability, both women have been meeting every Thursday via Zoom for the past year to prep for the bar exam.

“Even if we’re just sitting together in a Zoom meeting, it’s accountability to one another, it’s focusing on ourselves for that time,” said Ewalefo.

For Singleton, her commute gave her time to listen to law courses online, everything from civil procedure to bar exam prep. She got up early, worked between classes – but followed one unbreakable rule.

“I wanted to be home by bedtime for Junior. I didn’t want to miss bedtime,” she recalled.

Ewalefo thinks her road was easier in some ways. Her son, Elijah, is mature for his age and surprisingly self-sufficient. He bikes to school, takes the initiative with homework and when he studies, it’s often not far from his mom in one of the law school rooms. “We are definitely a team,” said Ewalefo.

“I tell people this all the time when they ask how I do it: Most of my adult life he has been on this journey with me. So, I don’t know anything else.”

The day they’re scheduled to do a photo shoot in Audubon Park, the foursome – having arrived together -- reflect both chaos and a lot of love.

Junior is holding on to his mother’s leg, as she tries to adjust her graduation tam. Elijah is holding up his mom’s cellphone as a mirror so she can apply some lip gloss.

There are shoes near a tree, a car full of clothes, a tiny boy’s coat jacket sits next to graduation regalia waiting to be worn.

“We got this,” Singleton says with a chuckle to Ewalefo, a nod to her surprise that they will get through this in-the-middle-of-Junior’s-naptime shoot and graduation.

They pose. They laugh. They fix how the JD tassels fall off each other’s tams. The boys patiently smile for the photos, even tiny Junior.

The two own their own fledgling businesses outside of law school. Ewalefo is launching a financial literacy business focused on women and minorities (@modernladyvibes on Instagram and YouTube).  Singleton launched a Black-woman empowerment line of clothing and accessories through her online store, My Black Mommy Magic (@myblackmommymagic on Instagram).

“This journey represents so much more than the degree itself,” said Singleton. “Many times, we have had to find creative paths to the same destination. It definitely shows you what you are capable of, even if it is sometimes humbling.”