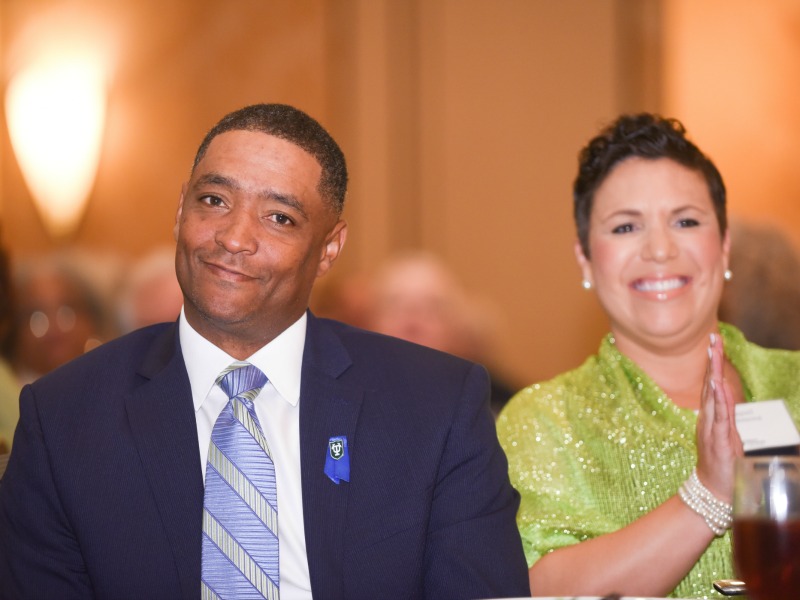 U.S. Rep. Cedric Richmond (flanked by his wife, Raquel, to the right) was inducted in May into the Tulane Law School Hall of Fame. He joins the Joe Biden campaign as its first national co-chair. (Photo Credit: Tracie Morris Schaefer)

Tulane Law alumnus U.S. Rep. Cedric Richmond has been tapped to be the first national co-chairman of the Joe Biden campaign.

With the appointment, Richmond (L’98) gains a major leadership role in the former vice president’s 2020 presidential run, a move that The New York Times said “could bolster Mr. Biden’s standing with some congressional Democrats and African-American leaders in politically important states.” Richmond, a Democrat from New Orleans, is the former chairman of the Congressional Black Caucus.

Richmond’s five terms in Congress – and the political contacts he’s made – have made him a valuable asset to the campaign, which he acknowledged in recent interviews.

Read his Q&A with The New York Times.

“My biggest strength is offering political advice and using my political instincts to come up with strategy, and not just strategy in the African-American community. I think the real strength is in the South and other parts of the country,” Richmond told the Times.

Richmond is New Orleans through and through. He represents the second congressional district, which encompasses much of New Orleans and runs across nine parishes to Baton Rouge. He was first elected  to the Louisiana House of Representatives in 2000, just two years out of law school, becoming one of the youngest members. He is a graduate of Benjamin Franklin High School, earned his undergraduate degree from Morehouse College in Atlanta, and his Juris Doctor from Tulane Law. He also is a graduate of Harvard University's  Executive Education Program at the John F. Kennedy School of Government.

A dedicated Tulanian, he was the graduation speaker at the law school’s 2017 commencement, where he quoted Chinese philosopher Confucious, statesman Daniel Webster and legendary baseball slugger Hank Aaron. He told graduates then that they should strive in their professional lives to make sure “justice and equality are more than just words on a page.” In a recent Facebook post, he gave a salute to his alma mater and repeated that mantra - that justice and equality need action.

In May, he was inducted into the law school Hall of Fame, an honor bestowed on alumni and faculty who have distinguished professional achievements and an enduring dedication to the mission and students of Tulane Law School.

Richmond has also established himself as a go-to House member when it comes to baseball. He is a rising star in the annual Congressional Baseball Game where his hitting stats  prompted The New York Times to call him “the Babe Ruth of the Congressional Baseball Game.” The game is a long-running annual charity event where the competition is intense but less rancorous than in the political sphere. Richmond played baseball at Morehouse College, and Democrats have seen much success with him on the mound since 2015.