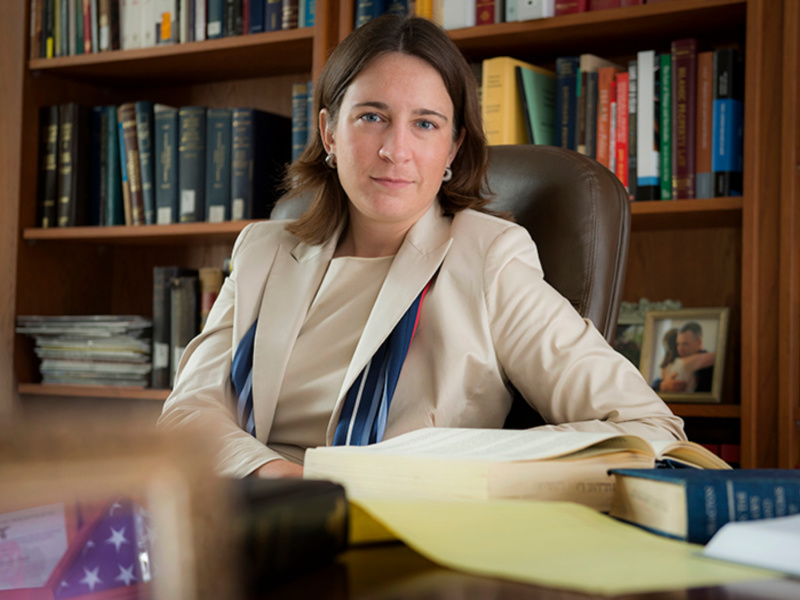 Tulane Law Vice Dean Sally Richardson, an international scholar of property rights, has been elected by her peers to join the American Law Institute, the nation’s most influential legal reform organization

Richardson is one of 22 new members elected this month to ALI, an independent organization composed of distinguished scholars, judges, and practicing lawyers and which produces scholarly work, including influential legal work that clarifies, modernizes and otherwise improves the law.

“Sally will be an enormous asset to the ALI and her election is very well-deserved recognition of her national leadership in her field,” said Law Dean David Meyer.

Richardson has been a major contributor to law reform in numerous contexts through the years, including serving on the Council of the Louisiana Law Institute and as a reporter for its revision of Louisiana’s property law and a member of a dozen more Institute committees addressing a wide range of revisions to the Louisiana Code.

She also serves as a reporter for a property-law study committee the Uniform Law Commission and as an elected officer and national leader in the American Academy of Comparative Law and the Association of Law, Property and Society.

The ALI is a cornerstone organization in the American legal system. “ALI drafts, discusses, revises, and publishes Restatements of the Law, Model Codes, and Principles of Law that are enormously influential in the courts and legislatures, as well as in legal scholarship and education,” according to its website.

Members can influence the development of law in both existing areas of legal work and those that are emerging. They are able to work with other eminent lawyers, judges, academics and contribute to the public good.  Richardson joins five other Tulane colleagues as elected ALI members, including Tulane President Mike Fitts, Dean David Meyer, and Professors Ronald Scalise, Joel Friedman, and Cynthia Samuel.

In 2020, Richardson was named Vice Dean for Academic Affairs at Tulane Law, a position where she has distinguished herself as a highly capable administrator who helped lead the school through changes in the delivery of teaching law during the national COVID-19 pandemic.

Richardson, the A.D. Freeman Professor of Civil Law, is a distinguished scholar of comparative property law, studying the interactions and influences of both community and common-law property systems.  She is the author of two major case books in the field, as well as multiple scholarly articles scrutinizing the modern efficacy of ancient property law doctrines ranging from easements to adverse possession.  Her article "Reframing Ameliorative Waste," published in the American Journal of Comparative Law, was selected for the highly prestigious Yale/Stanford/Harvard Junior Faculty Forum in 2015.

All the while, Richardson is one of the most beloved professors among students. In 2019, she received Tulane University’s highest teaching honor – the President’s Award for Excellence in Professional and Graduate Teaching.  Four years earlier, the graduating class had selected her to receive the law school’s top teaching award, the Felix Frankfurter Award for Distinguished Teaching.

Richardson serves on the executive board for both the Association of Law, Property and Society and the American Society of Comparative Law’s Younger Comparativist Committee. She is a member of Federal Bar Association New Orleans Chapter board of directors. She also is an active member of the Louisiana State Law Institute, serving on its council and a number of committees, including the Water Law Committee, Persons-Marriage Committee and Tax Sales Committee.