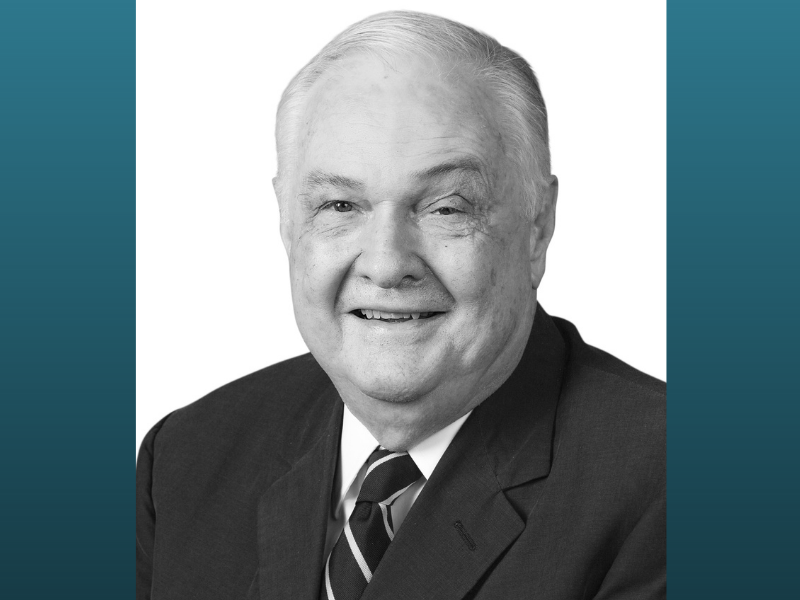 Robert Acomb Jr.,  a visionary lawyer who helped establish Tulane as a global center for maritime law and whose illustrious career saw him recognized as one of the top admiralty lawyers in the world, has died.

Acomb (B’51, L’53) was a long-time partner at the Jones Walker firm in New Orleans, where he specialized in maritime litigation and was considered a giant in both the practice and scholarship in admiralty law. He not only wrote two casebooks on admiralty, but he also chaired two American Bar Association committees on maritime law in the early 80s and was a crucial leader in the founding of Tulane’s Admiralty Law Institute in 1965, remaining Chair Emeritus until his death.

“There was no more dedicated Tulanian and his legacy of service and leadership can be seen in so much of what is best about Tulane Law School today,” said Law Dean David Meyer.  “He was an essential leader in making Tulane the world’s leader in admiralty law and helped lay the foundation for an enduring and uniquely valuable partnership between the field’s leading scholars and practitioners in educating generations of top admiralty lawyers.”

Acomb was a Tulane undergraduate in business and received his law degree from Tulane Law School, where he graduated Order of the Coif and was an editor of the Tulane Law Review.

He remained throughout his life a dedicated Tulanian, playing a central role within the university and in advancing the law school on multiple fronts.  He was inducted into the Tulane Law Hall of Fame in 2014.

In the early 60s, during the tenure of the late Dean Cecil Morgan, Acomb agreed to work with Tulane faculty and the local maritime law community to bring a “high-grade” maritime law event to the campus, said Prof. Robert Force, who, as Director Emeritus of the Maritime Law Center, knew Acomb well.  The event, Force said, brought papers presented at Tulane that had to pass the strict academic legal standards of the Law Review, where they were to be published.

The three-day Admiralty Law Institute today convenes hundreds of lawyers every other year in the spring, the largest continuing legal education program devoted to maritime law. Many of the papers presented at the Institute today are still published in the Tulane Law Review, with recent events typically attended by more than 300 lawyers, shipping and marine insurance industry representatives and academics from more than 30 states and 11 countries.

Acomb’s fierce dedication to the law school didn’t end there. He was an adjunct professor of law from 1969 until his death, served for decades on the Law School Dean’s Advisory Board and was a driving force on a host of successful efforts to raise funds to endow the Tulane Maritime Law Center (where he served as chairman for years), build the law school’s current home, Weinmann Hall, and advance the civil law program at Tulane. He was chair of the Advisory Editors of the Tulane Maritime Law Journal until his death.

Acomb also made time to serve outside the legal circles of his career. He was a decorated Knight Grand Cross Equestrian Order of the Holy Sepulchre of Jerusalem and named Knight of St. Gregory by Pope John Paul II. He was a commander of the Louisiana chapter of the Military Order of Foreign Wars, state and local president of the Navy League of the United States where he remained active until his death.

Services for Acomb will be held privately. Gifts can be made to the Admiralty Law Scholarship in honor of Robert B. Acomb Jr. at http://giving.tulane.edu/acomb or by check sent to Tulane University P.O. Box 61075 New Orleans, LA 70161-9986.