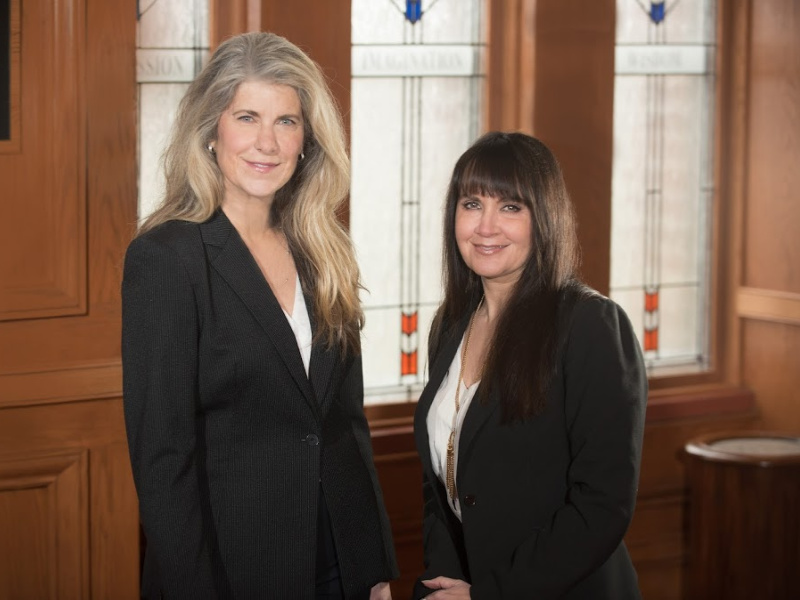 (L-R) Katherine Mattes, Director of the Criminal Justice Clinic, and Becki Kondkar, Director of the Domestic Violence Clinic, are working together with Tulane Law students to assist women who were victims of domestic violence as they seek justice decades after their convictions. The Women's Prison Project is a joint effort between the two clinics. (Photo: Tracie Morris Schaefer)

The award, the highest honor conferred by the American College of Trial Lawyers on a single organization annually, recognizes programs whose principal purpose is to maintain and improve the administration of justice. It comes with a $100,000 grant.

“We’re grateful to the American College of Trial Lawyers for this very significant recognition and support,” said law Dean David Meyer.  “The Women’s Prison Project is an innovative and important extension of Tulane’s proud leadership in clinical service and education, and its work has only grown more urgent in the current crisis.”

The Women’s Prison Project is a first-of-its-kind collaboration between Tulane’s Domestic Violence and Criminal Justice clinics and focuses on providing legal representation to domestic violence survivors charged or imprisoned after killing an abuser or for having committed crimes under an abuser’s coercion or duress. Clinic students get hands-on legal training and the women receive representation on their legal cases, and at their parole or clemency hearings.

“This award presents an opportunity to shed light on an issue few people even know about. Too many incarcerated women continue to serve long or life sentences for killing abusive partners, often decades ago and long before our societal understandings of domestic violence evolved into what they are today,” said Tulane Domestic Violence Clinic Director Becki Kondkar. “Their decades of incarceration have rendered them invisible – now it’s both necessary and urgent that we bring their stories back into the public consciousness.”

The $100,000 grant will create an inaugural Access to Justice Fellow at Tulane who would spend 18 months dedicated to expanding access to justice to imprisoned women.  The Fellow would expand the WPP’s current reach by creating a model how-to program, developing a practice manual, training modules, and a social science resource bank that can be replicated around the country, giving women who represent themselves access to the legal materials they need.

Because the imprisoned don’t have access to lawyers post-conviction,  women are rarely able to meaningfully address the complex issues of domestic violence, abuse, and trauma that so often lead them to prison, and that should be raised during these legal proceedings.

“There are far more incarcerated women in need of legal help than our Project will be able to represent,” said Katherine Mattes, who directs the Criminal Justice Clinic. “This award will extend the reach of the WPP, providing training and resources to the women who are forced to represent themselves.”

ACTL President Douglas R. Young said that the organization’s mission of providing access to justice nowhere has been more deserving of support than in the cases of women who have been jailed for defending against an abusive partner.

“The College fully embraces the visionary work of the Tulane Law School Women’s Prison Project in creating its inaugural Access to Justice Fellow," Young said. "By developing a model program to ‘educate, train, and provide resources for incarcerated women’ in post-conviction proceedings, where the right to counsel does not exist, the Women’s Prison Project will significantly expand the rights of  those who deserve to have their life stories fully presented in the context of legal proceedings where those stories may make a difference.  The College is proud to assist this creative and much-needed project, which will thrive in the spirit of the Emil Gumpert Award.”

In addition to the Fellow’s work, the WPP, in partnership with the American Bar Association’s Commission on Domestic & Sexual Violence (of which Kondkar is a member) would create a national publication, a webinar, and presentations at two national conferences to encourage the Project’s wider application in other jurisdictions. At Tulane, the training project will be sustained by future generations of clinic students.

In Louisiana, the WPP is already changing the discussion of domestic violence and imprisoned women.

“Many of these women were convicted during a time when the legal system - police, attorneys, judges, and juries - knew little about the dangers and dynamics of abuse; many had sought protection to no avail and were defending themselves in their own homes,” said Kondkar. “In other words, some never presented a risk to public safety in the first place, and many would never be convicted today.”

Alumna Judy Barrasso (L’81), a member of the law school’s Dean’s Advisory Board and a Fellow with the American College of Trial Lawyers, heard about the WPP just as it was starting.

“I thought there was nothing like it in the U.S. and that they really should apply for the Gumpert,” Barrasso said.

The Women’s Prison Project application “stood out” among the more than 40 applicants, said Barrasso, who is also a member of the Gumpert selection committee. During the final rounds of selection, Barrasso stepped out of the process, she said. When she heard they had won the honor, she was elated.

“As an alum, I’m very proud that a program that Tulane pioneered is getting the recognition it deserves,” she said. “And the fact that it can be replicated and used by others to help these women in prison is something that will benefit so many.”

Tulane’s WPP joins an exclusive group of previous Gumpert Award winners who are standout examples of social justice programs. In 2019, the College gave the award to the Indigenous Human Rights Program in Toronto, Canada, which provides legal clinical work for native people in Canada.

The Gumpert Award is made in honor of the late Hon. Emil Gumpert, Chancellor-Founder of the American College of Trial Lawyers. Judge Gumpert, throughout his more than half-century professional career as an eminent trial lawyer, State Bar president and trial judge, substantially and effectively devoted himself to the administration of justice and to the improvement of trial practice.