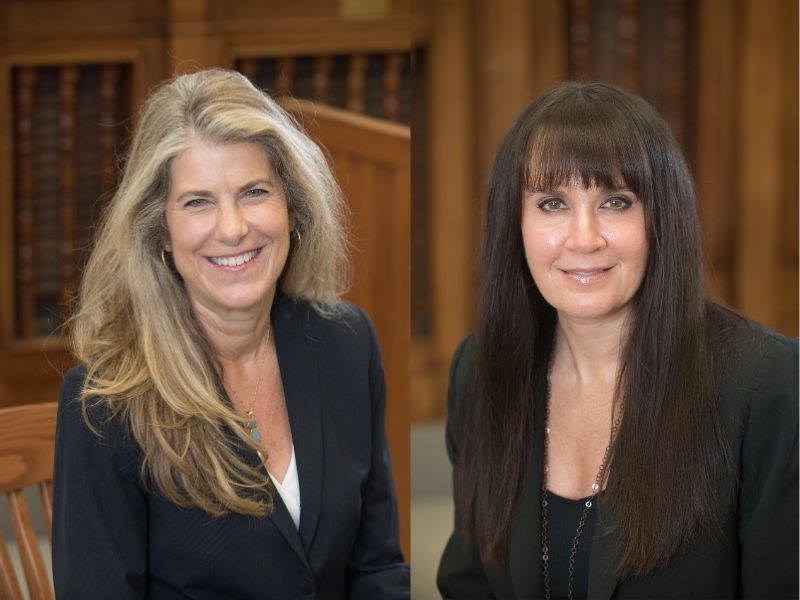 Profs. Katherine Mattes (left) and Becki Kondkar launched the Women's Prison Project a year ago to help incarcerated women jailed for life for killing abusive partners, and others accused of crimes while under duress from abusers. A joint effort by the Domestic Violence Clinic, led by Kondkar, and the Criminal Justice Clinic, led by Mattes, the Women's Prison Project is changing the way Louisiana deals with victims of domestic violence charged with serious crimes. (Photo credit: Tracie Morris Schaefer)

Courtney Crowell was not unlike other young law students – working hard her last year at Tulane Law School with the ultimate goal to launch a successful legal career.

But that was before she was one of the first students chosen to work on a new pilot program through Tulane’s legal clinics tasked with helping incarcerated women jailed for life for killing abusive partners.

Her year as a student-attorney in the Women’s Prison Project, a joint effort between Tulane's Domestic Violence and Criminal Justice clinics, led her to represent a woman serving life for murdering her abuser while he was in the act of trying to kill her. It changed everything: For the client,  whose request for a commutation of sentence was ultimately approved by Louisiana's Board of Pardons and Parole, and for Crowell.

“Abuse and trauma is a primary pathway to prison for most incarcerated women, regardless of the crime."

“It was, by far, completely life changing for me, personally and professionally,” says Crowell (L’19) now a practicing attorney in New Orleans. “It completely changed my priorities and showed me the kind of lawyer I want to be, and how I want to build my legal career.”

Her experience made it Crowell’s enduring mission to make time to do pro bono work in domestic violence. “It changes a young lawyer. Suddenly you reevaluate your priorities and realize the power behind that degree and that license; and you have to help other people, not just use it for self-gain.”

“Our legal concept of self-defense does not adequately encompass the experiences of women in dangerous relationships,” says Kondkar. “What we see time and time again is that domestic violence, its effects, and its consequences, have been disturbingly misunderstood within the criminal justice system – by police, by prosecutors, and even by the defense lawyers tasked with representing these women. Womens’ experiences of abuse become both buried and distorted by a justice system that fails them.  In almost every case we’ve examined, there were missed opportunities to intervene before these tragedies; and in almost every case, these self-defense killings were preceded by a series of events that could have resulted in an intervention.  The bottom line is that when women are left to fend for themselves - when the criminal justice system fails to take their abuse seriously - the self-help they must resort to leads them to prison.”

The mission of the WPP is particularly important in Louisiana, where men kill women at one of the highest rates in the country, with state domestic violence advocates calling it a crisis.

When women in Louisiana are convicted for killing abusive partners,  they are often sentenced to life in prison under draconian mandatory sentencing guidelines for second-degree murder. Domestic violence services are woefully underfunded, a recent report found, and the criminal justice system fails to protect women before a homicide occurs.

Crowell’s and the WPP’s work with the client, her children and siblings, the examination of the cycle of domestic violence and its impact on one family, was the perfect snapshot of the state’s inadequate protection of a victim to bring before the state’s Board of Pardons and Parole.

And it’s not just women who killed their abusers who the WPP plans to represent.  According to Kondkar, many women are also incarcerated for having participated in crimes at the behest of an abuser.

“Abuse and trauma is a primary pathway to prison for most incarcerated women, regardless of the crime," she said. "Only a small portion of incarcerated women do not attribute their incarceration, at least in part, to a history of abuse and/or an entanglement with an abusive man.”

For Kondkar, the WPP provides a vital lesson to students in making the invisible visible. “These women disappear from our social consciousness once they are sentenced to life in prison; their cases see no “daylight.”

“If the average citizen were to know and understand the extent to which women are languishing in Louisiana’s prisons for having tried to prevent a strangulation, a rape, or other serious bodily injury - or for  having acted under the duress of a dangerous abuser - they would be shocked. The fact that these women will die in our prisons if we do nothing, is something every citizen should know about and care about.”

Through the Women’s Prison Project, students in both clinics gain hands-on legal training while advocating for clients in parole and clemency hearings, post-conviction appeals, and at the trial court level. They not only represent clients, but they also develop and advocate for reforms across the system, including training other lawyers, judges and legal professionals.

"There are so many women in Louisiana sentenced to die in prison for defending themselves. We have a lot to do, but we have a lot of hope," said Mattes. "Hope because the time is ripe for reform; hope because there is a growing awareness about intimate partner violence; and hope we get from these women who despite everything haven’t given up."

“Students pore through court records, track down additional evidence, interview witnesses, research and write briefs for each case.  It is a tremendous amount of work,” said Mattes.

Crowell, for example, recalls intensive efforts to study her client’s life before the killing and after conviction.  She addressed the extensive history of abuse leading up to the killing, and also the subsequent positive impact the client had on those around her, even while in prison.

“In my client’s case, she touched the lives of people on the inside and on the outside. When she couldn’t get what she needed in prison, she created programs to help herself and others in prison. And at her urging, her sister and daughter went on to pursue college degrees. She made life better in all of her communities.”

Third-year law students Lilly Cutter and Claire Burkes spent last summer researching every thread of information in another case of a woman who killed her abusive partner. The woman had served more than 23 years in prison, and while there, became a grief counselor, a mentor to other inmates and established a library to help domestic violence victims.

The two students prepared the case to go before the Pardon and Parole Board, but then, something unusual happened. One of the board members was so impressed with their work that he asked them to summarize their findings for other members.

“That never, ever happens,” said Mattes, explaining how surprised both clinicians and students were by the request. “Normally, she would have just given a summary, but without missing a beat Lilly walked the board through the full history of abuse, the facts of the case and the client’s accomplishments in prison. It was amazing.”

The experience with WPP and the case affected Burkes so much, she is thinking her advocacy skills could serve a prosecutor’s office well – one piece of the justice system that often lacks expertise on the impact of domestic violence.

“I would be happy working exclusively on these types of cases, with these women, because this kind of advocacy is clearly missing in framing innocence and what that means,” Burkes said.

As for Cutter, she always planned public interest work, but now is “actively pursuing a career in post-conviction work.”

“It would be an incredible career to help these victims,” she said. “I really found where I want to be.”

One final role for the WPP is that Kondkar and Mattes expect it to become a think tank to assess proposed law, policies and reforms in Louisiana. The goal is that changes take into consideration the culture of domestic violence, its impact and its victims, and that they offer greater protections for the abused.

“Our goal is that women who are innocent of murder be treated as if they are innocent of murder. I never want to read another judicial opinion that says my client “provoked her own abuse," said Kondkar. "Not one more woman who is defending her life against an abusive man should go to prison. We can do better than this.”