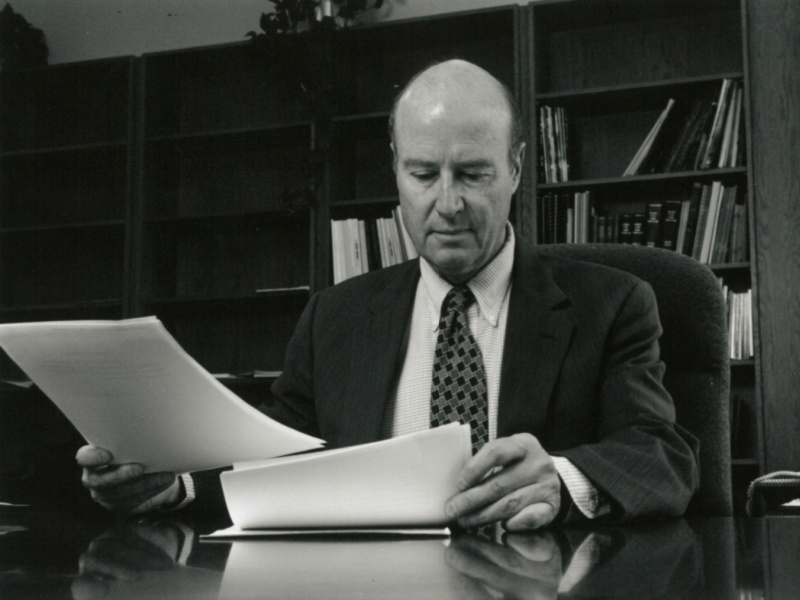 Tulane Law School will host a celebration of the life of Dean Edward Sherman -- the school's 20th dean --  Friday, Nov. 18.

Sherman led the law school 1996 to 2001 and died in June at the age of 84. The event will take place at 4 p.m. in room 110 of the John Giffen Weinmann Hall, with a reception to follow. Students, friends and colleagues are welcome to attend.

Among the guest speakers will be Professor Catherine Hancock, a longtime colleague of Dean Sherman, as well as Professor Richard Marcus of U.C. Hastings College of Law, Stephen Herman, partner at Herman, Herman and Katz, Edward Snyder, founding partner at Castillo Snyder and Jeremy Grabill, partner at Phelps Dunbar.

Dean Sherman's family will also be in attendance.

In addition to his deanship, Sherman served as W.R. Irby Chair and David Boies Chair at Tulane Law until his retirement in 2015.  Throughout his career, he was an accomplished scholar in complex litigation, class actions, military law, civil procedure and a pioneer in the art of Alternative Dispute Resolution.

Sherman was a 1959 graduate of Georgetown University and earned his LLM in 1962 and an SJD in 1981, both from Harvard Law School. He also received master’s degrees in 1962 and 1967 at the University of Texas at El Paso.

In 1967, Sherman became a teaching fellow at Harvard Law School after working in private practice and serving in the Vietnam War. The job launched his career as a law professor and dean. Two years later, he began teaching at Indiana University School of Law, where he became one of the country’s leading experts on military law. There, he also maintained his activism and social justice efforts.

From Indiana, he took a position at the University of Texas Law School, where he honed his expertise in civil procedure, complex litigation, ADR, among others. Sherman joined the Tulane Law family in 1996 as its Dean after 19 years on the faculty at the University of Texas Law School.  His kind personality and his willingness to solve problems made him beloved by faculty and students alike.

When he stepped down as Dean in 2001, he remained an active leader on the faculty until his retirement, becoming professor emeritus. In 2012, true to his love of poetry and literature, he endowed funds to create the Dean Edward and Alice Sherman Law and Literature Room in the law library, a place “where law students can read, browse and check out literature and fiction related to the law.” The room holds some of Sherman’s collection of books on poetry and literature.

In addition to his significant accomplishments as Dean, Sherman published nearly a dozen books and 100 articles and book chapters, and was the principal drafter of the Texas and Louisiana mediation statutes as well as the Republic of Vietnam’s Code of Civil Procedure.

In 2004, the American Bar Association awarded Sherman its Dean Robert McKay Award “in recognition of [his] . . . commitment to the advancement of justice, scholarship, and the legal profession.” Four years later, the ABA again honored him with a Special Achievement Award for his extraordinary contributions to the improvement of justice relating to class actions and complex litigation.

Sherman is survived by his wife, Alice, and sons Ned and Paul, his grandchildren Ted, Nora, Katlia and Lila, daughters-in-law Tinzar Sherman and Kelly Sherman, and many other family and friends.