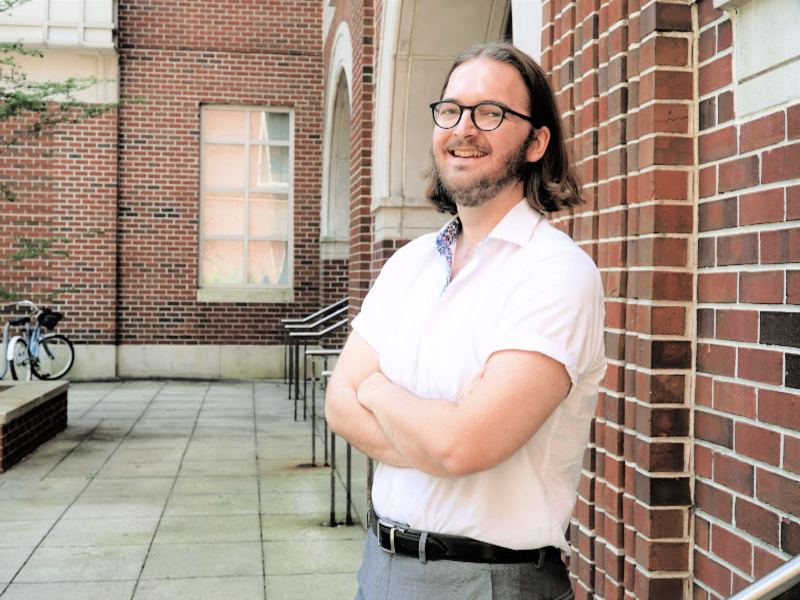 After graduating, Jacob McCarty (L'21) will clerk for Chief Judge Nannette Jolivette Brown (L’88) of the Eastern District of Louisiana. Eventually, he hopes to return to the Orleans Public Defenders, the place that led him to law school.

Looking back, Jacob McCarty still gets a little choked up about where he began: A kid from Wrightsville, Ark., population 2,000.

Despite his humble upbringings, his teachers noticed his love of learning early on. One of his teachers encouraged him to apply to be a magnet student at the larger and better-resourced school district in Little Rock, so he could be challenged.

That move landed him at Tulane for his undergraduate, and the start of his love affair with New Orleans, a city “I’ll probably never leave again,” he says.

Today, he is ranked at the top of his law class, is a cancer survivor, an advocate for the LGBTQ community, a student leader and mentor, and is an editor of one of the oldest student-run law journals in the country, the Tulane Law Review. Recently,  he received one of Tulane’s most prestigious student honors, the Tulane 34 Award, and was voted by the law school faculty as his class' John Minor Wisdom Award recipient, given to the student who is an outstanding JD candidate, has demonstrated excellence in academic work and in writing ability, and has contributed selflessly to the law school community, and who has accepted a federal or state judicial clerkship after graduation.

“Life and Tulane have both challenged me with all kinds of experiences,” said McCarty (SLA'12, L'21). “Those challenges drive me to criminal defense work. So many things affect the outcome of someone’s life, and it’s the job of lawyers to help courts understand the humanity of the people they represent.”

To know McCarty is to understand that his motivation is, almost to a fault, his concern for other people.

With an undergraduate degree in 2012 in Gender and Sexuality Studies and Psychology, he was hired by the Orleans Public Defenders (OPD) on a project helping remove LGBTQ defendants who had been convicted of a Crime Against Nature from the sex offender registry, a throwback to outdated and draconian Louisiana statutes. He would eventually be assigned to run a task force implementing a diversion program for people accused of misdemeanor prostitution.

“I was completely changed by the unwaveringly dedicated attorneys of OPD”, he said. “They are all doing such profoundly important, high-quality legal work. And it was holistic work, which speaks to me.”

For him, the next logical step was law school – so that he could perhaps return to OPD and offer that high-quality legal representation to his clients as a lawyer.

“I knew I could be more effective as an attorney, even though I had never planned on going to law school,” said McCarty, who this week graduates with the Tulane Law Class of 2021. “I was excited and ready.”

He was accepted at Tulane Law in the fall of 2017.  But something was off. “I was really sick when I started. I had bed-drenching night sweats. I lost all desire to eat. I was always fatigued. I had a giant lump in my neck,” he said, adding that his weight loss – 60 pounds in four months – was shocking to his friends.

McCarty got the diagnosis in his third week of law school: Lymphoma.

Just a few weeks into the start of law school, McCarty made the decision to take medical leave.

“I felt really guilty about not just toughing it out,” said McCarty, but chemo every other week and radiation every day was just too much. Life is not a race, he told himself.

Then, something wonderful happened. As his New Orleans friends set up a GoFundme page, to help the now-jobless law student with is living expenses, his new law school family pitched in.

“It was really humbling the way the Tulane community chipped in to care for me. People that were complete strangers,” he said. “I knew I had to pay it forward when I came back.”

By the end of the first semester, in the middle of chemotherapy, McCarty emailed Dean of Students Abigail Gaunt to check-in.

“I wrote her and said, ‘Truly the hardest part of chemo is that I would much rather be studying for finals,’” McCarty recalled. “A year later, when I was studying for my first exams, Dean Gaunt forwarded me our old email to remind me that a year ago I couldn’t wait to be there. Her email was such a thoughtful touch, and a great reminder to have some perspective.”

He returned with fervor in the fall of 2018 and his stamina to learn, grow, and absorb this experience has never wavered. In his second semester, though, his excitement about school really took off. He took his first civil law class with Prof. Sally Richardson, where he fell in love with Louisiana’s Civil Law tradition. “I just thought, this is it! I want to be here.”

After his first year grades came in, McCarty was invited to join the Tulane Law Review.

“I was really blown out of the water,” said McCarty. “I’m a first-generation college student; no one in my family is a lawyer. And to end up on Law Review was really humbling for me.”

And McCarty made good on his commitment to give back to the school. In his second year, he became a Harris Fellow, mentoring other students.

But he didn’t stop there. He was an Academic Support Program Tutor, tutoring first-year students, and President of the Civil Law Society. He spent his summers giving back, too. First at the MacArthur Justice Center in New Orleans, working on cases ranging from challenges to the death penalty, to police abuse of protestors’ First Amendment rights. Then, in his second summer, he worked with Brown Goldstein Levy, a Baltimore public interest firm focused on disability rights.

This past year, he was a Student Attorney in the Criminal Justice Clinic, where he has represented indigent clients at both the pre-trial and post-conviction stages.

Now, as graduation from law school nears, McCarty is as dedicated as ever to paying it forward. “The love and support of my friends means the world to me,” he said. “It’s a good reminder to be in the habit of being kind to people. No matter what I am doing, I will put my heart into it.”

After graduating, McCarty will clerk for Chief Judge Nannette Jolivette Brown (L’88) of the Eastern District of Louisiana. He is applying for circuit clerkships, and then he plans to go to OPD.

“I want to take these excellent skills that Tulane gave me and give my clients the high quality, legal representation that the Constitution guarantees them.”