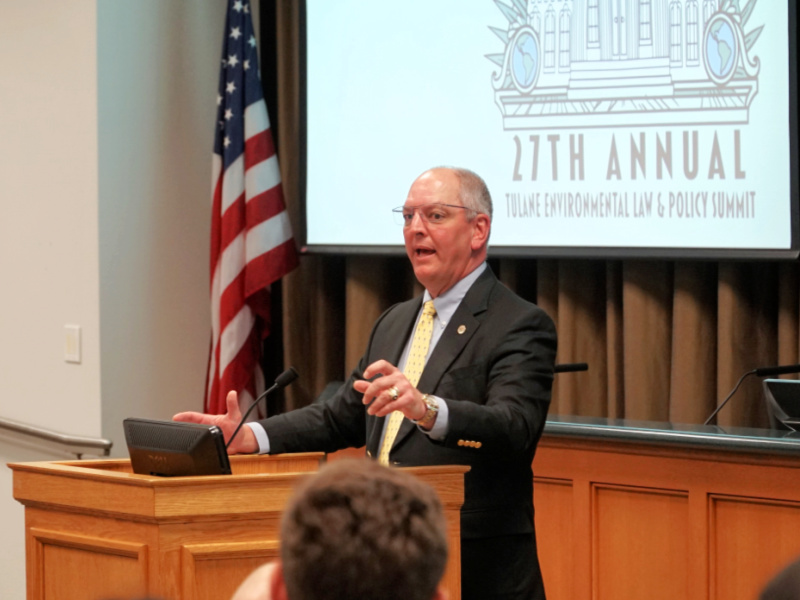 While Louisiana is uniquely vulnerable to the impacts of climate change, it is also uniquely positioned to take advantage of emerging opportunities in the transition to renewable energy, Gov. John Bel Edwards said during his keynote speech at the 27th annual Tulane Environmental Law and Policy Summit.

“We are moving our state forward both in combating climate change but also in bolstering our economy,” Edwards said to packed room at the Summit, which annually attracts hundreds of academics, environmentalists, policymakers and others interested in environmental law and policy.

“This plan is going to be key to investment and job creation, for economic development because this is where capital is going to flow. We are ground zero for climate change but we also have a tremendous amount of potential for investment from companies who want to make a difference.”

Edwards spoke about the state’s recently approved Climate Action Plan, the only such plan in the Gulf South that provides a blueprint for the state to reach net zero carbon emissions by 2050 by moving away from its traditional oil and gas roots to more renewable forms of energy, especially wind and solar. The plan lists 28 strategies the state can undertake to address climate change and bolster economic investment to transition from economic dependency on the oil and gas industry.

The governor struck a tone of optimism and resourcefulness, acknowledging that the plan, approved by a broadly-representative task force of stakeholders including industry representatives, environmentalists, academic and grassroots community leaders,  would have to be implemented from “the bottom up.”  He put the responsibility squarely on a market-driven effort rather than the state’s legislature. 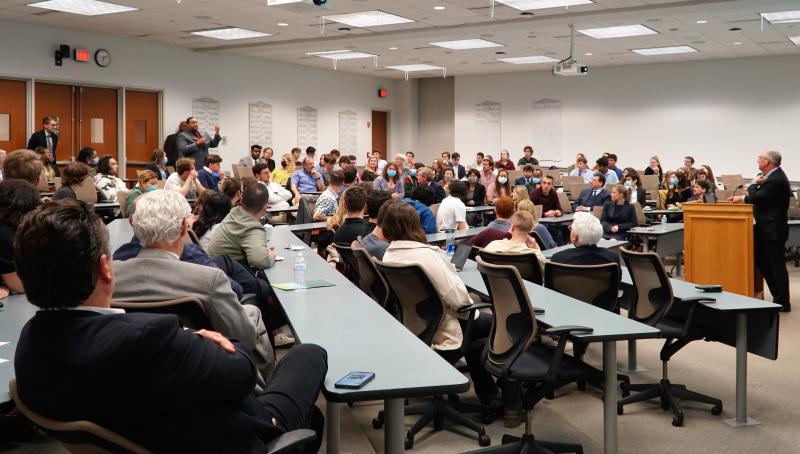 While calling on the plan as a way to bridge the gap of this economic transition, he also acknowledged that it will take time to convert the business community, which is hesitant to dive in to renewables. His plan is a starting point for that transition, because the state can’t wait, he said.

“If you wait until everything is figured out, the funding is in hand, the projects are all concrete, guess what? You’ll never get started,” Edwards added.

The governor’s visit comes just two years after he helped Tulane Law School launch its Center for Environmental Law, which is working at the intersection of environmental law and policy to explore emerging trends for resiliency, sustainability and climate change.

Coupled with the work of the Tulane Center for Energy Law, which is leveraging its expertise on the exploitation, utilization and regulation of various sources of energy, both domestically and with an international perspective, the university has been a leading resource for the state’s sustainability and economic development efforts.

Most recently the Tulane’s environmental and energy centers are working on energy transition issues in collaboration with GNO, Inc., Kristoffer Svendsen, a senior research fellow with the Tulane Center for Energy Law, and Douglas McKeige (L’86), a distinguished research fellow with the Tulane Center for Environmental Law and editor-in-chief of The Climate Capitalist, to produce a Wind and Energy Transition Law conference in New Orleans next year.

The governor also addressed spinoff emerging industries, including those managing environmental concern, such as wildlife and vegetation management. Tulane Law is collaborating with alumnus Larry Kahn (L’95) to establish a Utility Vegetation Management initiative that for more than a year has been training law students in this emerging field at the intersection of energy and environmental law. Kahn is a Visiting Fellow with the TCEL.