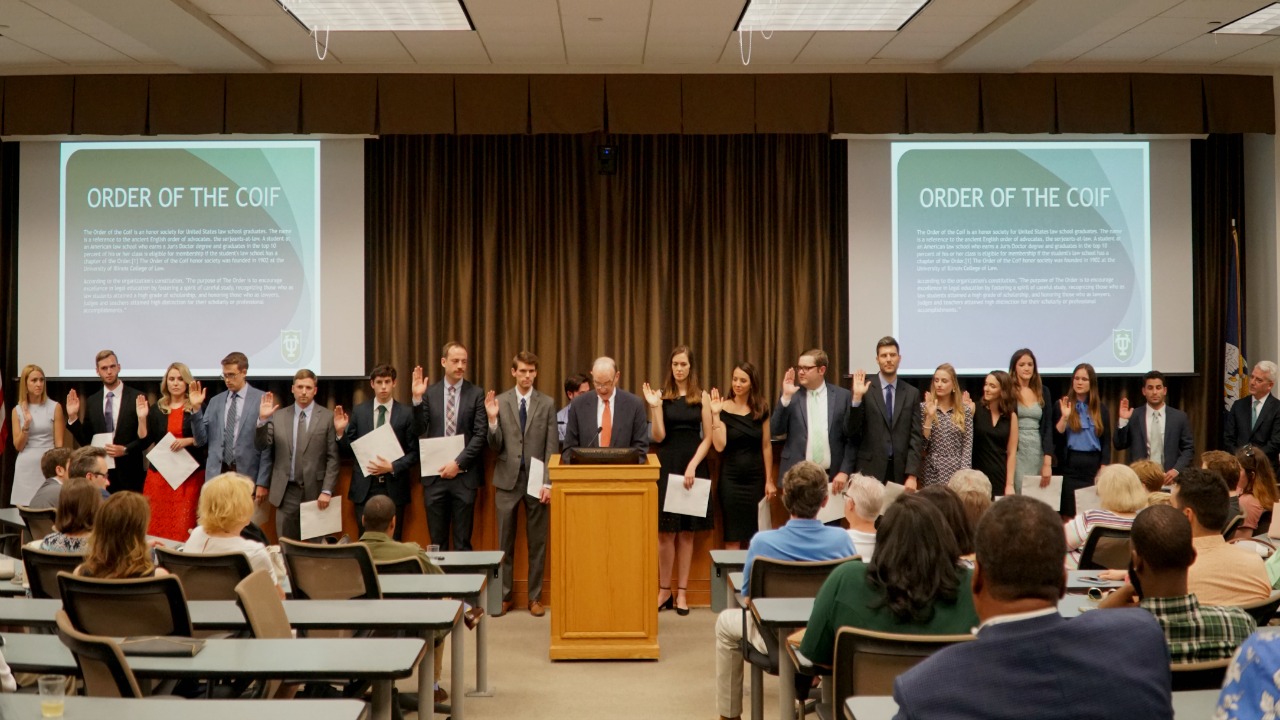 The Class of 2019 inducted 17 students into the Order of the Coif, students who have achieved exceptional scholarship.

Tulane Law School honored dozens of third-year students who had excelled in scholarship, leadership, academics and service during the annual Graduation Awards ceremonies Friday, May 17, at the John Giffen Weinmann Hall, on the eve of 2019 commencement.

The class of 2019 has excellend academically and in service to the community and their fellow classmates. On Thursday, three members of the graduating class were awarded the Tulane 34 Award, one of the highest student honors at the university. They are Anais Moore-Jaccard, Erin Morrissey and Radha Venkata Padma Yerramilli.

The awards conferred were Friday were:

The Order of the Coif. In 1912, the American Order of the Coif was founded through the merging of the Theta Kappa Nu legal fraternity of the University of Illinois and an organization known as Coif founded at Northwestern. The basic purpose of this Order was to encourage and recognize exceptional scholarship in the study of law in American law schools. The Class of 2019 members are:

Order of the Barristers. This national honor society is dedicated to the encouragement of oral advocacy and brief-writing skills through law school appellate moot court programs.  Students who have demonstrated excellence in Tulane’s Moot Court program are selected for membership. The members of the Class of 2019 are:

The Joseph A. Ettinger Award is given to students for the performance in the Civil and Criminal Litigation Intersession courses.

The Clinical Legal Education Outstanding Clinical Student Award. For excellence in clinical fieldwork and for exceptionally thoughtful, self-reflective participation in an accompanying clinical seminar, as nominated by the clinical faculty at Tulane University Law School.

The Louisiana State Bar Association Law Student Pro Bono Award. This award is presented to a law student who has demonstrated a dedication to providing legal services to the indigent.

The Brian McSherry Community Service Award. This fund was endowed in memory of Brian McSherry, a 1981 graduate of Tulane Law School.  An award is given annually to the graduating student who has demonstrated the greatest dedication to the Law School’s community service program.

The General Maurice Hirsch Award. Endowed by Mrs. Elise Newman Solomon to honor the life and achievement of General Hirsch, this award is presented each year to the graduating student who, in the judgment of the faculty, has contributed most distinctively and constructively to university or community needs.

The James A. Wysocki Trial Advocacy Awards. This award was endowed by Mrs. Cristina Wysocki to honor the life of her husband, a noted trial attorney and graduate of Notre Dame, who respected and admired Tulane trial lawyers.  The fund provides cash prizes to the students who have outstanding achievement in Trial Advocacy.

The Louisiana State Bar Association Corporate and Business Law Section Award. An award is given to the graduating student with outstanding achievement in the study of corporate law.

The Haber Joseph McCarthy Environmental Law Award. This award was created in memory of Haber McCarthy, a 1985 graduate of Tulane Law School.  The award goes to the graduating student who has outstanding achievement in the study of environmental law.

LLM Academic Excellence Award. Recognition is given by the Dean to highest achievement in the LLM program.

The George Dewey Nelson Memorial Award. The student in the graduating class who attains the greatest distinction in common law subjects throughout the three years of law study is awarded a certificate in recognition.  George Dewey Nelson, Jr., a Tulane law alumnus, created this award in honor of his father.

The Civil Law Studies Award. Established in 1983 by the Louisiana State Bar Association, this award is presented to the graduating student who has the highest grade point average in civil law courses.

The John Minor Wisdom Award. This award was endowed in 1987 by the former law clerks of the Honorable John Minor Wisdom.  The recipient must be an outstanding JD candidate who has demonstrated excellence in academic work and in writing ability, has contributed selflessly to the law school community, and who has accepted a federal or state judicial clerkship after graduation.

The Dean's Medal. This award is given by the Dean of the School to the graduating student who attains the highest grade point average during the third year.

The Faculty Medal. This award is presented by the Tulane Law School faculty to the graduating student who attains the highest grade point average in the entire course of three years in the School.