#TogetherTulaneLaw: A poignant virtual send-off for the Class of 2020 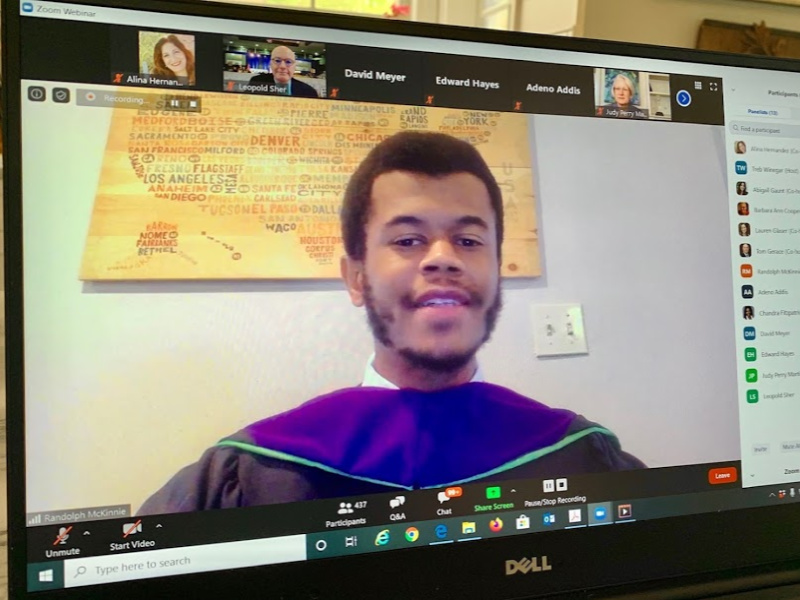 Spread across the miles, the members and families of Tulane Law’s Class of 2020 felt closer than ever.

A weekend of virtual celebrations for the graduating Class of 2020, by all accounts a wholly new experience, brought poignant moments for third-year law students on their last weekend before becoming, officially, alumni.

The law school plans an in-person graduation at a later date. Therefore, the end-of-semester send-off was meant to celebrate the milestone informally, but meaningfully.

“We wanted to give graduating students a chance to gather with their families and with the faculty to celebrate this important moment of accomplishment and transition,” said Dean David Meyer.

“It was genuinely moving to see what a powerful sense of community we were able to demonstrate notwithstanding the distance and the technology,” he said.  “Though we probably had close to two thousand people online during our celebration of the graduating class, in some ways it felt more intimate and communal than a traditional graduation event.”

Beginning on May 15, an evening graduation awards ceremony honored the class’ scholarship and service, with dozens of students joining the ranks of the prestigious Orders of Coif and the Barristers.  Among those honored were the law class’ valedictorian, Oliver Kaufman, and three students who received the university’s highest honor for leadership and service, the Tulane 34 Award. They were Kansas Guidry, Hannah LaFrance and Jenna Raden.

The law school also honored those whose pro bono work changed the community over the course of their three years, giving the class more than 24,000 hours of pro bono service, believed to be a record.  Among them was Caroline Green, who won the Louisiana State Bar Association Award for service, having logged in 591 pro bono hours helping to defend the indigent.

But it was the events on Saturday, May 16, that most touched families and graduates. First, the university-wide “TUgether-Connecting the Class of 2020” celebration led by Tulane President Michael Fitts treated the graduates to a star-studded party with appearances by the likes of Ellen DeGeneres, Madeleine Albright, Drew Brees, Hoda Kotb, Kelly Ripa and Apple CEO Tim Cook.

Later in the afternoon, in lieu of its now-postponed graduation ceremony, the law school held its own tribute to the Class of 2020.

Students heard from Class President Randolph McKinnie Jr. – wearing his graduation robes -- who encouraged them to remember the lifelong friendships that they had made. They were feted with a series of videos featuring advice and hearty congratulations from faculty and alumni.

Alumna and ABA President Judy Perry Martinez (L’92) told students that the most important thing to remember as new lawyers was to do good for others, and encouraged them to keep a service mindset as they shaped the profession in the future.

The class honored three faculty members whom they had selected as having the most impact on their learning. The Felix Frankfurter Award was bestowed on Prof. Adeno Addis, who teaches constitutional law and international human rights law, among other areas.

The award is given to a full-time faculty member who has demonstrated outstanding commitment to classroom teaching.

Adjunct professors Leopold Sher (L’76) and Edward Hayes shared the Monty Lemann Award, which is given to a member of the adjunct faculty for outstanding teaching and service.  Sher teaches a course on Contract Drafting and Hayes teaches a seminar on international trade law.

Mostly, graduates heard from each other, about favorite memories while at Tulane, of what was next for some of them and what they hoped for their futures.  Families were able to post greetings in a virtual chat, and along with congrats and well-wishes, provided colorful entertainment even as the planned event was in progress.

A final video closed out the ceremony with encouraging advice from alumna Taryn Brown (L’09) who herself graduated in the midst of a recession. “I have two words for you,” Brown said in her opening. “Tough skin. This is the gift that life has given you, the same gift it gave me and it has served me well.”