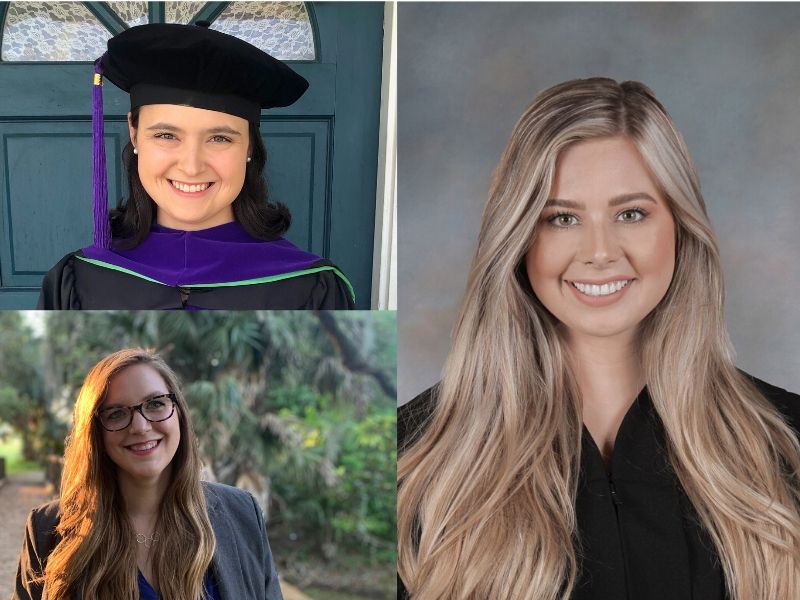 Clockwise: Kansas Guidry, Hannah Lafrance and Jenna Raden were selected as Tulane Law's 34 Award recipients. The 34 Awards are given to students who have demonstrated leadership, academic excellence and commitment to service to the community.

Three Tulane Law graduates were honored during end-of-year celebrations as recipients of the 34 Awards, the highest honor given to those students who have provided exceptional leadership and service during their time at Tulane.

A poignant send-off for the Class of 2020

Guidry, is a native of New Orleans’ West Bank who graduated from St. Mary’s Dominican High School and went on to receive an undergraduate degree in Political Science and History from Fordham University. She led some 50 student writers as the top editor of the prestigious Tulane Law Review which publishes five issues during the academic year.

“I have been very fortunate to have worked with Kansas over the last year as she has served as Editor-in-Chief,” wrote Law Review faculty advisor Prof. Ronald Scalise in her nomination. “At every turn, Kansas has exhibited the kind of careful and thoughtful judgment that is a model for other Journal students that she so ably leads. Kansas has consistently put the best interests of the Journal at the forefront of every decision she has made. Her commitment to academic quality has kept the Tulane Law Review in the high position of prestige that it deserves.”

In addition to her work as editor, Guidry has demonstrated an impressive academic record, winning eight CALI Excellence for the Future Awards, given to students with the highest grade in each course. She also competed on the Moot Court International Appellate Team and worked in the community, both through the Tulane Legal Assistance Program (TULAP) and through several legal aid organizations in New Orleans serving the needs of the most vulnerable.

After graduation, she will begin clerking for the Honorable Barry W. Ashe of the Eastern District of Louisiana, and after that, with the Honorable Judge Jacques L. Weiner, Jr. of the U.S. Fifth Circuit Court of Appeals. Following her clerkships, she will join the firm of Barrasso, Usdin, Kupperman Freeman and Sarver LLC as an associate.

Lafrance is a native of Plaquemines Parish,  a Mount Carmel Academy graduate, and a Louisiana State University undergraduate who achieved the highest academic honor at LSU, becoming a university medalist for having among the highest GPAs in the 2017 class. Lafrance has been an active part of the Moot Court program, participating in the Argue-On competitions and earning a spot on the Mock Trial Team. During her second year of law school, she spent a great deal of time competing and honing her advocacy skills. She earned her team’s Most Hours of Service Award, bestowed on the student who spent countless hours serving the program. She was the executive chair for the 24th annual Tulane Environmental Law and Policy Summit, a fully-student run environmental law conference. As Chief Justice, Lafrance joined an all-female executive board leading the Moot Court Program, which hosted a negotiation competition and an appellate competition, accommodating over 100 student competitors from more than 20 law schools across the country. Although the year was significantly shortened due to Covid-19, the four teams that make up the Moot Court Program had one of its most successful competition seasons, bringing home13 team and individual awards, including multiple first place prizes.

“Hannah performed admirably as Chief Justice of Moot Court this year,” wrote Dean Stacy Seicshnaydre, one of the program’s faculty advisors. “She is an exceptional planner and an unflappable administrator. Her planning and hardwork have resulted in a high performing leadership team that anticipates and accomplishes whatever must be done on behalf of students and the program.”

After graduation, Lafrance joins the New Orleans firm of  Krebs, Farley, and Dry which specializes in complex commercial litigation.

Raden has been an impressive student, but particularly made her mark on Tulane this spring, winning the prestigious Burton Award for legal writing. Her Comment gave Tulane Law School its fifth award in seven years and detailed how some communities around the country are using municipal incorporation to exclude poor and often minority communities from their boundaries, disproportionately disenfranchising them from important public services, like strong-performing public schools.

Raden is an outstanding scholar with one of the highest GPAs in the graduating class, but it is her commitment to public service that makes her a standout. Raden arrived in law school after working at the Orleans Parish Public Defenders Office, coordinating the representation of indigent clients. She has volunteered for years with the Greater New Orleans Fair Housing Action Center, aiding in their mission to end housing discrimination. She has supported organizations focused on child welfare and criminal justice reform as a Court Appointed Special Advocate for foster care children, as a tutor for STAIR (Start the Adventure in Reading) and a volunteer for the Innocence Project and Unanimous Juries Coalition.

As a law student, she worked with the Southeast Louisiana Legal Services and the Southern Poverty Law Center. She gave 430 pro bono hours as a law student, and was recognized last year by the American Counsel of Association as the Stanley Cohn & James Dorsett Public Interest Award given to only one law student in the Fifth Circuit jurisdiction who excels as a scholar and exemplifies dedication to public interest law.

In addition to other service work, such as tutoring 1L students, she was a student attorney in the Civil Rights and Federal Practice Clinic where she litigated on behalf of tenants sexually harassed by their landlord as well as an employee discriminated against on the basis of her disability.

“Jenna Raden stands out in a crowd as a seasoned professional with great depth, proven work ethic and laser-focused passion,” wrote Dean Seicshnaydre, who has mentored Raden, in her nomination. “I have found her analytical skill and writing ability to be exceptional. Without blowing her horn or engaging in self-promotion, she conveys pretty quickly that she is willing and able to go the distance and perform at the highest level of service, whatever she undertakes.”

Raden also plans to practice public interest law after graduation and was selected for the U.S. Department of Justice’s Honors Program for the Civil Rights Division, one of the most prestigious appointments in the country for recent law graduates.