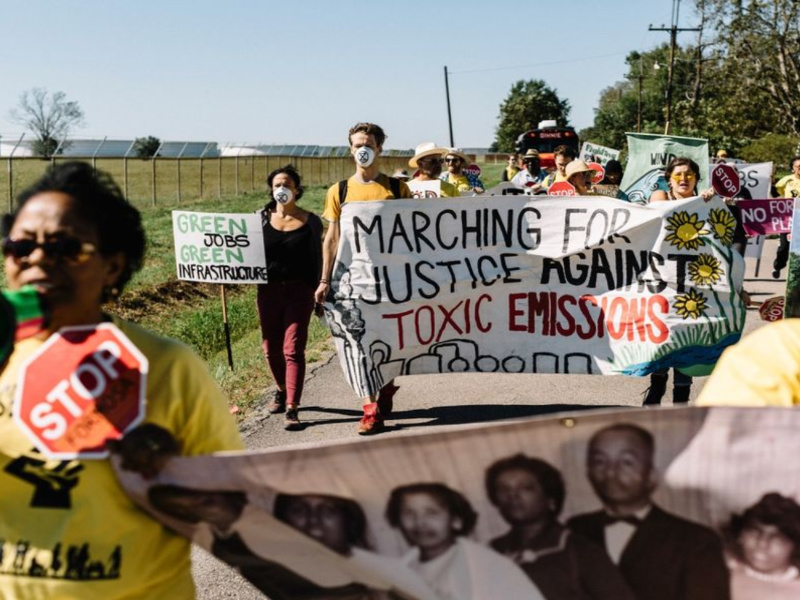 RISE St. James is suing the Town of Gramercy over an ordinance that requires a permit and payment of a $10,000 bond to hold peaceful protests. (Photo Courtesy of RISE St. James)

Tulane Law’s First Amendment Clinic has sued the Town of Gramercy over an ordinance that requires a permit and payment of a $10,000 bond to hold peaceful protests.

The ordinance effectively prevented a grass-roots citizen organization, RISE St. James, from holding a peaceful march opposing Amendment 5 on the ballot for the November 3 election.

As a result, the protest – which was to take place on a route that included Gramercy and the adjacent community of Lutcher – took place only in Lutcher, where Town leaders readily granted the applicants a permit.

First Amendment Clinic Director Katie Schwartzmann and student attorneys Anooshay Asim, Brian Mounce and Jennifer Siew, all third-year law students, argue in the complaint that the ordinance is unconstitutional because:

“This case illustrates exactly why the adherence to the First Amendment matters," said Schwartzmann. "RISE St. James was not able to be heard by the people of Gramercy on an issue that matters greatly to that community. This permitting scheme functioned to silence the citizens, which is deeply offensive to our shared values as Americans.”

The Supreme Court has said that the government may not discriminate between people seeking to exercise their free speech right based upon the content of their speech. The RISE St. James suit asserts that the Gramercy ordinance affords too much discretion on the part of the Mayor and the Board of Aldermen, which allows them to pick and choose which individuals are able to exercise their rights.

Town officials, including Gramercy Mayor Steve Nosacka and Town Attorney Bobby Faucheux, see it differently. The ordinance requiring liability insurance has been on the books for some time, they told Aldermen at a recent public meeting, according to a news report in the News Examiner-Enterprise. They consider the ordinance lawful unless a court rules otherwise.

According to the lawsuit, Nosacka initially told protest organizers they could march, drew up a map of the route they could take, even circumventing a jambalaya sale at a local grocery store. He told them the Town would waive the ordinance fee but reneged within days of that verbal promise. Organizers were left scrambling to find insurance to cover such a high bond.

The suit claims the ordinance does not provide clear guidelines for approvals and denials, and the language is so broad, it effectively outlaws all commercial and political speech, in violation of the Constitution.

Amendment 5 ultimately was not approved by Louisiana voters. Schwartzmann said Gramercy’s ordinance silenced the clients, and even though the Amendment failed, Gramercy should not be able to do so again on future issues.

RISE St. James, founded in 2018 as a citizens' organization, also has been represented by Tulane's Environmental Law Clinic on unrelated cases.

The Tulane Law School launched a First Amendment Law Clinic this fall, with five student attorneys under the supervision of Schwartzmann. The Clinic seeks to defend the First Amendment rights of freedom of speech, press and assembly in Louisiana courts.

“While serving their client, RISE St. James, the Tulane First Amendment Clinic students are also helping Louisiana residents learn more about their own speech protections and the importance of First Amendment freedoms to a healthy democracy," said Stacy Seicshnaydre, Dean of Experiential Learning and Public Interest Programs, whose office is responsible for Tulane’s eight legal clinics.