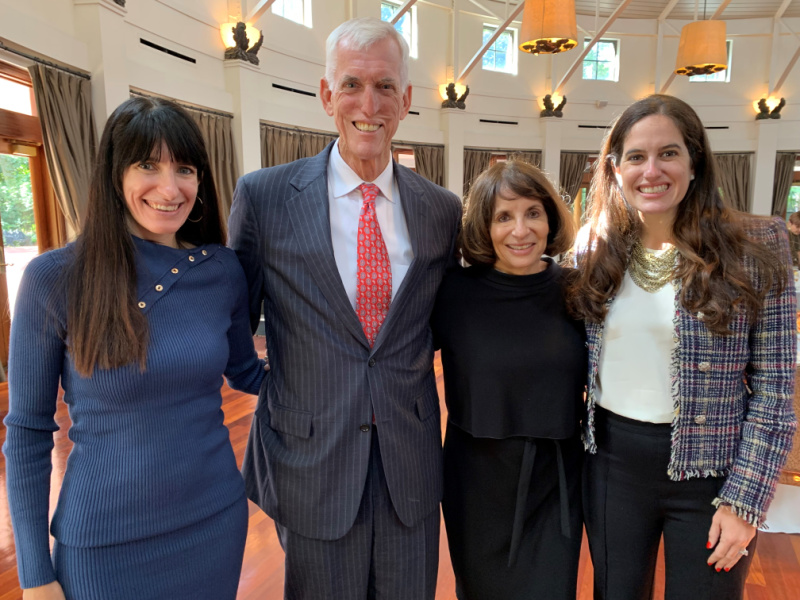 Judy Barrasso (L'81), center, has received the 2022 Hannah G. Solomon Award from the Greater New Orleans National Council for Jewish Women, the most prestigious award conferred by the organization. At a luncheon Oct. 24 she was joined by her husband, Brent Barriere (L'81) and daughters Jennifer (L'12, left) and Ashley (right).

Barrasso, a founding member of Barrasso Usdin Kupperman Freeman & Sarver, received the award Monday for her work as a staunch advocate for women’s rights and civil rights more broadly, and her leadership in the community to promote social change.

“Barrasso has tirelessly worked on the most pressing issues of our time, while always working to advance other women with her,” said NCJW President Gail Pesses. “She embodies the mission of NCJW to improve the quality of life for women, children, and families and has motivated others to fight for enlightenment, progress and positive change in the community.”

In accepting the award at the luncheon, Barrasso honored the many little-recognized people, both lawyers and non-lawyers, who have held firm to principle even at considerable cost to their own career advancement, economic interests and even their personal safety.  Invoking the legacy of Judge John Minor Wisdom (L ’29) and other legendary judges during the Civil Rights era who resolutely enforced desegregation throughout the South, despite fierce backlash and threats of violence and profiled in Jack Bass’s 1981 book Unlikely Heroes, she encouraged lawyers to use their power to defend legal principle at a time of mounting peril to the rule of law.

“Judy Barrasso is a model of the sort of ‘unlikely hero’ she calls the rest of us to be,” said Tulane Law Dean David Meyer.  “She has helped clear a path for countless lawyers who have gone on to careers of great impact and she helped expand access to justice for an even larger number of people in Louisiana and around the country who desperately need the power of law on their side.”

Barrasso is a longtime member of Tulane Law’s adjunct faculty and the law Dean’s Advisory Board. She has been a mentor to Tulane students and a fierce advocate for the law school’s public interest programs. As a Fellow with the American College of Trial Lawyers, she encouraged the law school’s innovative clinical program, The Women’s Prison Project, to apply for the prestigious Gumpert Award, which it won in 2020.

Her longtime service to Tulane was noted when she was honored as a member of the 2018 Class of the Tulane Law Hall of Fame.

Among other leadership roles, she has worked to advance women’s leadership roles both in hiring more women at her firm and as a board member of a number of organizations that champion gender equality. She is a member of the Louisiana Chapter of the International Women’s Forum and mentored college women in their careers as a founder of the organization Dress for Success. She has advocated to see more women in public office and to be appointed to local boards and commissions. She has worked with The Lawyers Committee for Civil Rights Under the Law to protect access to voting and has worked to hold the legislature accountable for fair and equitable redistricting efforts that are representative of diverse groups.

She is a longtime member of the South Central Region of the Anti-Defamation League (ADL) and has been a commissioner of the New Orleans Downtown Development District which built a homeless shelter to aid those facing homelessness.

In her legal career, she has mainly focused on complex litigation, class actions, liability, securities fraud and other commercial litigation. She is a member of the American College of Trial Lawyers and a fellow and President of the International Society of Barristers. She is a Past President of the New Orleans Bar Association and in 2017 was the recipient of the John R. “Jack” Martzell Professionalism Award, presented by the New Orleans Chapter of the Federal Bar Association. She was also the 2016 recipient of the Louisiana Bar Foundation's Distinguished Attorney Award.