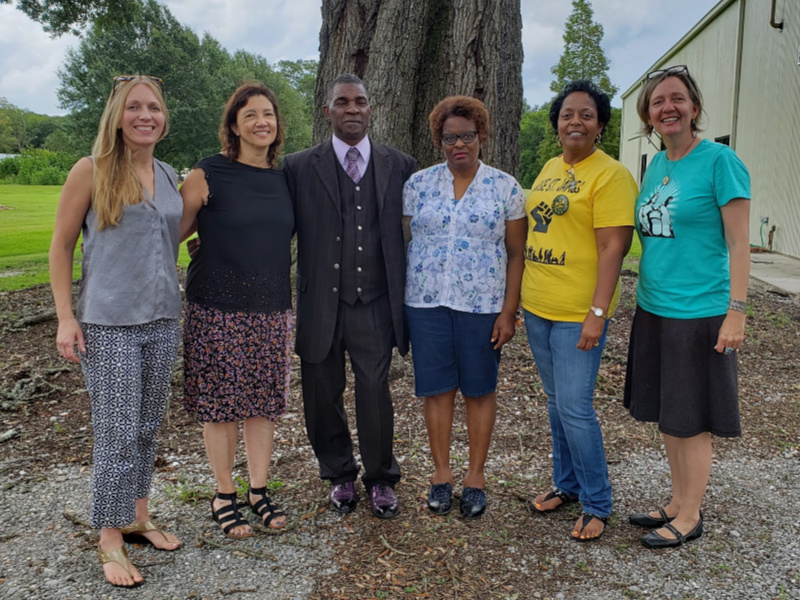 Tulane Environmental Law Clinic staff scientist Kimberly Terrell has been studying the relationship between COVID-19 and air pollution in the River Parishes. The law clinic has represented the residents of St. James Parish, who have long complained of the health impacts of air pollution in their communities. From left to right, is Terrell, Environmental Law Clinic Director Lisa Jordan, and St. James residents Pastor Harry Joseph, Eve Butler and Sharon Lavigne. Far right is Anne Rolfes, Director of the Louisiana Bucket Brigade. (courtesy photo)

The Tulane Environmental Law Clinic’s staff scientist, who has been among the leading researchers connecting elevated COVID-19 death rates to air pollution, particularly in communities of color, testifed Tuesday before the U.S. House of Representatives.

Kimberly Terrell (BS, BA ’05), a PhD scientist with the law school’s legal clinic, testified before the Subcommittee on the Environment, part of the House’s Committee on Oversight and Reform.

The testimony was part of a briefing on “Plastic Production, Pollution and Waste in the Time of COVID-19." Terrell presented her research, which earlier this year found a correlation between elevated COVID-19 death rates and air pollution in Louisiana's River Parishes, an area dubbed "Cancer Alley," which also disproportionately impacts communities of color. She also spoke about the ongoing work of the Tulane Law clinic with residents of St. James and St. John's parishes over the years to help them keep their air clean in a heavily industrial area.

“Many of our clients have been concerned about their air quality for decades," Terrell said. "COVID-19 brings a new sense of urgency to these concerns, given the mountain of scientific evidence that links air pollution with greater susceptibility to viruses that attack the lungs.”

In her testimony, Terrell said that many studies have linked long-term exposure to air pollution with not only respiratory infections, but also many of the same health problems like asthma and COPD that increase risk of death from COVID-19.  In Louisiana, most of the parishes with the highest per capita COVID-19 death rates are in “Cancer Alley”, a heavily industrialized stretch along the Mississippi River, and African American communities carrying the burden of air pollutants that can cause respiratory disease and immune suppression and COVID-19 deaths.

Terrell also pointed out that a nationwide network of air monitors that EPA relies upon to ensure air quality is inadequate to protect public health because most of these monitors are located outside areas with the most severe air pollution.  She explained how industrial emissions are increasing in Louisiana and how the state’s Department of Environmental Quality has worked to reduce such monitoring near the most heavily industrialized communities.

“In Louisiana, the DEQ has sought to systemically reduce [air quality] monitoring, while at the same time permitting massive increases in emissions, particularly in the Lake Charles Metropolitan Statistical Area (MSA),” Terrell’s prepared statement reads. “This area includes Mossville, a community with a rich African American heritage that has been overburdened – to the point of oppression – by industrial pollution.”

“We’re very lucky to have Kim’s scientific expertise on behalf of the Clinic’s clients and as an asset more broadly for our Center for Environmental Law,” said Law Dean David Meyer.

Terrell’s important research has drawn significant interest nationally. Earlier in the year, working on behalf of clinic client Concerned Citizens of St. John , Terrell mapped long-term pollution data from atmospheric scientists at Dalhousie University, the most recent COVID-19 data from the Louisiana Department of Health, and parish-level health data (obesity and diabetes rates) from the Centers for Disease Control.

Her findings: Most of the parishes with the highest per capita COVID-19 death rates in Louisiana are clustered in the industrial corridor from Baton Rouge to New Orleans, where long-term pollution levels are well above the national average. Equally concerning, her study confirms that both air pollution and COVID-19 are disproportionately harming black communities in Louisiana.

She has been adding to her research this summer and has been widely quoted in publications across the state and the nation, including in Wired magazine and Sierra, the national magazine of the Sierra Club, as well as NBC news. Other publications can be found here and here.

Her full study is currently under peer-review and is expected to be published later this year. Her testimony also represents the work by Tulane Center of Environmental Law students and interns who aided her in the research.