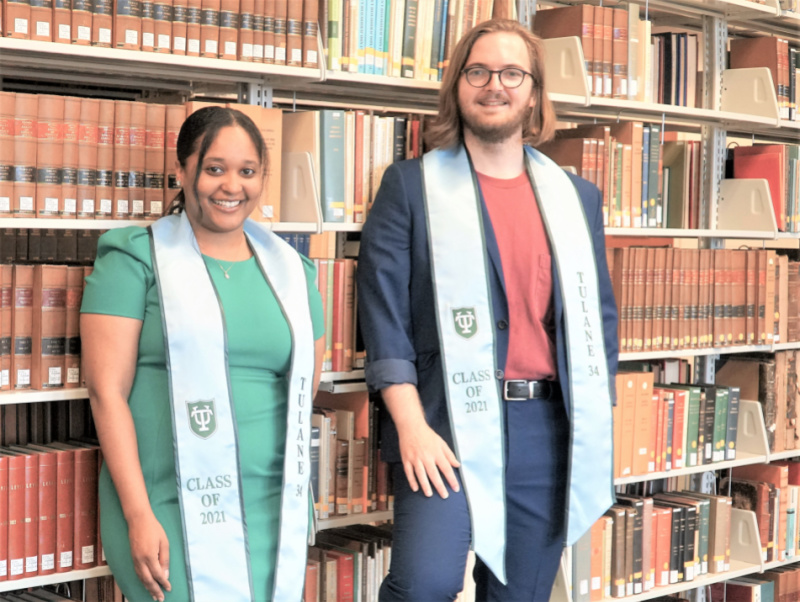 Law school awards signify academic and leadership achievement, hard work and dedication to a profession that changes lives. And it is an added honor to be chosen for an award by a vote of Tulane Law’s faculty.

Two such honors, the John Minor Wisdom Award, focused on academics and writing, and the General Maurice Hirsch Award, which honors a student who has contributed to Tulane and the community, were awarded this year by the faculty to two student leaders, Jacob McCarty and Jayde Encalade, respectively.

The two received the award at the annual Graduation Night Awards event held a few days before graduation in a virtual format.

The two also share another award this year, being two of the three Tulane 34 Award recipients – one of the highest university student honors.

The Hirsch Award, endowed by Mrs. Elise Newman Solomon to honor the life and achievement of General Maurice Hirsch, is presented each year to the graduating student who, by vote of the faculty, has contributed most distinctively and constructively to university or community needs. Encalade, this year’s recipient, was a leading force in diversifying Tulane’s Moot Court Program, was BLSA President and a member of the law school’s Anti-Racism Task Force.

In her law school years, Encalade performed more than 150 hours of pro bono service at the Tulane Legal Assistance Program (TULAP), the Orleans Public Defenders Office, and the Expungement Clinic hosted by the Justice and Accountability Center of Louisiana & The First 72+, in addition to working her third year in the Juvenile Justice Clinic. She has served as a peer mentor to dozens of students, helping them navigate law school’s challenges.

McCarty recieved the John Minor Wisdom Award, endowed in 1987 by the former law clerks of the Hon. John Minor Wisdom.  The recipient must be an outstanding JD candidate who has demonstrated excellence in academic work and in writing ability, has contributed selflessly to the law school community, and who has accepted a federal or state judicial clerkship after graduation.

McCarty arrived in law school after working for several years at the Orleans Public Defenders, where he decided he wanted to become a lawyer and serve vulnerable populations. During his first weeks of law school, he was diagnosed with lymphoma, and he opted for a medical leave. By the time he returned the following year after beating cancer, he threw himself selflessly into giving back to the law school and to achieve academic success.

He served two years as a Harris Fellow and an Academic Support Program Tutor, mentoring and tutoring first-year students as they adjusted to the rigors of law school. And during his second year, he served as President of the Civil Law Society, connecting Tulane students with the New Orleans community and faculty members.

He is a published author and a Notes & Comments Editor for the Tulane Law Review. As Chair of the Law Review’s Diversity Committee, he helped draft recommendations to change the journal’s membership selection process to enhance diversity and ensure the journal’s continued academic excellence.

(You can view the Awards Ceremony here)

Order of the Coif

Order of the Barristers

The Association for Women Attorneys Award

The Edward A. Dodd Jr. Award in Admiralty