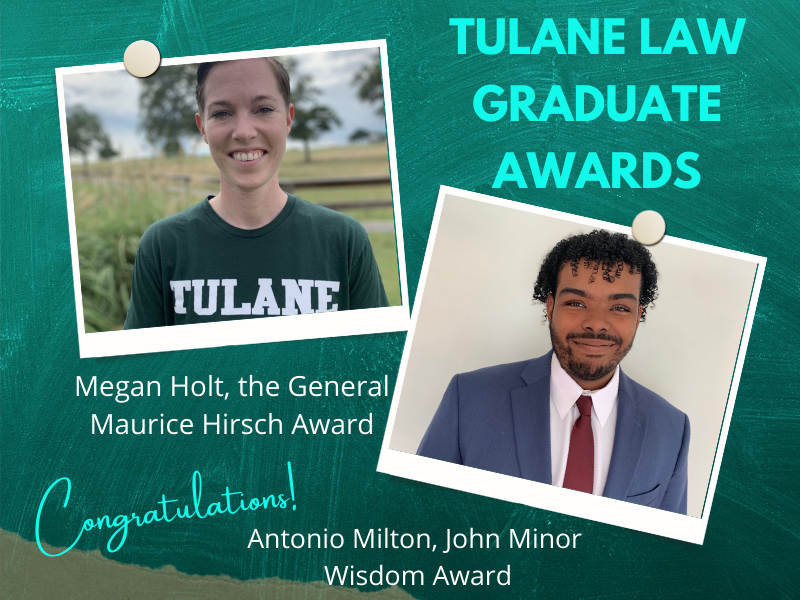 Law school awards signify academic and leadership achievement, three years of hard work and dedication to the profession of law. And it is an added honor to be chosen for an award by a vote of Tulane Law’s faculty.

Two of the law school’s highest honors,  the John Minor Wisdom Award, focused on academics and writing, and the General Maurice Hirsch Award, which honors a student who has contributed to Tulane and the community, were awarded this year by the faculty to two student leaders, Antonio Milton and Megan Holt, respectively.

The two were honored at the annual Graduation Awards Night among their peers, family and friends.

The Hirsch Award, endowed by Mrs. Elise Newman Solomon to honor the life and achievement of General Maurice Hirsch, is presented each year to the graduating student who, by vote of the faculty, has contributed most distinctively and constructively to university or community needs.

Holt, this year’s recipient, has been a tireless leader for her fellow law students, the institution and Tulane as a whole. She served as editor-in-chief of the Journal of Law and Sexuality for the past year, shepherding extraordinary growth in membership on the journal. She also is a leader among our veteran students. When she learned that campus veterans were having difficulties accessing their GI Bill benefits, Holt rallied university officials and helped remedy the problems.

Holt will continue her service to the country by re-entering the U.S. Army as a Captain in the JAG Corps.

Milton received the John Minor Wisdom Award, endowed in 1987 by the former law clerks of the Hon. John Minor Wisdom (L’29).  The recipient must be an outstanding JD candidate who has demonstrated excellence in academic work and in writing ability, has contributed selflessly to the law school community, and who has accepted a federal or state judicial clerkship after graduation.

See a gallery of photos from the Graduate Awards Night!

Milton is the epitome of selfless contribution to the law school. He has served as a Harris Peer Mentor, advising first-year law students, as an Academic Support Program tutor, a clerk for the Tulane Legal Assistance Program, and a member of the Jeffrey G. Miller Environmental Law Appellate Moot Court Team. And if that was not enough, he was elected in his third year to serve as the first Black editor-in-chief of the Tulane Law Review.

After graduation, Milton will clerk for Tulane alumna Chief Judge Nannette Jolivette Brown of the Eastern District of Louisiana and then will clerk for Judge Carl Stewart on the U.S. Fifth Circuit Court of Appeals.

Tulane Law Dean David Meyer and faculty conferred these and other awards Friday, May 20. The full list of award winners is:

Order of the Coif

Order of the Barristers

The Joseph A. Ettinger Award

The Association for Women Attorneys Award

The Edward A. Dodd Jr. Award in Admiralty

For a gallery of photos of this event, go here.