2019 graduates hear message to give back, uphold rule of law 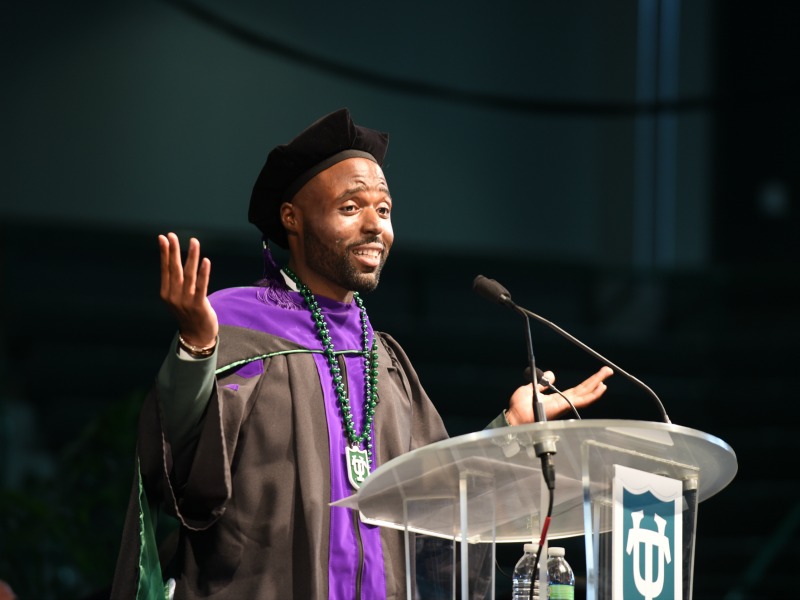 Gerald Williams, the 2019 Class President, thanked his classmates for supporting him through law school and his battle with stomach cancer. (Photo: Tracie Morris Schaefer)

The message of Tulane Law School’s 168th commencement May 18 was about giving back to country and to others through the privilege of the law profession.

Keynote speaker Hon. Judge L. Felipe Restrepo (L’86), urged graduates to take chances in their careers, and to give back through pro bono work, by standing up for democracy, upholding the rule of law and leading by example.

“Hold on to your idealism. Volunteer to do pro bono work. Engage in your community.  Be a champion for the less fortunate, the marginalized, the weak. Find ways to give back -- you’ll be glad you did and it will make you a better person.”

Restrepo, who sits on the U.S. Court of Appeals for the 3rd Circuit in Philadelphia, became a naturalized U.S. citizen at the age of 31.  He spoke of the many oaths he’s taken to uphold the Constitution, but none more important that his oath of citizenship.  He stands as an example of where the legal profession can lead a person – from young immigrant to public defender to federal judge.

“Time has chosen you to be the keepers of our Constitution. You must stand up and defend the rule of law – it is the bedrock of our democracy and what distinguishes the U.S. from the rest of the world,” he told graduates.

The law school conferred degrees on 232 graduates; 169 of them were juris doctors.

Two faculty members received awards given for distinction in teaching. Professor of Criminal Law Janet “Jancy” Hoeffel received the Felix Frankfurter Award, which is given to a full-time faculty member who had demonstrated outstanding commitment to classroom teaching. Adjunct Professor of Energy Law Robert Sloan, a Senior Research Fellow in Tulane’s Center for Energy Law, was awarded the Monty Lemann Award, which is given to a member of the adjunct faculty for outstanding teaching and service. Both were elected to receive the awards by the graduating JD and LLM students.

The graduates represented more than 32 states and dozens of countries around the world. The ceremony was notable for a humbling speech by 3L Class President Gerald Williams, a New Yorker who battled cancer during his three years at Tulane and thanked his classmates for their support through law school.

Calling on the motto of service at Tulane, “Not for one’s self, but for one’s own” Williams told classmates, “You guys are my inspiration.”

He reminded the graduates that “[a]s lawyers, we have an incredible ability to be the change in the world that we would like to see, and therefore it is our duty to build a better world.”