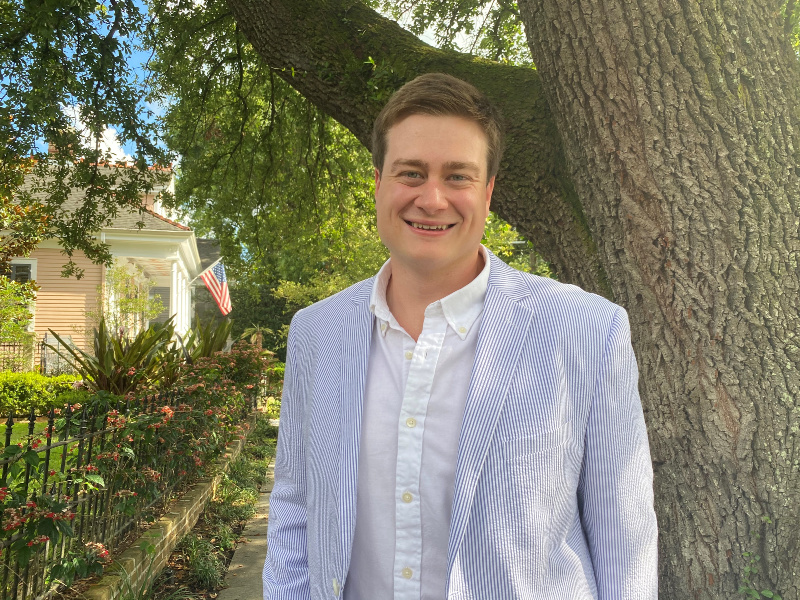 Ryan Niedermair, a 2019 Tulane Law graduate, later this summer joins the Justice Department's Honors Program, a prestigious appointment reached by a select few recent law graduates each year. It was Niedermair's singular goal to join the program from the moment he chose to study law. He is assigned to the DOJ's Dallas office. (photo courtesy of Ryan Niedermair)

He was not supposed to become a lawyer.

Four years of grueling science and medical courses were supposed to earn Ryan Niedermair (L’19) top scores on the MCAT exam, and a spot in a leading medical school.

But as he graduated from Rhodes College in 2015, “I had an epiphany. I realized that was not what I wanted to do.”

Today, Niedermair is a case study in upending an expected career path for what became a deliberate, laser-focused effort to launch a new one. Not just any career, either. He wanted to be among what is arguably the top tier of America’s public interest lawyers, to become a federal prosecutor with the U.S. Department of Justice.

The 2019 Tulane Law graduate did it, almost textbook perfectly. This summer he finishes his yearlong clerkship with a federal judge and enters the U.S. Attorney General’s Honors Program as an Assistant U.S. Attorney in Dallas.

“It was what I wanted and I set myself up from day one of law school to make every decision, to take every internship, to take every class that would help me enter this program,” said Niedermair. “I just dedicated myself to making that dream a reality.”

Niedermair is the second Tulane Law graduate to enter the program this year. The other is Jenna Raden who was accepted as a 2020 graduate and who has already shown her public interest chops, winning a Burton Award, given annually to a select few law students from the nation’s top law schools for exceptional legal writing. Read Jenna's story here.

The Honors Program is among the most competitive and exclusive in the nation. Established in 1953, it is considered the premier entry-level federal attorney recruitment program, attracting candidates from hundreds of law schools each year. The program hires candidates either immediately upon graduation, or after a graduate completes a one-year clerkship with a judge. Every hire must pass a rigorous background check.

Niedermair’s path was different, to be sure. With a bachelor’s degree in biology, an internship in a microbiology lab, and knowing he was not heading to med school, he pounded the pavement for a job – any job -- until he figured out what he did want to do.

Through word of mouth and by sending his resume “to anyone and everyone I could,” he found attorney Roy Cheatwood (L’74) a founding member of Baker Donelson in New Orleans. Cheatwood is legendary among commercial litigators in the region. He has worked on numerous high-profile cases, and at the time, he had taken on a liability case involving the collapse of a massive underground salt dome cavern that triggered a sinkhole in Iberia Parish.  Niedermair became a case assistant and his science background was an asset on litigation that would span years and require massive manpower and research to take to court.

“It was a good way to see if I wanted to practice law, and it was useful that I had a science background and could speak the language,” he said.

Through his work at the firm, he met Tulane Adjunct Law Prof. Matthew Chester (L’04), a white-collar crime heavy-hitter who had come to Baker Donelson from the Justice Department’s corruption unit in New Orleans. There, Chester had amassed successful prosecutions of corrupt public officials, and managed high-profile financial crimes cases. He had been part of the team that prosecuted former New Orleans mayor Ray Nagin who was convicted in 2014 on a raft of corruption charges, ranging from wire fraud to bribery and tax evasion.  A Tulane Law graduate, Chester’s experience on that case, and others, attracted Niedermair’s attention.

“I think he did some googling, because he asked me a lot about working on those types of cases,” said Chester. “Ryan is a great guy – persistent, gregarious, and inquisitive. The more I spoke to him, it became clear to me that was the path that he wanted to take.”

Chester became a kind of informal mentor, and brought Niedermair in to do clerk-type legal work on some of his cases.

“He enjoyed it, and I enjoyed working with him, and frankly, I was happy to have the help,” Chester said. It is something that many law students don’t think about, to reach out and talk to alumni that are 10-15 years out of law school and get advice. Ryan truly did all the right things.”

Niedermair took all that advice and constructed his plan.

“He talked so passionately about the work and how much he enjoyed it, and working with him on some white-collar cases, I realized that’s what I wanted to do,” Niedermair said.

The first in the family to become a lawyer, Niedermair had no example to follow. Chester’s mentorship went from work colleague to the person who helped Niedermair map out a plan and navigate law school once he was accepted.

“From day one I knew I wanted to be on (The Tulane) Law Review, I knew I wanted to work in the criminal clinic, I knew where I wanted to work each summer. And, all along, I spoke to everyone and anyone who came to the law school to speak – visiting judges, district attorneys, alumni,” Niedermair said. “These people, even if they never hire you, can show you any of a number of ways to get to your goals. They took a different path, for example. They know someone.”

He mastered the art of networking. His first year of law school, he took a job as a Summer Law Clerk at the U.S. Attorney’s Office. His second summer, he did litigation work primarily in intellectual property, commercial litigation and transactional law at both Liskow & Lewis in New Orleans and at Vinson & Elkins in Houston.

In between, he navigated Tulane Law School and gleaned expertise from his professors. Criminal law guidance from Prof. Janet “Jancy” Hoeffel, all things civil law from Profs. Sally Richardson and Ronald Scalise (who is also the faculty advisor of the Tulane Law Review and the editor of the Louisiana Civil Code). He became Scalise’s research assistant.

His first year, he took Prof. Erin Donelon’s required Legal Research and Writing course for first-year law students;  by his third year of law school, Niedermair became one of her Senior Fellows, mentoring the first-years.

“The research and writing skills I learned from her made me a strong clerkship candidate and her career advice is second to none,” Niedermair said.

Donelon saw something else. She saw a very good student who connected with people and got results.

“What really sticks out about Ryan, in addition to his intellect, is his genuine personal warmth. He greeted everyone in the building by name,” said Donelon. “Because he is so friendly, he quickly established an easy rapport with the 1L students he mentored in the legal writing program. He also had a remarkable ability to multi-task. He balanced his classes, Law Review, senior fellow duties, and work in the criminal clinic with energy and enthusiasm. He was a model student in every way.”

Niedermair took courses in both Common Law and Civil Law (Tulane being one of the few law schools that teaches both) because it enabled him to in or outside of Louisiana.

In his third year, he joined the Criminal Justice Clinic under the Director of Prof. Katherine Mattes, “and that was a huge turning point for me. Louisiana’s justice system is notorious by any standard. I worked with people who had spent most of their adult life in prison, I argued a motion in court, I wrote briefs. There is nothing like it, to get the experience of a first-year associate at a law firm while you’re still in law school.”

He took part in a clinic program that teaches inmates to become "substitute" counsel for other prisoners.  All the while, the clinic experience made him see the role of a prosecutor differently. “You see the other side of a prosecution and you have to honor how serious a responsibility this is,” he said.

Niedermair has new goals. Of course, he wants to succeed as an Asst. U.S. Attorney. He also wants to work with Tulane to encourage other students to work towards the Honors Program.

“Any student, regardless of the path they take, has huge resources at Tulane. The education, the network of alumni. I started with my professors. For me, whether it was Hoeffel, (Keith) Werhan, Scalise, Richardson, Donelon – I let everyone know about my goal. I asked their advice, their guidance. They all helped me, encouraged me, and guided me.

“Anyone can apply for this and if you show your dedication to the field, if your resume screams ‘criminal law’, just go for it,” he said. “I would like to see more students work toward that path because it’s an incredible opportunity.”

Chester, his mentor would agree. He goes a step further, though. Lawyers join DOJ from many different career points – right out of law school, working in private practice, or coming from Big Law, he said.

“It’s an incredibly humbling experience to go to court and say ‘Matt Chester on behalf of the United States.’ It is a fantastic opportunity to really understand the system, its benefits and its downfalls.  Being a federal prosecutor is simply incredibly rewarding.”