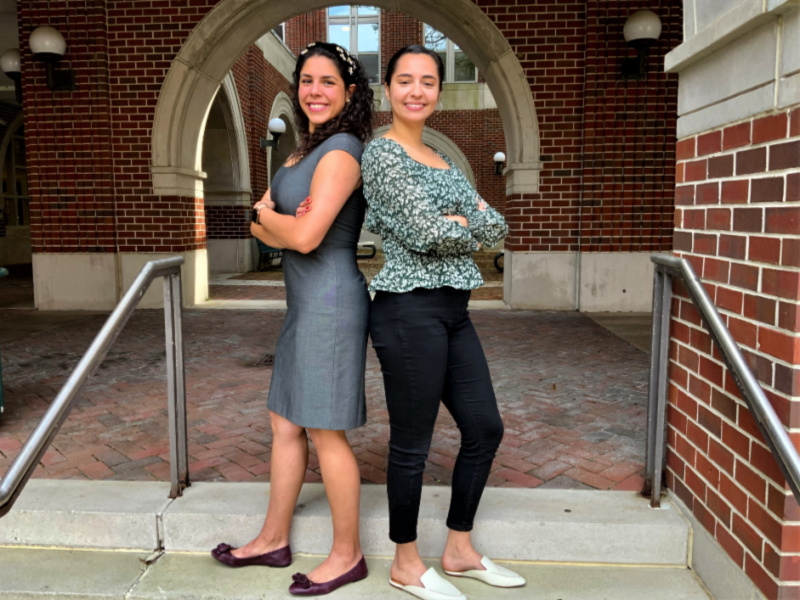 (L-R): Gabriela Cruz and Sandra Zadeyeh, both third-year law students, were chosen as Immigrant Justice Corps Fellows, and will serve two years after graduation working with organizations that help migrants.

Louisiana has one of the highest immigrant detainee populations in the nation, housed mostly in for-profit immigration detention centers, yet suffers from a scarcity of immigration lawyers.

“Louisiana has become an immigration incarceration destination, creating an access to justice crisis,” said Prof. Laila Hlass, Co-Director of Tulane Law School’s Immigrant Rights Clinic and Director of Experiential Learning.  “Expanding detention here leaves the vast majority of immigrants to represent themselves in their cases, even though we know that immigrants with attorneys win at rates five times greater than those without.”

The Clinic is one step closer to its goal: It was selected to be among the first Immigrant Justice Corps (IJC) sites in Louisiana, joining a premier immigrant defender training program in the country.

“We’re thrilled to join the ranks of IJCorps hosts—a list of truly remarkable organizations that are committed to training the next generation of immigrant defenders and providing zealous advocacy to immigrant communities,” said Prof. Mary Yanik, who is the Director of the clinic along with Co-Director Hlass. “We are deeply grateful for this investment in our program and in our region, which continues to see overwhelming need and too-scarce legal resources.”

Tulane was chosen along with one of its partner organizations, Immigration Services and Legal Advocacy (ISLA), run by Tulane Law alumni Homero Lopez (L’10) and Allyson Page (L’14). ISLA will host two IJC Corps fellows; together with Tulane, it increases the reach of immigration attorneys in New Orleans.

IJC’s primarily focus is to find promising lawyers and advocates around the country who are passionate about immigration and place them with legal services and community-based organizations where they can make the greatest difference. The organization also supports them with training and expert insights as they directly assist immigrants in need.

Cruz will stay with Tulane’s clinic for two years after graduation, taking cases in removal defense, and working with children and litigating habeas cases to seek the release of detained immigrants. She was part of the first cohort of students in the Immigrant Rights Clinic.

“I am deeply grateful to my mentors and professors, Profs. Yanik and Hlass, who motivated me to become a student attorney in the Immigrant Rights Clinic,” said Cruz. “It was their guidance, empathy, and support that made me believe in myself and apply for the IJC fellowship. Good teaching can make a big difference. I would have never applied for this fellowship had they not told me I was good enough and qualified. They believed in me.”

Zadeyeh, who is an alum of the Immigrant Rights Practicum, will work with The International Rescue Committee in Phoenix, Ariz.

“I knew I wanted to practice immigration law when I applied to law school, so the IJC Fellowship is a dream come true for me,” Zadeyeh said. “I am excited to be able to continue working directly with immigrant communities while also forging connections with like-minded individuals in the field committed to making meaningful and lasting change to the immigration laws in this country. I owe a huge thanks to Tulane's Immigrants Rights Practicum and Tulane's Domestic Violence Clinic for helping me develop core lawyering skills and for giving me practical experience with clients.”

Funded last year by a gift of $400,000 by the Silicon Valley Community Foundation, the Immigrant Rights Clinic aims to systemically address the immigrant detention crisis, through strategic litigation and advocacy with clients and communities, while training the next generation of advocates. Louisiana continues to play a central role in the nation’s immigration crisis. The state has the second largest immigrant detainee population (second only to Texas).

In its inaugural year, the clinic has lodged a series of successes: More than six student-attorneys participated, working with practitioners on cases ranging from bond hearings to petitions for status for children and families. Hlass and Yanik were named Bellow Scholars, a prestigious program that will support their continued research on the immigration crisis and access to justice for detainees.

And Yanik was barely at Tulane a few weeks this summer when a case that she and Hlass had worked on with Tulane Law students made headlines. The clinic secured a special victim of labor trafficking visa for Jose Torres, an immigrant advocate who had lived in a Mid-City church for months to seek sanctuary from deportation. With that visa, Mr. Torres can apply for permanent residency and eventually, U.S. citizenship.