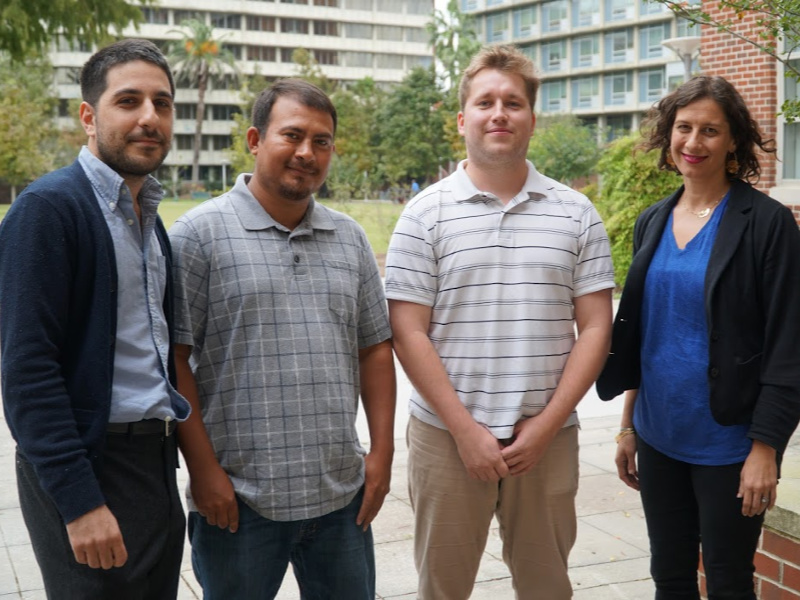 Jose Torres, center, an immigrant activist who lived eight months in a New Orleans church, now has a path to citizenship with the help of the Tulane Immigrant Rights Practicum. Students and faculty, including Prof. Laila Hlass (far right) and MaryYanik, helped shepherd his case all the while giving students like Marshal Garbus (left) and Nate Hall (center, right), both 2019 graduates, skills training in immigration law.

José Torres, a noted immigrant rights leader who had worked with Tulane Law students and faculty to prevent his deportation, was granted legal status as a survivor of labor trafficking.

The formal change in his immigration status is a significant victory that ends a years-long standoff with the New Orleans ICE Office which pursued his deportation despite Torres having been a victim of labor trafficking and seeking a trafficking visa.

“Now I finally feel freedom and it is beautiful,” said Torres, reflecting on his win. “This would not have been possible without the support of my community, my family, and all the people of New Orleans, who gave me the strength to stand up for my rights and resist deportation. I remember first seeing signs that read ‘José Is My Neighbor’ and thinking that God is helping me through this nightmare. Only by unifying ourselves can we make our voices louder and stronger.”

Torres made national headlines in 2017 when he sought sanctuary in First Grace Methodist Church after ICE ordered him to leave the country. In 2018, after nearly eight months in sanctuary and amid mounting public outcry, ICE granted him a temporary reprieve from deportation. Tulane students, through the newly-created Immigrants Rights Practicum under the direction of Profs. Laila Hlass and Mary Yanik, worked to prevent his deportation.

That temporary reprieve enabled Torres to leave the church but required him to report to ICE’s offices regularly. This week’s win of trafficking status will end his mandatory reporting with ICE, protect him from re-arrest by immigration officials, and provide him and his family with a pathway to work, get green cards, and eventually, citizenship.

“We’re so proud that Tulane’s students and faculty could play a role in winning justice and fair treatment for Jose Torres,” said Law Dean David Meyer.  “The impact they were able to achieve underscores the importance both of the Practicum and of Tulane’s new Immigrants Rights Clinic.”

Torres is a long-time leader with the Congress of Day Laborers, an immigrant rights group that is a project of the New Orleans Workers’ Center for Racial Justice. He has lived in New Orleans for 20 years, initially arriving to work to rebuild the city after Hurricane Katrina, and has campaigned against wage theft and spoken out about human rights abuses in for-profit immigration detention centers.

“In this moment where communities of color are under attack on all fronts, this win gives us hope,” said Rocio Aguilar, organizer with the Congress of Day Laborers. “We are so happy for José and we recognize his incredible courage and leadership in standing up for himself and inspiring others. This shows what communities united can accomplish together, even in these difficult times.”

Torres was represented in his visa application by attorneys and professors Yanik and Hlass and Tulane law students working under their supervision. Yanik is the new director of the Tulane Immigrant Rights Clinic which was launched this summer thanks to a generous grant. The clinic joins seven others that provide legal skills-training for students, and much-needed access to justice for clients.

“This approval issued by the immigration agency confirms what we knew all along: Jose is a survivor of labor trafficking and entitled to remain in the U.S.,” said Yanik, “His harrowing journey, including months of confinement in the church, shows everything that is wrong with our current immigration system. ICE’s relentless pursuit of his deportation enables human trafficking and deters victims from coming forward to report the horrific crimes against them that are happening in our midst.”