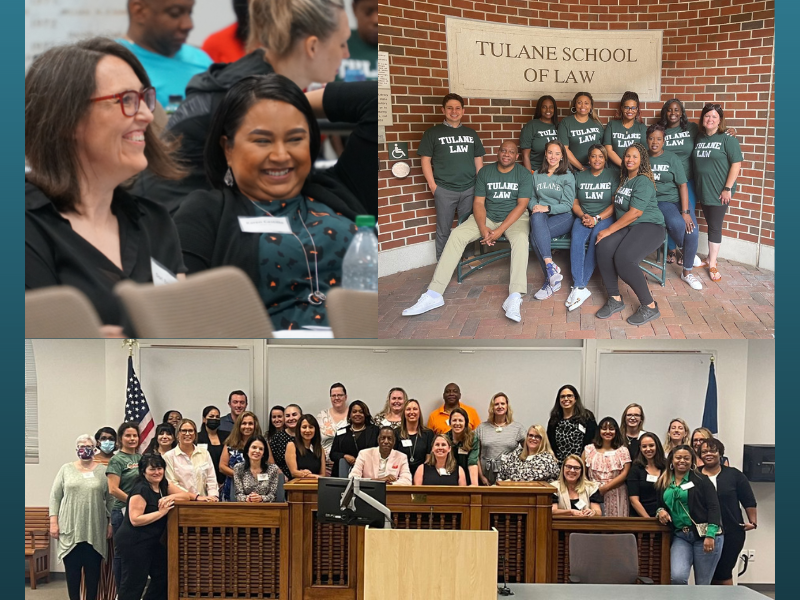 Tulane MJ-LEL students work remotely during the year, and come to campus in the summer for an immersion weekend to connect with each other, their professors and Tulane Law School. (photos courtesy Tulane Law Online Programs)

Now enrolling hundreds of students, Tulane’s online programs are regularly recognized among the top 10 in the country in educational quality.

Professor Saru Matambanadzo, a longtime professor in the MJ-LEL program, has assumed the top leadership role as Senior Director of Online Legal Education, overseeing the entire landscape of Tulane’s online educational programs.  In addition, Matambanadzo will serve as the Faculty Director of the Master of Jurisprudence in Labor and Employment Law program, with responsibility for its curriculum, faculty, and student experience.

“One of my favorite aspects of the Tulane MJ programs is that they offer life-changing education to our graduates.  The education our students receive at Tulane changes their lives, providing space to build confidence and develop competencies for often unimagined paths,” said Matambanadzo.

Matambanadzo is the Moise S. Steeg Associate Professor of Law and a nationally known authority on gender and workplace equity. She earned her JD from Harvard Law School and joined Tulane’s faculty in 2010 after receiving a PhD in women’s studies from UCLA. In 2014-15, she was Tulane Law’s inaugural Gordon Gamm Faculty Scholar, an award to support the work of outstanding scholars. In 2016, Professor Matambanadzo served as the chair of the American Association of Law Schools Section on Sexual Orientation and Gender Identity Issues.

Elizabeth Townsend Gard, the John Koerner Professor of Law, will serve as Deputy Faculty Director of the MJ in Labor & Employment Law, with special responsibilities for promoting the program through social media and cultivating stronger ties with its growing alumni base. Also a longtime professor in the program, Townsend Gard has taught intellectual property in the context of employment law and business practices across the country.  She is also Director of the Tulane Center for IP, Media & Culture and specializes in Intellectual Property law, including copyright, trademark, and comparative intellectual property; and entrepreneurship, including social entrepreneurship, solopreneurs, and handcraft-entrepreneurs.

Davis joined Tulane Law School in 2007 as a senior research fellow and founding director of the Tulane Institute on Water Resources Law and Policy. In 2017, he also became the director of Tulane University’s ByWater Institute which is focused the interdisciplinary aspects of water stewardship and community resilience.  In 2018, he became Director of the Tulane Center for Environmental Law. He is currently the Robert Cudd Research Professor of Environmental Law at the law school.

Dalbom worked for one year as a postgraduate fellow at the Tulane Institute on Water Resources Law and Policy after graduating from Tulane Law, before becoming the Institute's Program Manager and later the Assistant Director. He has done extensive work on legal and policy issues relating to interstate water compacts, comparative water law, Mississippi River management,  the RESTORE Act and other revenue streams associated with the Deepwater Horizon disaster, and coastal and water management.  He currently leads the Institute’s efforts to draft a comprehensive water code for Louisiana.

Jozette Kauffman, who has led student recruitment and advising efforts since the program’s founding, will take on new and broader leadership responsibilities as Staff Director of Online Legal Education, managing a  recently expanded and outstanding staff team. Kauffman joined Tulane Law in 2015, and has done all for the program, from being a de facto dean of admissions, to dean of students and program administrator. The programs during her tenure have grown from one – the Master of Jurisprudence in Labor and Employment Law – to four, including an extensive certificate program.

“The new team will build and expand on our online programs, leveraging the outstanding foundation Joel Friedman built in founding our programs,” said law Dean David Meyer. “I am very grateful to each of these colleagues for agreeing to take on these new leadership roles.”